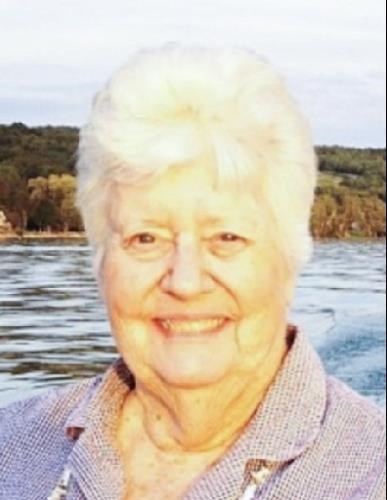 FUNERAL HOME
Burns Garfield Funeral Home - Syracuse
3175 East Genesee Street
Syracuse, NY
Anne (Dawson) O'Malley October 26, 2021 Our loving mother Anne died peacefully this week at The Menorah Park at the age of 94. Anne was a Syracuse native born October 5, 1927 to the late Genevieve (Quigley) and Harold Dawson of Syracuse. She was a Nottingham High School Graduate Class of 1945 and St. Lawrence University in 1949. Anne was also a member of Pi Beta Phi at St. Lawrence in which she took such pride. Anne was married to John Francis O'Malley, a WWII Marine veteran and career Syracuse Police Officer, in 1950 and was widowed in 1985 after Dad died too young. Anne raised her four children in Syracuse while working as a social worker for Onondaga County and as a social worker for the Syracuse City School District for many years. She also worked for the Jamesville DeWitt School District for thirteen years until her retirement in 1986. Anne loved children and education and so served on the East Syracuse-Minoa School Board of Education for eight years- all while five of her grandchildren were attending ES-M schools. Anne also spent several years employed by Le Moyne College in various capacities. Mom loved traveling in her later years visiting relatives in Ireland, and ventured on to Athens, Rome, London, Paris, and Hawaii with our dad over the years. Anne had literally dozens and dozens of friends and relatives in Central New York and enjoyed Bridge Clubs, Home Bureau for 55 years, reading and crocheting all while raising a family. Her family roots also included some 90 or so years of living seasonally and enjoying Otisco Lake where her grandfather built the Dawson Family Camp in the early 1900's. She also loved her golfing years with her league as well as water and snow skiing- teaching us by example. Anne was predeceased by her sisters Virginia Welch and Jean Brown. She is survived by her sister Cynthia Darrigan (Andy), of Colorado Springs. Anne is survived by her four children: sons Michael O'Malley (Deborah Ridgeway) of Orlando, FL, John F. O'Malley Jr. (Kathy Klee) of East Syracuse, Peter O'Malley (Pamela Ferris) of Manlius, and daughter Cindy Debbold (Kent) of Otisco Lake; twelve grandchildren: Patrick O'Malley, Kelly Dutton, John O'Malley III (Jenica), Alexandra Budwey (Brandon), Casey DiLaura (Tom), Jessica Albanese (Brian), Brady O'Malley, Stephanie O'Malley, Sean O'Malley, Melissa Turner (Scott), Christopher Ridgeway (Jenny) and Jeffrey Ridgeway; and twenty beautiful great-grandchildren, all of whom she loved dearly. She is also survived by many loving nieces, nephews, cousins, and friends. We believe Anne's last wishes would be to be remembered as a loving Mom, Wife, Grandma, Great-Grandma, Aunt, and Cousin and a special Friend to so many people whose lives were touched and influenced by her. Over the years, she was a role model and counselor to so many who loved her. She will be missed by all whose lives were blessed to be touched by her kindness, wisdom and understanding, and genuine love of life. She took great comfort knowing that she'll be reunited with our Dad after so many years. She will be missed! Calling Hours will be held on Thursday, October 28, 2021 from 3-5 PM at Burns-Garfield Funeral Home, 3175 East Genesee St. Syracuse. Funeral Services will be on Friday, October 29, 2021 at 10:30 AM at the funeral home, followed by a private burial in St. Mary's Cemetery, Dewitt. www.burnsgarfield.com