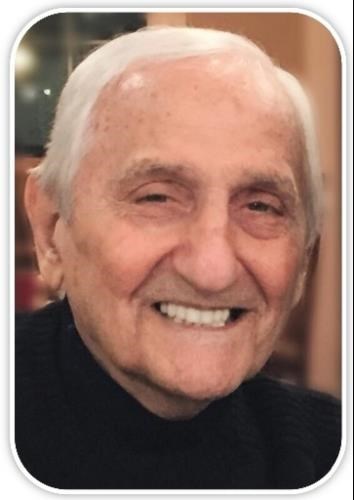 BORN
1934
DIED
2019
FUNERAL HOME
Thomas J. Pirro Jr. Funeral Home
3401 Vickery Road (corner of Buckley Road)
North Syracuse, NY
Frank P. Cappelletti June 15, 2019 Frank P. Cappelletti, 85, of Syracuse, passed away Saturday, June 15, 2019 at home. He was born on January 31, 1934 in Syracuse to the late Filomeno and Mary Frances (Posato) Cappelletti. He was a loving and devoted husband to his wife of 55 years, Joan (Lawler), an inspiring dad to six children and dedicated and supportive "Pop Pop" to eighteen grandchildren. He grew up on the Northside and was proud of his Italian heritage. He graduated from Christian Brothers Academy in 1953. While at CBA he was an outstanding athlete lettering in football, basketball and baseball. He then enlisted in the US Army where he was stationed in Trieste, Italy. He was a 1960 graduate of Villanova University where he was captain of the football team and selected UPI honorable mention All American his senior year. Frank began his career at Christian Brothers Academy serving as teacher, football and basketball coach and athletic director. In 1970 he began work at Bristol-Myers Squibb as a pharmaceutical sales representative later becoming a district sales manager. Frank was honored for his athletic achievements with inductions into both the Christian Brothers Academy and Greater Syracuse Sports Halls of Fame. The football field at CBA is named in his honor. Frank was predeceased by his brothers and their spouses, Nicolas (Muriel) Cappelletti, Lawrence (Alice) Cappelletti, John (Mary) Cappelletti, Cosmo (Gloria) Cappelletti, Jack (Vera) Cappelletti and Thomas (Mary) Cappelletti; sisters and their spouses, Loretta Cappelletti, Anna (Tony) Nappi and Stella (Richard) Lansing; brothers-in-law, Dominick DeRegis and William Lawler; sister-in-law, Barbara Lawler and in-laws, Dr. William A. (Gertrude H.) Lawler. In addition to his wife, Frank is survived by his sons, William of Fayetteville and his children, Matthew, Riley, Katherine and Josephina, Joseph (Lisa) of Sherman Oaks, CA and sons, Griffin, Lucas and Owen; daughters, Kathleen (James) Gibson of DeWitt and daughters, Hannah, Emma and Gabriella, Margaret (Franck) Philip de Laborie of Montreal, QC and daughters, Isabelle, Cecilia and Helena, Elizabeth (Christopher) Walker of DeWitt and children, Ryan, Juliana and Taylor and Patricia (Christopher) Bevans of Baldwinsville and sons, William and Colin; two sisters, Dolly (Peter) Asterino and Josie DeRegis; one sister-in-law, Sister Mary Linda Lawler DC, along with many nieces and nephews. Frank touched the hearts and lives of so many. He was a kind and humble man; respected and admired and a role model to many who knew him. He was an avid reader with a lifelong love of learning. He will be remembered as a man of great character and deep faith who above all cherished his family. A funeral mass and celebration of Frank's life will be held at 10:00 am Saturday, June 22, 2019 at Holy Cross Church, DeWitt, NY. Entombment will follow at St. Mary's Cemetery, Our Lady of Hope Mausoleum. Family and friends may call from 4pm to 7pm, Friday, June 21, 2019 at Holy Cross Church, 4112 E. Genesee St., DeWitt, NY. In lieu of flowers, donations may be made to The Daughters of Charity, 96 Menands Road, Albany, NY 12204. Words of comfort may be expressed at tjpfuneralhome.com