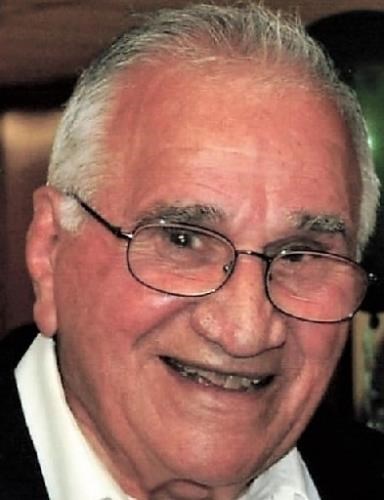 BORN
1921
DIED
2021
FUNERAL HOME
Thomas J. Pirro Jr. Funeral Home
3401 Vickery Road (corner of Buckley Road)
North Syracuse, NY
Patrick C. "Doc" Tortora July 15, 2021 Patrick C. "Doc" Tortora passed away peacefully on Thursday, July 15, 2021 at the Crouse Community Center in Morrisville where his family gathered to share their final moments of love. Born on November 6, 1921 to Raphael and Marie Tortora, Pat grew up on the north side of Syracuse with seven brothers and one sister and attended Central High School. In 1942 he enlisted in the Army Air Corp and was sent to Europe with the 95th Bombardment Group / 336th Bomb Squadron to serve as a Technical Sergeant on B-17s. On a mission in July of 1944, Pat's plane was shot down over Germany and both he and his plane were reported as "missing in action" to his family members and future wife back home. Having parachuted from the crashing plane, Pat and one of his fellow crew members hid from the enemy in barns and ditches by day and milked cows by night until they were spotted by members of the Kalmes family who ignored the German imposed death penalty for harboring an enemy and took them into their home. For three months, every night as the Germans searched the village, Pat and his fellow crew member would hide in a large baking oven that was hidden behind a hutch in the family kitchen until Patton's tanks rolled into the village in November of 1944. For his service, Pat was the recipient of two Purple Heart medals. Throughout his life he kept in touch with the Kalmes family and often returned to Luxembourg to re-live his days in their oven. On his return from Europe, Pat married the love of his life, Sue Zoccali, with whom he shared 76 years of marriage and raised three children. Pat spent a career as an Agent for Metropolitan Life Insurance and on his retirement went to work for the Town of Cicero as a Codes Enforcement Officer. He served as Commander of the Liverpool American Legion, Post 188 and was a member of the Disabled American Veterans. Always colorful in life, Pat was an avid golfer, wood worker, water color artist and baker. He loved a good party and was famous for extending an evening by inviting everyone back to his house after a night on the town, without telling his wife. "Doc," as his family and close friends knew him, was the glue of an extended Italian family and kept everyone in touch and made sure everyone showed up at all family events. For Doc, family was the most important thing in his life. He is survived by his wife, Sue and children, Patrick (Shelly) Tortora, Suzanne (Larry) Lively, Cindy (John) Hunter; three grandchildren; five great-grandchildren; along with many nieces and nephews. Calling hours will be held on Monday, July 19th from 4 - 7 pm at the Thomas J. Pirro Jr. Funeral Home, 3401 Vickery Road (corner of Buckley Road) North Syracuse. A Mass of Christian Burial will be held on Tuesday, July 20th at 10 am in Our Lady of Pompei Church, 301 Ash Street, Syracuse. Entombment will follow in St. Mary's Mausoleum, DeWitt. In lieu of flowers, contributions in Patrick's name may be made to Honor Flight Syracuse, P.O. Box 591, Syracuse, NY 13209. WORDS OF COMFORT MAY BE EXPRESSED AT TJPFUNERALHOME.COM

Published by Syracuse Post Standard from Jul. 16 to Jul. 18, 2021.
MEMORIAL EVENTS
Jul
19
Calling hours
4:00p.m. - 7:00p.m.
Thomas J. Pirro Jr. Funeral Home
3401 Vickery Road (corner of Buckley Road), North Syracuse, NY
Jul
20
Mass of Christian Burial
10:00a.m.
Our Lady of Pompei - St. Peter Church
301 Ash St, Syracuse, NY
Funeral services provided by:
Thomas J. Pirro Jr. Funeral Home
MAKE A DONATION
MEMORIES & CONDOLENCES
Sponsored by The Family.
7 Entries
Dear Mrs. Tortola, Your husband stands out in my mind as a loving husband, father, & friend. As a young girl, I so enjoyed sharing in the laughter whenever the Tortoras were around. I am so sorry for your loss but know that love endures, and special people are never forgotten. Peace and love to you.
Carolyn Nigro Meisner (daughter of Jerry and Phyllis Nigro)
July 21, 2021
I didn't Know Your Dad thou I Loved Reading about such An Interesting Life He had . You should Feel Very Blessed to Have Had Him In Your Life . Peace & Kindness to Ya'll . Tom
tom soule
Other
July 21, 2021
Please know that my thoughts and prayers are with all of you at this time. We all have such wonderful memories to cherish and may you find comfort with those around you.
Peggy Baroni
July 19, 2021
"If you say a man's name, he is still alive." This Patriot will be missed.
Sherry & Scott Smoke
Other
July 18, 2021
I could not have had a better god father, Uncle Pat was the best!! My thoughts and prayers are with all of you today and always
Everett Baroni
July 17, 2021
Aunt Sue and the Family. My memories of Uncle Pat and the whole Tortora Family make me smile. My sincere sympathy and prayers go out to everyone. May he Rest In Peace and God comfort you in your time of need.
Richard Isaacs
Family
July 17, 2021
Pat was our first Insurance man when we got married. He was a wonderful gentleman. Our sincere sympathy to the family.
Peter Monteleone
July 17, 2021
Showing 1 - 7 of 7 results