Lawrence O. Walls
Lawrence O. Walls Larry Walls was born the youngest son of a farmer on May 13, 1937, in Robinson, Illinois. He lived a selfless life always putting the needs of others before his own. Larry embodied the spirit of a servant leader. He was a devoted husband, father and a friend to everyone that knew him. The service will be held at 10 a.m. EST Wednesday at the Woodville United Methodist Church. The burial will follow immediately after at the White Church Cemetery. The viewing will be from 4 to 6 p.m. EST Tuesday, at Culley's Meadow Wood Riggins Road Funeral Home and one hour prior to the service at church. He served honorably in the United States Air Force for 21 years. During his time in the military, he was awarded the Bronze Star Medal for ground actions during the Viet Nam War. He was also the recipient of the Air Force Commendation Medal, Meritorious Service Medal and numerous other citations and awards. He retired after achieving the rank of Master Sergeant. After retiring from military service, he worked another 20 years for the State of Florida's Department of Transportation. Larry was an active member of the Woodville United Methodist Church for 32 years often serving as lay leader. He was preceded in death by his parents, five brothers, and a daughter, Toni. Larry is survived by his wife of 47 years, Carol; a son, Billy and his wife, Bonnie; sister-in-law, Anne Pelt; sister-in-law, Lois Walls; as well as his grandchildren, Michael, Matthew, Rachel, Rebekah, Mitchell; and numerous nieces and nephews. The family would like to thank Dr. Rick Damron, Medical Group of North Florida, the good people of Capital Regional Medical Center and Big Bend Hospice for their loving care of Larry.
Published by Tallahassee Democrat on Jan. 4, 2010.
To plant trees in memory, please visit the Sympathy Store.
MEMORIAL EVENTS
To offer your sympathy during this difficult time, you can now have memorial trees planted in a National Forest in memory of your loved one.
MAKE A DONATION
MEMORIES & CONDOLENCES
24 Entries 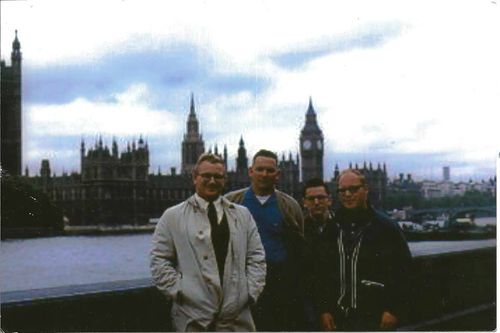 Bill Elliott
Served In Military Together
July 2, 2020
Carol and Family: I served with Larry in Wiesbaden (Det 2 on Camp Pieri) back in the 60's. It was a pleasure to work with him. He guided and trained a lot of the younger troops. Although it has been a few years now, I certainly enjoyed seeing him at the 2001 reunion in Bstimore, MD
Don Cork
January 30, 2010
Carol and family........I served with Larry in Wiesbaden, Germany some 45 years ago.......he was a wonderful person to be around and has never been fogotten by all of us who worked and enjoyed his presence at Det 2, Camp Pieri.
So Sorry for your loss.......
auggie
Richard D'Augustino
January 28, 2010
I have wonderful memories of Uncle . I was still at home --he was my favorite Uncle. Our lives went in different directions. A
Aunt carol this is Marilyn Walls Hetrick. I live in California.I TRIED TO KEEP IN TOUCH BUT ALL LETTERS/CARDS WAS RETURNED THEN I GAVE UP LOVE YOU SEE YA IN HEAVEN SORRY FOR THE LOSS
marilyn hetrick
January 23, 2010
Carol, I am so sorry for your loss. Larry was such a dear person to work with and I,ll miss seeing him at the WMCA and on the roads in Woodville.

Love to all the family Gail Gilman
January 16, 2010
Carol, Mitchell and the rest of your wonderful family, Mr. Walls always made me smile when I saw him. He was a wonderful neighbor, as are you and I am so sorry for your loss. I will always think of him and his sense of humor when I turn down the dirt road to my house. I always knew he was looking out for me and my daughter and that if Sasha or I needed anything we could ask Carol and Larry. love Laurie and Sasha Deterding
laurie deterding
January 6, 2010
My heart and prayers go out to the Walls family. While working with Larry he always knew how to make people laugh and was very much admired.
Jodi W
January 5, 2010
Michael, Matt and Mitchell:
Our thoughts are with you and your family. Let us know if you need anything.
Love you guys!
Jamie Peterson, Mom and Malcolm
January 5, 2010
I worked with Larry in the early 80's at DOT. When my daughter was gravely ill, Larry came by the hospital to visit each day. He placed my daughter’s name on the church prayer list. To which I'm truly grateful. Larry showed me what a Christian was and how they are suppose to live. Our prayers are with you and family in your time of sorrow.
Shirley, LaVonia & Brady Proctor, Jr.
January 5, 2010
Our thoughts and prayers are with you in your time of grief. May your memories bring you comfort.
Beth and Michael Parramore
January 5, 2010
Carol,

Our thoughts and prayers are with you and the family. May God's peace be with all of you.

Frank and Sherry Andrews
Tallahassee & Cheraw, SC
Frank Andrews
January 5, 2010
Carol and Larry were among the first families we met when we moved to Woodville from New York...a big change our family. They made us feel so welcome and have always been very caring friends of us and the community. We will miss Larry. Our love goes out to you Carol and to your family. Leslie,George,Carrie and Sherri
January 5, 2010
Carol, Billy, Bonnie & Family,

Dan and I are truly saddened to learn of Larry's death. He was a very special man with a heart of humility. He will be remembered with great honor and our sympathy and prayers are with your famiily.

Sincerely, Dan and Gail McCall
Tallahassee, FL
Dan & Gail McCall
January 4, 2010
I worked with Larry for quite some time at DOT. He was admired & liked by all who met him. He had such a zest for life! One thing for sure ... he loved his family! I am so saddened at his passing. My deepest sympathy to your family.
Ruth C
January 4, 2010
Carol, Billy, Bonnie, and family, My heart goes out to you at the loss of Larry. I have many fond memories of the years our childen were in high school. May God keep you all and give you His peace.
Norma Webb
January 4, 2010
I worked with Larry at FDOT and he was a pleasure to work with. He had the dubious task of making sure the road contractors kept their pre-qualified status. I can remember him telling them how to spell his last name..."just like the 4 walls". Whenever we gathered for office events that involved food, Larry always said a very meaningful blessing. He will be missed.
G Wheeler
January 4, 2010
Mrs Walls and Billy, I am so sorry to hear about Mr. Walls passing. He will always be remembered as a warm and caring man who would always have a smile on his face and always seemed glad to see you. I pray for your family and pray for your comfort during this time
Jim Moore
January 4, 2010
Larry will be truly missed. He was a wonderful person with a rock solid set of principles. He always knew the right thing to do and our community has suffered a major loss with his passing. Our prayers go out to the Walls family.
Carl
Carl Cocroft
January 4, 2010
We are saddened to hear of Larry's death. What a fine and gracious gentleman. We feel privileged to have known him. Our thoughts are with all of you. Glenda & Jim Conley
January 4, 2010
Ms. Carol,

I was very saddened to learn about Larry's passing. He was one of the best Supervisors I ever had working with D.O.T. He always watched out for me and was a true friend. He will be sorely missed. We all loved him alot. Just remember the good times and all the good memories of him. You and your family will be in my prayers and thoughts during this very difficult time.
Patricia (Pat) Bush
January 4, 2010
Working with Larry was a pure joy. It's been years since we've talked, but I'll always remember his zest for life and most pleasing personality. He will be missed.
Jim Robinson
January 4, 2010
Ms. Carol, Mitchell, Michael, and Michael,
We were sad to hear of the passing of your husband and granddad. We will pray for your family.
Rice Family
January 4, 2010
Billy and Bonnie, So very sorry for the loss of your father. Know you're in my thoughts and prayers during this difficult time.
Clyde Wiggins
January 4, 2010
Billy - I am very sad at the passing of your Dad. Please know that my prayers are with you and your family. The peace of the Lord be with you!
David L
January 4, 2010
Showing 1 - 24 of 24 results