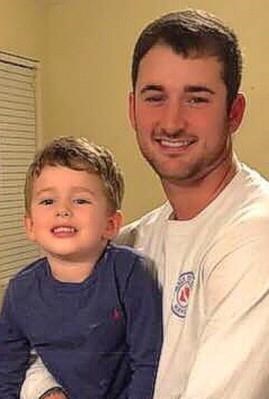 Although he received many awards throughout his military career, his greatest achievement was his son Jackson Alexander Carson. Whether in Hawaii, at softball games, or a duck blind you would find Jackson right by his side. Nick aspired to instill the same core values in his son that his dad instilled in him. His legacy will live on in Jackson.

Nick touched many lives and leaves behind many friends and battle buddies that will always feel his presence. He was survived by his parents Joe and Debi Morgan of Crawfordville, FL, wife Shelby Burris of Tallahassee, FL and his son Jackson Alexander Carson of Tallahassee, FL, his brother Justin Stephens of Huntingtown, MA (Lauren), sister Aimee Moon of Crawfordville, FL (Richard), brother Brandon Carson of Oahu, HI, sister Cynthia Carson and brother Chris Carson of Huntington, WV.

David Conn of Bevis Funeral Home, Harvey Young Chapel in Crawfordville, FL is assisting the family with arrangements. (850-926-3333 or www.bevisfh.com

Published by Tallahassee Democrat on May 2, 2018.
To plant trees in memory, please visit the Sympathy Store.
MEMORIAL EVENTS
May
3
Visitation
5:00p.m. - 8:00p.m.
Ivan Assembly of God Church
202 Ivan Church Road, Crawfordville, FL
May
4
Service
3:00p.m.
the Ivan Assembly of God Church
FL
Funeral services provided by:
Bevis Funeral Home of Crawfordville
MAKE A DONATION
MEMORIES & CONDOLENCES
Sponsored by Bevis Funeral Home of Crawfordville.
12 Entries
I am saddened to hear about the unexpected loss of your loved one. The sting of death brings grief that is difficult to bear. May prayers to the God of all comfort strengthen you. He promises, I have heard your prayer. I have seen your tears. I am healing you. (2 Kings 20:5)
May 21, 2018
Gone too soon but never forgotten. Our loving Creator keeps those who passed on, in his memory because they are precious to him. (Psalm 116:15)
AC
May 8, 2018
Joe Morgan and Family:

I only found out today about your loss of your son!
I am so sorry for such a terrible loss as this!
NO WORDS CAN BRING COMFORT UNLESS ITS THOSE SPOKEN BY GOD IN HIS WORD!
Let me share a poem with you I wrote for another who recently suffered a terrible unexpected loss.
I hope it will bring some comfort to you and your family.

Life is full of trouble and things beyond our control!
Life is a trial and a test of the soul!

I'm reminded of a young man at my local church as I write this rhyme!
He had gotten married, was blessed with three children and life was great and going fine!

One Sunday our Pastor called this couple to the front to honor them for their good deeds!
But just a few days later, life brought this poor husband to his knees!

His precious wife died from a stroke followed by complications unknown!
Now he has "three" young toddlers to raise all alone!

Lord, reach down from Heaven and gently hold this precious man up!
As he drinks from one of life's BITTER CUPS!

The reason we suffer in life goes back to Genesis and to Adam and Eve!
When the Serpent/Satan lied and deceived!

When life hits you hard and does you wrong!
"Lean on God" and He will give you a Victory Song!

Alexis was born on April 29, 1992
She passed away after complications following a stroke on April 12, 2018
She was a member of Generations Church in Tallahassee, Florida.
She was very active in women's and children's church ministries!

She was loved by all and will be greatly missed!
She fought a good fight, she finished the race, she kept the faith!
Alexis is walking with Jesus now on those Streets of Gold!
Lewis Edgar Thomas
May 6, 2018
PRAYER ARE WITH YOU'LL!
ELDER JOE COLSON, JR AND FAMILY
May 4, 2018
May the love of friends and family carry you through your grief.
Terry Ramsey
Friend
May 3, 2018
My thoughts and prayer's are with you all I pray for comfort and strength in the day's a head.
Mary McMahan
May 3, 2018
So sorry for your loss. May he rest easy in the heavens above. Prayers going out to your entire family!!
Kedrick Moore
May 3, 2018
Again, our deepest condolences to you and your family. We will continue to pray and keep all of you in our hearts in the days and weeks to come.
Ashley Feed
May 2, 2018
My deepest sympathy to you and your family. I pray for God to comfort you in this hour and days, months and years to come. May the glory of God rest upon you all.
MICHELLE ROSIER
May 2, 2018
MICHELLE ROSIER
May 2, 2018
So Sorry for your loss, just know that our family is praying for you. Much love Aunt Kathy and Uncle Tommy.
May 2, 2018
Grief can be so hard, but our special memories help us cope. Remembering you and your loved one today and always.
Devon
May 2, 2018
Showing 1 - 12 of 12 results