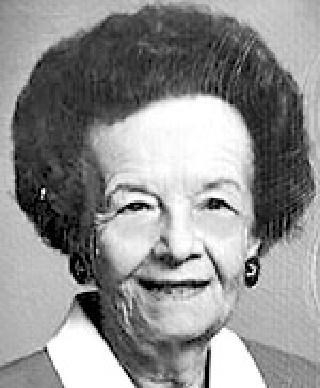 died September 30, 2018, at home. She was born in Hopewell, Florida, October 2, 1912. After graduating from Plant City High School, she married Fred D. Alley. They were married for over 50 years and had one daughter, Barbara Bowden (Hilman F. Bowden, deceased). Mr. Alley served in World War II while Mrs. Alley managed his office with Metropolitan Insurance Company. Later she worked for Hillsborough County Tag Agency during peak season. Most of her life was well spent looking after her home and family. She was a member of First Baptist Church of Plant City, the Lions Club Auxiliary and the Woman's Club. She enjoyed time with friends playing bridge. She is survived by her daughter, Barbara A. Bowden; and two grandsons, Hilman F. Bowden, Jr. (Pam), and Charlie A. Bowden (Leecy). She is also survived by five great-grandchildren, Katie Corby (Alex), Hilman Bowden III (Nina), Chelsea Barnett (Carson), Bailey and Lindsey Bowden; as well as two great-great-grandchildren, Brent and Beau Corby. She was nicknamed "Honey" by her husband and the name forever stayed with her through her grandchildren and friends.

Celebration of Life will be held Friday, October 5, 2018, at 11 am at Hopewell Funeral Home, 6005 S. County Road 39, Plant City 33567. Interment will follow at Oaklawn Cemetery in Plant City. In lieu of flowers, memorial contributions may be made to First Baptist Church of Plant City, 503 N. Palmer Street, Plant City 33563, or a charity of your choice. Expressions of condolence at www.HopewellFuneral.com.
Published by Tampa Bay Times on Oct. 3, 2018.
To plant trees in memory, please visit the Sympathy Store.
MEMORIAL EVENTS
To offer your sympathy during this difficult time, you can now have memorial trees planted in a National Forest in memory of your loved one.
Funeral services provided by:
Hopewell Funeral Home and Memorial Gardens - Plant City
MAKE A DONATION
Please consider a donation as requested by the family.
MEMORIES & CONDOLENCES
5 Entries
With deepest sympathy in the loss of your loved one. May you find comfort from God, the hearer of prayer. Psalm 145:17,18.
October 6, 2018
Our deepest sympathy to your dear family. She Blessed a lot of folks in her incredible lifetime. So sorry we cant attend but in our Georgia home. Our prayers and comfort during your grieving journey. Gid Bless you all.
Vonda and Ron Gainey
October 6, 2018
My sincerest condolences to the (Holloway) Alley Families in the loss of your loved one, Ledgie, and pray you find comfort in Psalms 91:2.
October 3, 2018
Our family would like to send our condolences to your family. We understand how hard it is to lose a loved one; we are sadly in your shoes also. But what we realized is that the Bible tells us to Throw your burden upon God himself, and he himself will sustain you. Never will he allow the righteous one to totter. We know that the one true God will always comfort and help us as well as your family. God will never disappoint his loyal servants. We will include your family in our prayers.
Anderson Family
October 3, 2018
Offering our deepest condolences during this difficult time.
The Staff of Hopewell Funeral Home & Cemetery
October 3, 2018
Showing 1 - 5 of 5 results