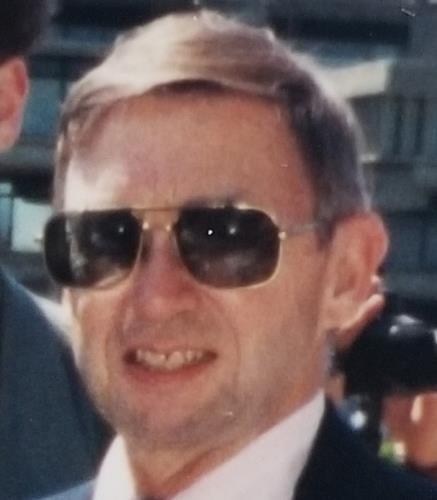 FUNERAL HOME
O'Keefe-Wade Funeral Home
70 Washington Street
Taunton, MA
James Robert Lincoln passed away at Brigham and Women's Hospital in Boston on July 18, 2020 after a short illness. His daughters were by his side. He was 87. He was the loving husband of Patricia, who predeceased him in January 2019. They were married in 1961. Born in North Dighton and raised in Taunton, James was the son of the late Charles H. and Esther F. (Sullivan) Lincoln. James was educated in Taunton Catholic schools. He graduated from Monsignor Coyle High School in 1951. He earned a Bachelors degree from Stonehill College in 1955. James later received a Masters Degree of Education, and subsequently a Master of Business Administration, from Bridgewater State College. James began his teaching career in the North Attleboro public school system before returning to his hometown of Taunton. He was the eighth grade teacher at Walker School prior to becoming the assistant principal of the Cohannet Middle School. He returned to Walker School as principal before accepting the position of principal of the Elizabeth Pole Elementary School in 1970, where he remained until his retirement in 1994. He was well liked and respected by his fellow teachers and administrators. He made a difference in generations of the children of Taunton throughout the years. As one student put it at his retirement, "you put the PAL back in principal". James began playing the trumpet in high school. This led to a side career of playing in his band, the Mel-Tones, for several years. He frequently played on the weekends at Roseland Ballroom, amongst other venues, such as the Indian Head Resort in NH. He spoke fondly of meeting his musical idols, Stan Kenton and Maynard Ferguson. James served his country honorably as an officer in the US Navy during the Korean War. He played trumpet in the US Navy band for 21 months. James was a very active member of the community until his recent illness, including being a part of the Human Services Department/Taunton Council of Aging. He enjoyed golf, traveling throughout Maine and Cape Cod and exploring Boston. He prided himself on working on his home and yard, which continued until recently. James maintained a strong interest in current events and sports, as well as history. He could trace his genealogy back to one of the early settlers of Taunton, Thomas Lincoln, in 1650. James was a member of the National Education Association and the Knights of Columbus. He met then Senator John F. Kennedy while at Coyle High School as he was the youngest member of the Knights of Columbus. He was a parishioner of St. Jude the Apostle. James is survived by his children, Nancy Whalen and her husband Michael of Pawtucket, RI, Jean Lincoln-Gauthier and her husband, David, of Stoughton, and Daniel J. Lincoln of Taunton. He was the grandfather of Matthew and the late Andrew B. Gauthier. Funeral home visiting hours will be held at the OKeefe-Wade Funeral Home, 70 Washington St., Taunton, MA 02780 on Thursday, July 23rd from 5-7pm. Funeral from the funeral home on Friday at 9am. followed by a Mass of Christian Burial at St. Jude the Apostle Church in Taunton at 10am. Burial will be in St. Josephs Cemetery in Taunton. Burial will be in St. Josephs Cemetery in Taunton. In lieu of flowers, donations in James' memory may be made to the Brigham and Women's Hospital Development Office, 116 Huntington Avenue, 3rd Floor, Boston, MA 02116. Contact: Kiran Rai at 617-424-4321 or [email protected] edu.
Published by Taunton Gazette on Jul. 21, 2020.
To plant trees in memory, please visit the Sympathy Store.
MEMORIAL EVENTS
Jul
23
Visitation
5:00p.m. - 7:00p.m.
O'Keefe-Wade Funeral Home
70 Washington Street, Taunton, MA
Jul
24
Funeral
9:00a.m.
O'Keefe-Wade Funeral Home
70 Washington Street, Taunton, MA
Jul
24
Mass of Christian Burial
10:00a.m.
St. Jude the Apostle Church
Taunton, MA
Funeral services provided by:
O'Keefe-Wade Funeral Home
MAKE A DONATION
MEMORIES & CONDOLENCES
5 Entries
Lots of fond memories of Jim and Pat with the O,Briens, especially at Taunton Tennis and Swim Club. Richard taught with Jim in the Taunton School System. Our deepest sympathy to the Lincoln children. Love, The Carters
Laura, Richard and Eric Carter
Friend
July 26, 2020
Mister Lincoln was my teacher at Walker school when I attended it. He loved teaching and was always willing to go the extra mile to help you. My condolences to his family.
Ozzie DeAndrade
Student
July 24, 2020
When I was in 5th grade at Walker School Mr. Lincoln called me down to the cafeteria for about 15 minutes. He had heard from my music teacher (Mr. Ed Spillane) that I played a mean trumpet for a 10 yr old! He asked me to play for him, and gave me some tips on playing. I will never forget that day! Much respect for a nice man.. RIP
Tina Mandell
Student
July 21, 2020
Rest In the sweetest peace, Jim. You were a good and decent man...a kind and loyal friend to my sister, Susan. May the Lord bless you richly.
Heartfelt sympathy to Nancy, Jean and Dan.
Margaret Aleixo
Friend
July 21, 2020
I knew him from Cohannet School. He was a respectful man He will be sorely missed r.i.p Mr. Lincoln
Linda Carvalho Burgo
Friend
July 21, 2020
Showing 1 - 5 of 5 results