STEWART WOODWARD
STEWART HUNT WOODWARD Stewart Hunt Woodward died unexpectedly November 15th in Cashiers, NC at the age of 66. He was born May 11, 1947 in Charlottesville, VA before moving with his family to Charlotte, NC where he grew up. He graduated from Emory University School of Business and obtained an MBA from University of Pennsylvania Wharton School of Finance. After graduation, he moved to Atlanta, GA where he worked for Arthur Anderson and Bear Stearns before starting his own consulting firm. In 1987, Stewart moved with his family to Vero Beach, FL. Stewart was a ham radio enthusiast since the age of ten - a hobby he pursued until his death. He was an avid pilot and a true lover of animals. He spent many a happy afternoon with his three dogs, Dexter, Molly and Cody and could often be found at the dog park in Vero Beach or walking his dogs through the mountains of North Carolina. He is survived by his wife of 43 years, Barbara Mackle Woodward and his two children - his daughter, Virginia Romano, son-in-law Robert and his two beloved granddaughters, Elisabeth and Christine, and by his son Scott Woodward, who is expecting a child with his wife Lauren next year. He is also survived by his mother Helen Woodward of Charlotte, NC and his sister Phyllis and brother Marshall. A gathering to celebrate Stewart's life will be held at Quail Valley Boat House on November 25th from 2 to 4 PM. In lieu of flowers, please send donations to the Humane Society of Vero Beach or Friends for Life Forever Farm in Sapphire, NC.

Published by TC Palm on Nov. 20, 2013.
To plant trees in memory, please visit the Sympathy Store.
MEMORIAL EVENTS
To offer your sympathy during this difficult time, you can now have memorial trees planted in a National Forest in memory of your loved one.
MAKE A DONATION
MEMORIES & CONDOLENCES
23 Entries
So, so sorry to hear of Stew's passing, He was a great mentor to me in the ham radio world. He will always be a legend in the Amateur Radio world, and very truly missed.
Cindy Weaver W4SKO
April 12, 2014
Barbara, although I knew Stew for only about three years, Stew quickly became one of my very best friends. I've mailed a note to you with all of my great memories. We had so many common interests and, and as I had all the questions, Stew, in his calm and patient manner, had all of the answers. His loss will certainly leave a void in the lives of everyone who had the great pleasure to know him.
Gay and I will forever share our memories of Stew's great sense of humor and quick wit. I will also miss the late night text exchanges when we informed one another when some rare DX ham station appeared on one of the ham bands. Please let us know if we can help out in any way here in Cashiers. Our thoughts and prayers are with you, Scott, Ginny, Cody, & Dexter. Love, Alan & Gay
Alan & Gay Woodall
November 27, 2013
Dearest Barbara:
I am in GA and unable to attend today's service but I am with you in spirit as you gather to celebrate Stewart's life. Harland loved telling "Stewart Stories" when returning from the hunt camp. Your special guy left an indelible impression on all who knew him. He will be missed. I am thinking of you today and wrapping my arms around you. God bless you Barbara.
Donna (Mrs. Harland) Adams
November 25, 2013
Hello Barbra, Not sure if our note registered. We want to be sure that you know we are thinking about you and want to hear from you. We are shocked about the sudden passing of Stewart. We remember the good times when you helped us with Wayne and Beth. Can you believe that they are 45 and 43 years old. Both have two children. Our heart breaks for you great loss. We send our love to you and your family. The Reids, Rubye and Wayne
Rubye and Wayne Reid
November 24, 2013
Dear Barbara, It has been a long, long time since we last saw you. We were saddened to learn about Stewart passing. What a Shock for all! Know you are in our thoughts and prayer and that we love you. Please contact us - it has been impossible to find your phone number or current address. Your family sounds wonderful. So hard to believe that Jenny and Scott are grown with their own family. I remember when Wayne and Beth were babies how you and Stewart would help us with them. Wonderful memories of you and Stewart. We remember how much we all loved Pete the dog. Our hearts are broken for you and your family. Our Love, Rubye, and Wayne
Rubye and Wayne Reid
November 24, 2013
Dear Barbara,
Ronnie and I send to you and your loved ones our heartfelt, sympathy in the sudden, unexpected, loss of Stewart.
We have happy memories of our visits with him. After Hurrincane Andrew, Stewart brought two generators to Miami and we were the happy recipients of one of them. His generosity lives on forever!
Love's last gift is a beautiful, memory and I know you have many cherished, tresaured, ones of him.
He will be sorely missed by all who knew and loved him. You, Jenny, Scott, your grandchildren and entire family will remain in our daily thoughts and prayers, during this very sad and difficult time. May God bless you abundantly!
Aurelia and Ronnie Corbitt
Dallas, Texas
Aurelia Corbitt
November 22, 2013
To the Woodward family: Our most sincere condolences on the sudden loss of your Patriarch and my friend Stewart. I am going to miss his genteel manner, his generous willingness to share of his experience, and most of all the knowing laughter we shared when discussing the issues of the day, despite our concerns.

Each time I see Blondie, our friend and companion of 12 years, my heart aches for your loss, but my pain is soon abated by good thoughts about all the smiles Stewart brought to the world, both human and canine. Your pain is truly heartfelt and we pray that the God of Love, source of the Peace that passeth all understanding, provides comfort to you all during this difficult time.
The Glenn Lassiter Family
November 22, 2013
Dear Barbara,
I am very sorry to hear of the passing of your husband . I hope you can find comfort in your family, and particularly in your grandchildren. This is certainly a very hard time in your life. You are in my thoughts.
Irina von Korff (Erickson, class of ´66)
November 22, 2013
Stewart Woodward was a new friend to Dick and me. We could tell how he loved the mountains and his dogs. He generously would stop by to pick up a neighbors' dog to accompany him and his tribe up the mountain. I thought what a thoughtful and kind man he is. We will miss him on our walks. We send our condolences to you, Barbara
Dick and Linda Dickinson
Linda Dickinson
November 21, 2013
Dear Barbara, We are thinking of you and your family and sharing in your loss. I always looked forward to running into Stu and the sweet pups on my early morning walks on the mountain. With deepest sympathy, Beth and Alan Runyan
November 21, 2013
We are so sorry to hear of Stewart's passing. He was such a joy to be around, so funny and kind. We are thinking of you Barbara, and your beautiful family.
Claire and Harry Howle
November 21, 2013
Thinking of your entire family. Linda and Don Proctor
November 21, 2013
Stewart was my Cashiers dog-walking buddy...Besides the dogs...he loved to talk about his family..his darling granddaughters and was so excited about the baby Scott and Lauren are having in a few months...
My deepest condolences...he will be missed by so many....
Shepard Hicks
November 21, 2013
May Stu rest in peace. Our blessings & prayers are with the Woodward family.
Bob & Barbara Helms
November 21, 2013
Our Deepest Sympathy to Barbara, Scott, Ginny and their families. We share in your heartache and loss of our very good and dear friend. He will be missed always. With our love and prayers. Keith & Kay Kite , Kyle & Kollin
November 21, 2013
Barbara, Scott, and Jenny, our thoughts are prayers are with you. Just want you to know we are thinking about you. Sarah is sorry she cannot be here, she is leaving for London today-Thursday the 21st. The Vatland Family
Karen & Bob Vatland
November 21, 2013
Stew has been my ham radio buddy for over 40 years. Talked to Stew daily on 7.158. Great conversation on this last Friday morning. I will miss him. Condolences to Barbara and family.
RIP & 73
SK
Steve
Steve McElroy- K4JPD
November 20, 2013
I serviced his house in Vero Beach for the past 8 years. He was always a pleasure to visit & I always enjoyed being greeted by Dexter, his dog. He will be missed. Lison Viamontes
Lison Viamontes
November 20, 2013
I only knew Stew through our shared hobby. He was greatly admired and respected. I'll miss hearing his callsign on the air.
Vaden McDonald NN4K
November 20, 2013
I met Stew in 1972 at a Ham radio meeting. He has always been a friend and someone I held in high esteem for his calm demeanor and high personal values. May he rest in peace.
Bob Allphin K4UEE
Bob Allphin K4UEE
November 20, 2013
Stu was a gentleman and swell to talk to with Dave, Bob, Rick, and all the others. We will miss his friendly voice.
Gramt Bright
November 20, 2013 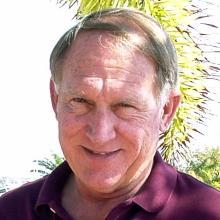 I knew Stew for forty years (through Ham Radio). A good man is gone.