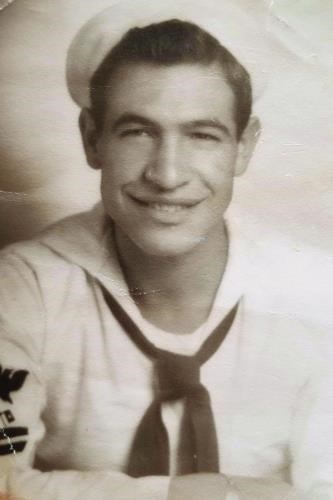 Eddie Brusco went home to be with his Lord and Savior on August 5, 2021. His life shall shine bright for all eternity in the chapters of world history books as he not only lived through some of the most historical world events; he also served his country proudly.

Eddie was born in Brikenfeld, Oregon to Arthur and Jennie Brusco in Sept. 14, 1923. He was raised in Longview, Washington and graduated from R.A. Long High School in 1942. A few months after graduation he enlisted in the U.S. Navy. Immediately after boot camp he left, destination- Pacific Theater World War II. Eddie was assigned to the USS Doyen, an attack transport that was best known for its participation in the U.S. invasion on Tarawa. While serving on the USS Doyen, Eddie witnessed one of the most iconic scenes of World War II. The raising of the American flag atop Mount Suribachi during The Battle of Iwo Jima on Feb. 23, 1945. After returning from the war, Eddie met the love of his life, Stella Schlecht, and they were married on July 17, 1946. They remained lifelong residents of Longview, Washington where they raised three children, Labonna, Ginger, and Mick. Eddie worked as a Longshoreman for Pacific Maritime Association for 39 years. Eddie enjoyed fishing, hunting and watching baseball games and the X-games.

Eddie is preceded in death by his parents, Arthur and Jennie; his brother, Francis; and a granddaughter; Shelly. Eddie is survived by his wife, Stella; his children and numerous grandchildren.

The family has already held services for Eddie at Longview Memorial Park.

Published by The Daily News on Sep. 3, 2021.
To plant trees in memory, please visit the Sympathy Store.
MEMORIAL EVENTS
To offer your sympathy during this difficult time, you can now have memorial trees planted in a National Forest in memory of your loved one.
MAKE A DONATION
MEMORIES & CONDOLENCES
3 Entries
He was a wonderful man and will missed. Dad's duck hunting buddy for so many years.
Kathy Dixon
September 4, 2021
So sorry to hear this!!! He was my dads duck hunting buddy!! Gary and I both loved him dearly. We will be praying for all of the family.
Gary and Naren lindberg
September 3, 2021
He was a blessed man. Always had a smile. He will be missed. Take care you guys. Love to your mom.
Jim Holde
September 3, 2021
Showing 1 - 3 of 3 results