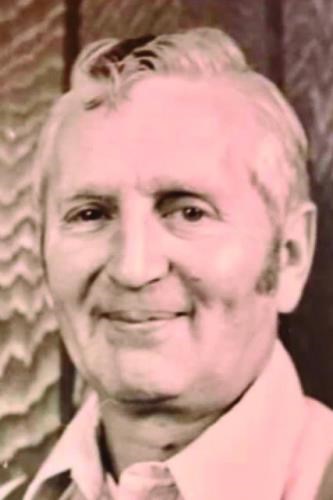 Elwin was born in Ponca, Nebraska on the kitchen table and named after the doctor who brought him into the world. He left school at an early age as a teenager to help out on the family farm.

When he was seventeen, his mother signed papers so he could join the Navy. After joining on his seventeenth birthday, he traveled the world on the USS Tuscaloosa and bragged that he spent his eighteenth birthday in China and had the tattoos to prove it. He earned his GED in the Navy.

Shortly after leaving the Navy, he met the love of his life Wilma. He proposed on Valentine's Day. Two months after they met, they were married. Their love affair is one for the books. They were married seventy years on March 2, 2021.

Two years after the wedding, they had a beautiful little girl they named Jo Ellen. Shortly thereafter, he and Wilma moved to California and had two more children, Randi Sue and Jeffrey Lynn. He started work doing clean up in a plywood mill in Northern California. His intelligence and hard work soon earned him a foreman position. Eventually they worked their way up the coast to Southwest Washington where he was quickly promoted to the superintendent of over 600 workers at the Pope and Talbot Mill in Kalama, Washington. When he did the rounds in the morning, his workers said his walk was a near jog. This jog was noted throughout his life everywhere from the mill to the casino.

During this time, he volunteered a great deal within the community, serving as the president of the Kalama Fair, assisting in the high school shop, and mentoring troubled youth by showing them the imperativeness of finding an occupation and directing them toward that goal. Also, while being the superintendent at Pope and Talbot, he got an idea in his head and turned it into a reality by spearheading the patents for panel 44 and cedar strip plywood which became a bestseller, his greatest personal accomplishment over that portion of his career. He and Wilma were very excited years later when they went to Italy and saw his patented plywood in an establishment. As to those of us who had the pleasure of observing his achievements, however, his former boss put it well, stating that he will always remember Elwin's ability to draw people together. This would carry on as a hallmark of his life.

After Pope and Talbot, he took on new challenges as a manager of veneer and architectural panels at Weyerhaeuser in Longview. These duties included work on architectural panels in Indianapolis, Indiana (where he and Wilma got in the pits at the race track), and overseas veneer marketing in Japan.

Elwin also built his own home on the Kalama River. He made it into a farm, raising chickens, ducks, and hogs, as well as a pigeon with a broken wing that became the family pet. The beauty of the farm on a quarter-mile of the picturesque Kalama River gave it the name of Cloud Nine. In 1973 while building the home, Elwin exchanged gunfire with a burglar who had been robbing cabins on the river. He shot the man in the leg, shooting a hole through his own stolen hip boots. Only then did the sheriff catch the thief and his accomplice.

Elwin was known as "The Mayor of the Kalama River", a title lovingly given to him by his neighbors. The plaque on the main street of Kalama is dedicated to him and describes his constant care for anyone in need. If you needed to know how to do a job, use a tool, or just a straight-up shot of moonshine, he was your guy.

He was an avid outdoorsman. He trapped on the Missouri, shot a moose on a hunting expedition in British Columbia, and was known for catching his limit of fish before Wilma could make him breakfast. His granddaughter lovingly remembers going to church with Wilma when he was in his early eighties and being waved down by him on the way. He excitedly showed them a bobcat he had trapped. When the granddaughter inquired about the scratch on his leg, he gave her that signature mischievous smile and said, "I got a little close; he didn't like it."

In addition to hunting and trapping, Elwin loved gardening, a hobby he would carry throughout his life. He had a library of gardening books. He was a self-taught Master Gardener and beekeeper. He would make sure the neighbors, as well as anybody who came to his home, had more than enough vegetables and flowers when they left.

Elwin was known for his quick wit, sense of humor, and unmatched energy. Hard work was not hard work at all for Elwin because he enjoyed staying busy. Most of all, Elwin enjoyed taking charge of things, whether it was a hunting trip, supervising at work, or lastly at the rest home.

Most of all though, he leaves an infallible legacy; a life lived out as an example that with determination, passion, and hard work, success is possible in spite of nearly any obstacle.

Published by The Daily News on Apr. 7, 2021.
To plant trees in memory, please visit the Sympathy Store.
MEMORIAL EVENTS
To offer your sympathy during this difficult time, you can now have memorial trees planted in a National Forest in memory of your loved one.
MAKE A DONATION
MEMORIES & CONDOLENCES
5 Entries
Only knowing Elwin a short time thru his son Jeff Elwin loved showing me his cabin up the road from Jeff and of course showing off his booze making operation and a stop to feed the deer with apples. He had numerous stories that I will always cherish and his love for Kalama area was in questionable. A true pleasure meeting him
Mike Hogg
April 8, 2021
One of the most creative persons .. I remember sharing his happy thoughts all the time. It was a joy to know him and work with him.
Pamo Bhatia
April 8, 2021
Jeff and family so sorry about your loss. Your Father sounded like quite the man, what an interesting life he lived. Jeff, you really resemble your Dad in looks and your work and love of the land.
Shannon Hail
April 7, 2021
My dad Jeff worked for Elwin at Weyerhaeuser for a number of years and I have fond memories as a kid spending time at their house on the Kalamazoo and as an adult camping and fishing there. There was no shortage of firewood to be had as Elwin had been up since probably 4am chopping it. He was truly one of a kind and my memories of him are very much cherished. My thoughts and prayers to Wilma and family. With love, The Thomas familt
Justin Thomas
April 7, 2021
What an amazing man. I feel feel fortunate to have known him just a little. The loss is felt by many on the River.
Laurie Roth
April 7, 2021
Showing 1 - 5 of 5 results