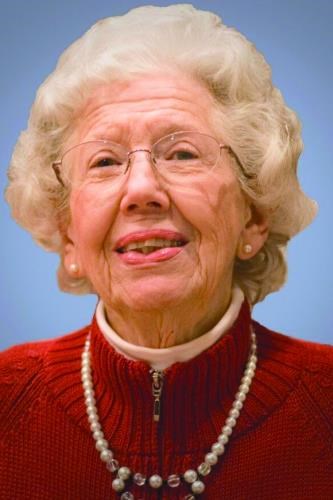 LaVonne was born on a farm in southwestern Iowa to William A. and Mary Ethel L. Sander née Chambers. The family, including older brothers Rex and Merle, LaVonne, younger sister Marilyn and youngest brother John "Stan", moved to Portland, Oregon in January 1943. She was an employee of Hyster Company. Following her marriage to Jack A. Trent in 1946, LaVonne moved to Longview, Washington and was a full time homemaker and mother.

In the the mid-1960s she reentered the workforce as a secretary in the Guidance office at RA Long High School, working there until her retirement in the early 1980s. LaVonne moved to Kirkland in 2011 to be near family. LaVonne was preceded in death by Jack in 1996, also preceded in death by her mother, father, brothers and sister. LaVonne is survived by her two children, William "Bill" Trent (Linda) of Beaverton, OR and Beverly Martin (Richard) of Kirkland, WA. Also surviving LaVonne are four grandchildren: Michael (Robin) Trent, Virginia Trent, Blake (Yvette Lessard) Bedell, and Owen Bedell; and three great-granddaughters: Jilyan and Kelsie Trent and Lilia Bedell; one sister-in-law, Rebecca Sander and numerous nieces and nephews.

LaVonne and Jack hosted several foreign students in their home: Preecha Saeu from Thailand (1970-71), and brother and sister Aziz and Habiba Sadat from Afghanistan (mid 1970s). Aziz and Habiba remained in the US and eventually became US citizens. They are still much-loved members of LaVonne's family. LaVonne was an active member in the Community of Christ Church where she taught Sunday school, played the piano and organ for services and in 2000 was ordained a deacon. She loved gardening and often shared her beautiful flowers with friends, family and her church. She also loved visiting with friends and family, sewing and homemaking, traveling with the Senior Travel Group of Longview and volunteering at St. Johns/PeaceHealth Hospital.

LaVonne will be remembered as a joyful, caring and loving Christian wife, mother, grandmother and friend to many. Her Christian faith was the foundation of her life. She will be missed. See NeptuneSociety.com for complete Obituary.

Published by The Daily News on Sep. 14, 2021.
To plant trees in memory, please visit the Sympathy Store.
MEMORIAL EVENTS
To offer your sympathy during this difficult time, you can now have memorial trees planted in a National Forest in memory of your loved one.
MAKE A DONATION
MEMORIES & CONDOLENCES
1 Entry
I so loved Lavonne. She was such a wonderful friend and mentor for me. She was always there at church..to encourage me in my piano playing, teaching Sunday school and just as a example of loving support. She had the best smile. Her whole face would glow. I will miss her!! Enjoy heaven dear Lavonne!! Until we meet again.
Becky Elhardt
Friend
September 14, 2021
Showing 1 - 1 of 1 results