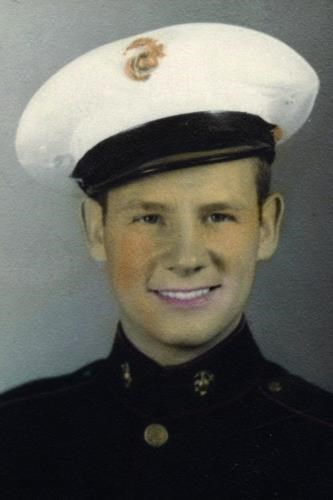 He was born at the family farm home on November 6, 1923 in Slope County, North Dakota to Henry and Emma Steyer. He was the sixth child and had nine brothers and sisters. During his formative years, he worked on the home farm as well as farms of his cousins. Leaving North Dakota, he traveled and worked in many areas around the United States. Norman enlisted in the Marines and fought with the Fourth Battalion during WWll on the Marshall Islands, Tinian, Saipan and watched as the US flag was raised at Iwo Jima. He was an Iwo Jima survivor. After leaving the Marines at the end of WWII, he worked for Boeing in Seattle and then moved to Kelso where he met and married Betty Jane Waite on August 28, 1947 at her home in Kelso. They were blessed with two daughters Karen (Steyer) Schultz of Olympia, Wash., and Diane (Steyer) Held of Calhan, Colo. Norman worked for Weyerhaeuser in Longview for 39 years retiring in March 1986. After retiring he and Betty traveled the United States. He was a 66-year member of Kelso Christian Assembly.

He dedicated many years to a mission in North Kelso and for 20 years he coordinated the jail ministry at the Cowlitz County jail. He also dedicated his Saturday mornings to going house to house inviting people to church. No one was a stranger to Norman.

He was preceded in death by his wife, Betty, his parents and eight of his brothers and sisters.

A celebration of his life will be held when we can gather again. In lieu of flowers, memorial donations can be made to Kelso Christian Assembly Benevolent fund in his name. The family would like to thank Delaware Plaza Assisted Living, Canterbury Gardens Memory Care and Community Home Health & Hospice for the wonderful care they provided our father in the last few months. Columbia Funeral Services is in charge of arrangements.

To plant trees in memory, please visit our Sympathy Store.
Published by The Daily News on Nov. 8, 2020.
MEMORIAL EVENTS
No memorial events are currently scheduled.
To offer your sympathy during this difficult time, you can now have memorial trees planted in a National Forest in memory of your loved one.
GUEST BOOK
6 Entries
I have heard so much about this wonderful man and his life from your family here in North Dakota. The stories of his life and faith in Christ has deeply impacted me. May you experience the Father´s love and grace today and always
Carolyn Baker
November 15, 2020
I will always remember my Uncle Norman as man dedicated to his Lord and his church. In his later years, I enjoyed hearing him tell about his WW II experiences. How appropriate that his passing was near Veterans Day! Heaven has welcomed a true warrior who served God and country with honor and humility. May the Lord bless his memory and his family.
Lavonne Larson
November 15, 2020
Norman will be remember for years to come for the many lives he touched. His love and passion for leading people to the Lord was inspiring to see.
Beverly Ramey
November 15, 2020
Norm was a welcoming face, a firm handshake, and sometimes a piece of candy that we looked forward to greeting at each church service. We'll always remember him fondly.
Raymond and Melody Kessler
November 11, 2020
Karen and Diane, my thoughts and prayers are with you and your family. I can hear dad say "welcome to the house".
Cindy Taylor Glenn
November 8, 2020
Norman was a wonderful man. Through his work in the jail he helped bring a number of inmates to find Jesus and change their life for the better.
Dan Price former jail superintendent
November 8, 2020