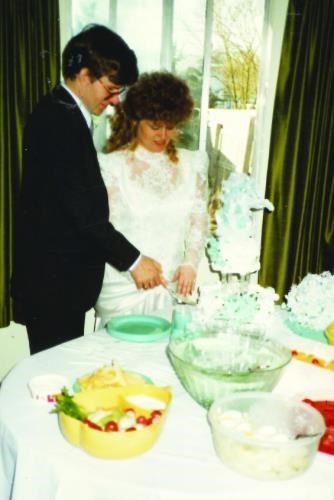 Pamela was born in St. Paul, MN. to Nicholas & Colleen Lasovich. Growing up in Minnesota, Pam attended Emanuel Lutheran School and graduated in 1969. She then attended Humboldt High School & graduated in 1973 both in St. Paul, MN. She got married to Harold Reynolds in 1975, and had her first son, Derek. They divorced in1981. For the next 8 year's she raised her son Derek on her own, with the help of her family & dear friend, Terrie. Terrie & Rick both worked at Safeway in Clatskanie & Terrie got Rick to call Pam, they met over AT&T, after numerous phone calls and few trips to WA. & MN. they decided to move her and Derek to Longview. And were married on March 17, 1991 and later their son Erik was born. They have lived in Longview for the past 30 years. Prior to moving to Longview, Pam worked at Ramsey County Hospital in St Paul, MN. as a unit secretary. In Longview Pam worked at Safeway in the deli. She worked for Another Option and with Americorps, working with the people with disabilities and as a teachers aid at Three Rivers Christian School.

She was a member of the Sons of Norway, where she served as the youth director and organized several of the lodges entries in various local area parades, winning numerous awards. She loved sports. Even though she loved the Seahawks, she will always be a diehard Minnesota Vikings fan.

Pam was a loving and devoted wife, mother and grandmother.

She was preceded in by death by her father, Nicholas, her mother and stepfather, Colleen and Al Toepper, & her brother, Donald and several aunts and uncles all of Minnesota. Pam is survived by her husband Rick, her son Erik both of Longview, her son and daughter in law, Derek and Katie, her granddaughter's, Haley and Kaci, all of Cottage Grove, MN. Her brother and sister in law, Nicholas & Mary Lasovich of W. St. Paul, MN., her nephews, Nicholas and Aaron of Minneapolis. Her aunt, Kathleen Oclyne of Stewartsville, MN., cousins Kathlyn Harris, Sherry Harris, both of Red Wing, MN., Richard Schwartz of MN. Andrew Nordmoe of St. Paul MN. And her dear friend Terrie Nuebauer of Clatskanie, OR. and numerous aunts, uncles, cousins, nieces, nephews and in-laws.

A special thanks go out to Hospice for their caring and support. Please make contribution's to Hospice or the American Heart Association. Cremation has taken place and a service to be decided at a later date.

Published by The Daily News on Sep. 8, 2021.
To plant trees in memory, please visit the Sympathy Store.
MEMORIAL EVENTS
To offer your sympathy during this difficult time, you can now have memorial trees planted in a National Forest in memory of your loved one.
MAKE A DONATION
Please consider a donation as requested by the family.
MEMORIES & CONDOLENCES
1 Entry
May your memories of the wonderful times you shared with your loved one comfort you and your family, today and always.
American Heart Association
September 8, 2021
Showing 1 - 1 of 1 results