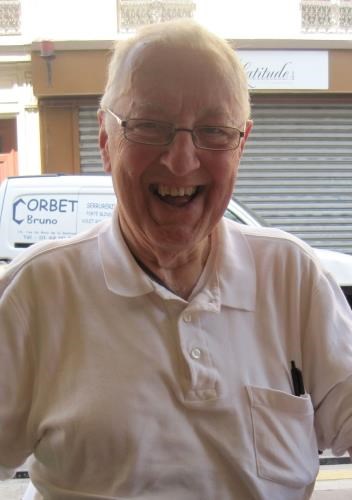 Robert Raymond Altenhof died May 3, 2020 at Canterbury Inn in Longview. He was 87 years old. Although a memorial service will be announced and held when it is safe to hold large gatherings, we wanted to share his obituary now in thanksgiving for his long life well-lived.

He was born in Donora, Pennsylvania on March 2, 1933, the only child of Margaret and John Raymond Altenhof. He graduated from Donora High School in 1950.

After moving to Longview and passing the Washington State Bar Association examination, he worked for Borders and Altenhof, then was appointed a Cowlitz County District Court Judge in 1980, from which he retired in 2000. Bob received his 50-year Washington State Bar Association pin in 2017, and was honored with a ceremony in the summer of 2019 for his (and Barrie's) long service to the Longview Library Foundation.

Bob also served (sometimes for decades) on several other boards of directors in the community, including the Columbia Theatre, Longview YMCA, Cowlitz County Historical Museum, Old West Side Neighborhood Association, and Applied Industries. He and his wife Barrie were founding members of the Lower Columbia Deep Thought Society (Deep Thought), which was formed as a study club, and became a close-knit group that still continues today. A "newcomer" to Longview in 1966, Bob was brought into Barrie's family, which gathered often for cocktail parties, lunches, dinners and picnics. Bob was an avid sports fan, from attending his daughters' swim, track and cross country meets and soccer, volleyball and basketball games, to rooting for the Huskies, Seahawks, Mariners and all of the Pittsburgh teams. More recently, he and his family became fans of the Tour de France. He was also well-known in the family for Sunday morning waffles, and especially when his girls were in high school, being their breakfast and lunch cook, as well as their alarm clocks in the mornings, including early-morning vocal ensembles. Speaking of the arts, Bob and Barrie went to dozens of plays and musicals together, and were avid patrons of the arts.

He and Barrie celebrated 54 years of marriage together, and both were polio survivors. Bob spent one of his high school years at the D.T. Watson Home for Crippled Children in Sewickley, Pennsylvania.

He is survived by his children, Ellie Slabodnik (Robert) of Sedro-Woolley; Kate Altenhof-Long (Cameron) of Vancouver; his nieces Anna Waters (Jerry) of Portland; and Roz Thompson (Jon) of Olympia, and his nephew Bill Clarke II (Heather), also of Olympia.

Also surviving are his grandchildren: Zoe Slabodnik and Erin, Maggie and James Altenhof-Long. His great-nieces and nephews are Edna and Riley Waters, Owen and Drew Thompson, and Grace and Lucy Clarke.

Bob was preceded in death by his parents, John Raymond and Margaret Altenhof, his wife Barrie Altenhof, as well as his parents-in-law Bill and Edna Clarke, his daughter Molly Altenhof, and his cousin-in-law Katy (Doug) Kjallin.

To plant trees in memory, please visit our Sympathy Store.
Published by The Daily News on Dec. 1, 2020.
MEMORIAL EVENTS
No memorial events are currently scheduled.
To offer your sympathy during this difficult time, you can now have memorial trees planted in a National Forest in memory of your loved one.
GUEST BOOK
2 Entries
So many memories of this generous and brave soul, but on a conversational footnote, he and I would compare our experiences of growing up to mill towns and his pride in Donora High which featured, besides Bob of course, alums Stan Musial, who played baseball with Ken Griffey´s grandfather, and later featured Junior´s dad, Ken.
Sam Wardle
December 2, 2020
A lot of good memories and such a legacy!
Gary Nyberg
December 1, 2020