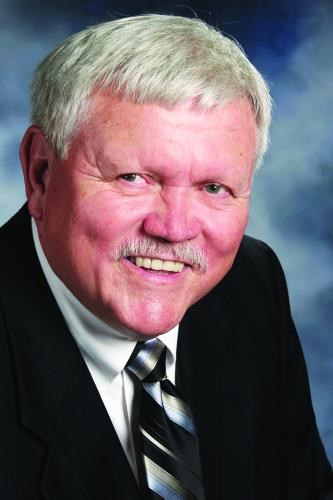 Our much loved husband, father and grandfather passed away peacefully in his sleep Thursday, July 15, 2021, knowing he would wake up in the arms of his Heavenly Father. Roger loved Jesus, his family and friends and this community where he lived for the past 59 years.

Roger was born in Denver, CO at the height of World War II. Like so many in that generation, he never knew his father and felt that loss his entire life. An only child, Roger was greatly influenced by his Nebraska grandparents and lived with them through most of his elementary school years. Eventually he moved to Los Angeles, CA with his mother and completed school there. He was drawn to a local teen hang out, " the malt shop". Part of the attraction was a certain red head who worked there! More on that later……

Always up for an adventure, Roger and 2 of his friends decided to take off for the Superstition Mountains and find the Lost Dutchman's mine! They prepared carefully for the trip and went out for one last evening on the town . They had a contest to see who could make the best time at the highest speed around a hairpin curve in Pasadena. The result was the front page of the local paper and Roger's right leg being 2 inches shorter than his left! Fast forward about 18 months to 1961 and you'll be at the wedding of Roger and the red-headed Judy! He always liked to say that he was in a cast and couldn't run fast enough.

Healed up and looking for adventure the decision was made to pack up and move to the Northwest; Longview, WA to be exact. Right, adventurous Longview! But for Roger it was just right, he really loved this community! In the almost 60 years here he grew up, found his voice and a life that suited him perfectly. Hunting, fishing, golf, good friends, a church family and the challenge of owning a business and making it grow! He and Judy raised two incredible kids: James (Staci) Allen and Latrisha (Brett) Allehoff. They in turn have raised four more incredible kids: Grandchildren, Rachel Phillips, Eric Phillips, Isaac Allen and Emily (Josh) De Boer. 3 weeks ago we were at our granddaughter's wedding with the entire family around! It was perfect and Roger felt so blessed. Such a wonderful memory for the entire family!

A celebration of Roger's life will be held at Longview Community Church on July 28, 2021 at 2 pm.

Published by The Daily News on Jul. 23, 2021.
To plant trees in memory, please visit the Sympathy Store.
MEMORIAL EVENTS
Jul
28
Celebration of Life
2:00p.m.
Longview Community Church
WA
MAKE A DONATION
MEMORIES & CONDOLENCES
4 Entries
I was inspired by Roger, a very good man a a great leader....Rest in Peace my Friend
David Roewe
July 30, 2021
So sorry for your loss Judy...
Gwynn Krey
Friend
July 29, 2021
In addition to Roger's years of community leadership he and Judy made time for leadership with teenagers in the Longview Community Church Youth Program during the early 1970's. With his ready smile, quick wit and infectious laugh he influenced hundreds of kids during dozens of weekend retreats around the Pacific Northwest. Kids loved him. In return, his influence and leadership during those years will not be forgotten. Thanks Rog.
Pat Lambert
July 27, 2021
Roger will be greatly missed here....but oh, what a party he is having with Jesus and those from Longview, like my Dad, who have gone before him. I bet he has gathered the Longview noon Rotary gang together up there! I have been blessed to have known Roger since high school in the 70's and the entire clan. Know my prayers and love come with this to you all. Love, Brent
Brent Bishop
Friend
July 24, 2021
Showing 1 - 4 of 4 results