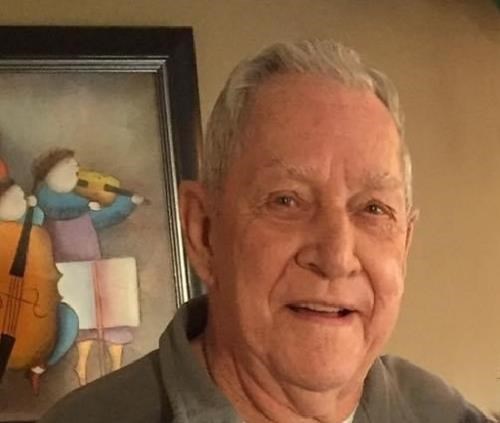 Bernard, also known as "Butch" was born in Uxbridge on April 18, 1935 he was one of fourteen children to the late Edmund and Lucille (Poulin) Saucier. 'Frenchy' (as he was known to many given his French heritage), later met Shrewsbury Street native Anna Mazzamurro while at a dance at the former P & A Club in Millbury. They married on June 2, 1962 in Our Lady of Mt. Carmel - St. Ann Church and Butch was immediately adopted into a large and loving Italian family.

Butch was an extremely hard worker and was able to overcome polio at a young age which left him with a slight limp. He never complained of his ailments, and ended up working as a supervisor for over forty years at Kennedy Die Casting in Worcester. He then worked for ten years for the Massachusetts Turnpike as a toll collector in which he often carefully adorned his New York Giants sweatshirt while in the booth, against the advice of his sons Peter and Paul, as he greeted travelers to and from his various assigned exits.

Butch cherished the friendships he made at the East Side Improvement Club on Shrewsbury Street where he was considered an adopted Italian. He would often meet and join his brothers-in-law and friends for a Miller Lite, and more than often, a spread of well prepared foods by its members. In later years, he was content with his iPad to surf the internet, keep tabs on people via Facebook and play solitaire. He was happily Anna's personal driver on the myriad of errands she needed to complete. Throughout his years, Butch remained humble and proud of the accomplishments of his children and grandchildren. The one constant throughout Butch Saucier's eighty-five years was family…and what a blessing!

In addition to his wife of 58 years, Anna, he leaves their children, Lisa A. Rosenkrantz of Shrewsbury, Peter L. Saucier and his wife Lisa, and Paul B. Saucier and his wife Lana, all of Worcester; his grandchildren, Kelsey, Ryan, Alana and Paul Saucier, and Anna and Lauren Rosenkrantz; his siblings, Patricia Rousselle and Deborah McMahon, both of Rhode Island, John Saucier of Whitinsville, Gary Saucier of Worcester and Jean Ethier of Uxbridge; his sister-in-law, Leona (Dattis) Mazzamurro of Worcester; also survived by many nieces & nephews and their families.

Out of an abundance of love and caution for family and friends, services for Butch will be private.

Please omit flowers. Honor Butch's memory with a contribution to a charity of your choice.

Arrangements by James & John Heald of The Joyce Funeral Home

To plant trees in memory, please visit our Sympathy Store.
Published by Worcester Telegram & Gazette from Nov. 22 to Nov. 24, 2020.
MEMORIAL EVENTS
Nov
25
Service
11:00a.m.
Funeral services provided by:
Joyce Funeral Home
GUEST BOOK
22 Entries
My deepest condolences to the Saucier Family. I am so sorry to hear about the passing of Uncle Butch. May you be comforted by the happy memories you had with him. Love to You All. xo RIP Uncle Butch
Ellie Rousselle-Morrissey
Family
November 25, 2020
Auntie Ann and Family
We are very saddened to hear of the passing of Uncle Butch may he rest in peace. All of you have our heartfelt condolences and love and may your many memories comfort you in this time of great sorrow.

Love
The Lemieux and Brown Family
Cindy Lemieux
Family
November 25, 2020
To Peter,Paul and the Saucier Family
Very sorry to hear of your Dad’s passing,May he Rest In Peace
Jimmy Cozzolino
Friend
November 24, 2020
To Ann, Lisa, Peter and Paul- Mom and I are so sorry to hear of Butch's passing. So many memories are flooding in. I am so happy to have seen you both in recent years at Coco's. We will pray for all of you and we hope you find comfort in your cherished memories of Butch.
Love, Donna Raposo and Anita Wojnarowicz
Donna Raposo
Neighbor
November 24, 2020
Peter, Lisa Kelsey, Ryan, and the Saucier family, our deepest condolences on the loss of your dad, husband, and grandfather. Please know you are in our thoughts and prayers!
The Pezzanos
Family Friend
November 24, 2020
Lisa, Peter and Paul so sad to here of your Dad’s passing. I remember spending time with Butch and your mom at ball games while you were growing up, those are wonderful memories. I will remember him in my prayers. Mr. D
Sal Degon
Friend
November 24, 2020
Peter, Paul & Lisa-
So sorry for your loss. I remember your dad was a such a kind man who was always friendly and happy. You are in our thoughts and prayers during this difficult time.
Paul Spaziante & Teresa Benoit
Friend
November 24, 2020
Peter,

I'm so sorry for your loss. Sending Love to you, LIsa, Kelsy and Ryan. May he Rest In Peace.

Sandy
Sandy Robichaud
Family
November 24, 2020
My heart goes out to all of you. Butch was a great guy and a gentle soul. Always smiling, always cheerful. May you rest in peace always and forever. May your memories of him be a blessing and comfort.
Michael P. Sacco
Friend
November 24, 2020
Our deepest sympathy on the loss of your husband , father and grandfather. Butch was a wonderful gentleman whom will be sorely missed by all who had the pleasure of knowing him. Godspeed Butch ! ❤
George Palermo
Friend
November 23, 2020
Deeply sorry for the loss of your husband, father, grandfather, he was a good man and I shall treasure memories of him and Anna. My prayers to u all.
Marie Ingoglia
November 23, 2020
Deeply sorry for the loss of your husband, father, grandfather,,,
Marie Ingoglia
November 23, 2020
May your hearts soon be filled with wonderful memories of joyful times together as you celebrate a life well lived. May God bless you and your family.
Vanessa Valery
Friend
November 23, 2020
Dear Anna & Family. I am so very sorry to hear of your loss. My thoughts and prayers are with you in your time of sorrow. May he R.I.P
Cathy Cyr
Family
November 23, 2020
Anna & family;

My heart felt condolences to you. Butch was a wonderful guy who was always a joy to be around. He always added love & laughter to the family gatherings. He will be truly missed now joining some incredible family who went before him.

Much love,
Bonny
Bonny Dattis
Family Friend
November 23, 2020
Mrs. Sauce, Lisa, Paul, Peter and grandchildren,
We are so very sorry of Mr. Sauces passing. He was such a great guy. May he rest in peace. God Bless you all! Cherish the great memories you all have forever.
Joe & Karen Germain
Friend
November 23, 2020
Anna and family; I am heartbroken to hear this sad news! Butch was a wonderful man. Denis and I always enjoyed getting together with you both especially around Christmas time! Rest In Peace Butch and my deepest sympathy to you Anna and family. A great man, a great family!! Love Jo-Ann and Denis In Heaven ❤
Jo-Ann M. Damore
Friend
November 23, 2020
I have the fondest memories of Butch. He was a great man that cherished is wife, children and grandchildren. He was full of warmth and friendship and you always felt that when you were in is company. My deepest sympathies to the Saucier family.
David Degon
Friend
November 23, 2020
So sorry to hear of the passing of your Dad.. He was a great man, husband and father !!!

It is definitely a huge loss to the world.


Ed Martin and family. HN. “85”
Ed Martin
Friend
November 23, 2020
Anne, know that you and your family are in our thoughts and prayers. My mom and dad loved you both, and mom counted you among her few, close friends. Butch was always good to me, and even through the teasing, I knew that there was an abundance of caring.
Peace to you, and even at this holiday time, be sure to let the good memories offer you and the kids deep condolence.
Rob and Kathy Dwyer
Robert Dwyer
Friend
November 23, 2020
Aunt Ann,
So sorry to hear sbout Uncle Butch. He was a very special man. We loved him very much. Prayers are being sent your way.
Love to you, Lisa, Peter & Paul.
Michael & Debby Bernier