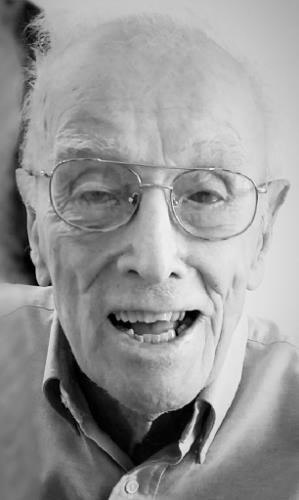 SHREWSBURY - Edward F. Daly of Shrewsbury, formerly of Mashpee, passed away peacefully on August 25th 2021 at the age of 100.

Ed was born in Worcester, son of William and Mary (Murphy) Daly. He was predeceased by his brothers William, Charles and Joseph. Ed leaves behind several nieces and nephews.

Ed was a graduate of South High School class of 1938 and the College of the Holy Cross, class of 1942, both in Worcester. He enlisted in the United States Army in August of 1942 where he was recruited by the Office of Strategic Services (O.S.S.), the predecessor of the Central Intelligence Agency. Ed was assigned to Kunming, China where his unit earned the Presidential Unit Citation. After World War II ended, his unit was among the first soldiers to be assigned to Shanghai, China as a communications unit.

Following the war, Ed enrolled in Boston College Law School, graduating in 1949. Having passed the bar exam, he joined the Federal Bureau of Investigation where he served in Michigan and in Washington, D.C. He later took a position in the Labor Department where he was appointed Assistant Director in charge of the enforcement of the Employee Retirement Security Act of 1974. After retiring from the federal government in 1980, Ed moved to Cape Cod. In 2018, Ed was deeply honored to be awarded the Congressional Gold Medal for his service to the O.S.S. during World War II.

He was a member of the Knights of Columbus Alhambra Council, Special Agents of the F.B.I., the O.S.S. Society, and the Holy Cross Alumni Association. He was a former president of the New Seabury Men's Club, the President's Council at Holy Cross, and an active member of Christ the King Parish in Mashpee. Most recently, Ed was a resident of Southgate at Shrewsbury, where he was extremely grateful for the outstanding care provided by their staff. The family is especially grateful to the aides and nurses of Hampton Suites who brightened every day for Ed. The family also wishes to thank UMass Geriatrics Dr. Erika Zimmons and her team, as well as Dr. Lara Kovell and Notre Dame Hospice.

A funeral Mass will be held on Friday, August 27, at 11 a.m. in Christ the King Church, 1052 Pleasant St., Worcester. There are no calling hours. Burial at the Massachusetts National Cemetery in Bourne will be private. In lieu of flowers, gifts may be made in Ed's memory to the Matthew 25 Fund at Christ the King Parish in Mashpee, 5 Jobs Fishing Road, PO Box 1800, Mashpee, MA 02649.

Published by Worcester Telegram & Gazette from Aug. 26 to Aug. 27, 2021.
To plant trees in memory, please visit the Sympathy Store.
MEMORIAL EVENTS
Aug
27
Funeral Mass
11:00a.m.
Christ the King Church
1052 Pleasant St., Worcester, MA
Funeral services provided by:
Athy Memorial Home
MAKE A DONATION
MEMORIES & CONDOLENCES
Sponsored by Athy Memorial Home.
9 Entries
I was fortunate enough to get to know Ed later in life. I loved his allegiance to Holy Cross and his positive upbeat manner. He always asked me to come over to Southgate for a meal as the food and service was fantastic he said. What a fine man. Rest peacefully in Crusader Nation....
Bruce Munger
September 23, 2021
WE FONDLY REMEMBER UNCLE ED
JUDITH HALEY
Family
September 7, 2021
My deepest condolences to Joe, MaryAnn and family. I will be forever grateful I had the privilege of being friends with this kind, humble and most interesting gentleman who epitomized "the greatest generation". It was a true blessing to have spent time with him through the years, and something my family and I will never forget. While I will miss our visits and conversations, they remain forever in my heart.
Elizabeth Stevens Murdy
Friend
August 30, 2021
Mary Ann, Joe and Family, My heart is sad to learn this news but also joyful that Eddy lived such a long, happy and beautiful life. He was always so sharp, kind, informed, interested in others and the world around him. I´m so grateful for our conversations and laughs. Eddy had quite the sense of humor and he always made me laugh when he said at his age, "I don´t do any long term planning!" He never missed a beat! So funny. A true one of kind individual - so gracious and grace-filled. I will never forget you, Eddy! Sincerely, Julie Daly
Julia D. Stefanini
August 28, 2021
We lose another of the "greatest generation". Ed was a close friend of my dad and I will always remember the laughs they had together. He was a special guy.
Carolyn Willette
Friend
August 27, 2021
Dear Daly family: My late mother , Anne Sullivan Healey, and Ed were classmates at South High School. Ed was very generous and kind to me in the early 1970s when I needed a helping hand. Over the past decade, I have reconnected with Ed and shared many stories about Worcester and his friends. Simply stated, a great man. Tremendous achievements. May he rest in peace, Sean Healey
Sean Healey
Friend
August 27, 2021
Ed is surely one of the best of America's Greatest Generation. From humble roots, he achieved so much, with humility, faith, bravery in WWII, and class in every way. Our family is forever blessed to have known him. We will miss him very much. He is a man for all seasons if there ever was one. His Crusader Nation awaits him in heaven. AMDG, Ed.
Peter Foley
August 26, 2021
Ed will be greatly missed, but more importantly he instilled something in all the people he met that will carry on his legacy forever. It was a great blessing to have met Ed and i will forever be grateful to have had the time I did with him. May he rest peacefully and may God comfort those mourning him.
Jerrica Hassan
August 26, 2021
One of the good guys.... Gone but not to be forgotten... rip my dear friend
Joyce grandmaison
August 26, 2021
Showing 1 - 9 of 9 results