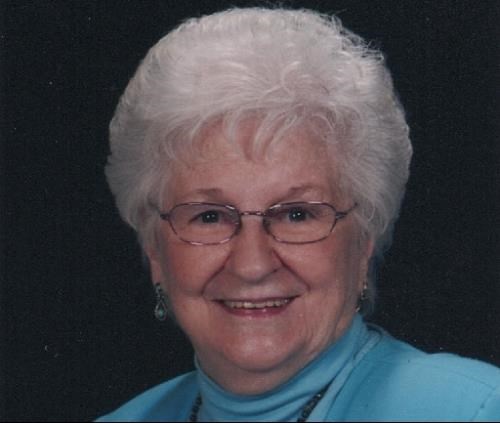 Eleanor was born in Clinton in 1928, the daughter of Stephen C. and Yvonne B (Paquette) McGovern. She attended grammar school at the former Our Lady of the Rosary School, and was a graduate of Clinton High School, Class of 1945.

As a young mother, she was active in the St. John's Mothers' Club, Girl Scouts and the local 4H Club. She was honored to be elected as the first Woman Master of the Sterling Grange, for the 100th anniversary. She served as matron of the Junior Grange and enjoyed many Grange trips to Europe, Mexico, Canada, and across the USA with Martha West and friends. Her children and their friends were her greatest joy and she hosted many backyard parties for them, including her famous Halloween parties, where she would dress up as a hobo. She was a fabulous seamstress, making many of her own clothing items, dresses and coats, along with wedding gowns and bridesmaid dresses. She could knit and do beautiful smocking as well.

In addition to raising her family, she was employed by the former Colonial Press in various positions. She served as a companion to the elderly for three years, and later pursued a career in electronics at Sprague Electric and Digital Equipment Corporation in semi-conductor manufacturing, retiring in 1990.

During retirement, Eleanor was a dedicated volunteer with the Thayer Symphony Orchestra, serving as President of the Friends of the TSO, as Friends Representative on the Board of Directors, office volunteer and part of the "lunch bunch " with friends. She also volunteered for Meals on Wheels for over 10 yrs. and served for 2 terms on the Clinton Cultural Council and the St. John's Church Restoration Committee.

A woman who lived life to the fullest, Eleanor loved hosting dinner parties for friends and family, spending time in Myrtle Beach in the winter months, summers at her camper at the Red Barn Campground in Maine. She was always happiest when spending time with her daughters and sons-in-law, grandchildren and great-grandchildren. She loved attending the family cookout every summer and sharing steamers and lobsters. She also enjoyed decorating her apartment, and was an avid New England Patriots fan, loved family parties and holidays and looked forward to the CHS Class of '45 reunions.

Eleanor's funeral will be held on Saturday, April 24, 2021 from the McNally& Watson Funeral Home, 304 Church St., Clinton, with a Mass at 10:30 a.m. in St. John the Evangelist Church, 80 Union St., Clinton. Burial will follow in St. John's Cemetery, Lancaster. Relatives and friends are invited to attend a calling hour at the funeral home on Saturday morning, from 9:00-10:00 a.m., prior to the Mass. In accordance with current guidelines, the use of face masks and the practice of social distancing, will be required at the funeral home, church, and cemetery. In lieu of flowers, the Gadomski family suggests that memorial donations be made to: CARE Food Pantry, c/o St. John's Church, 149 Chestnut St., Clinton, MA 01510.

Published by Worcester Telegram & Gazette from Apr. 12 to Apr. 16, 2021.
To plant trees in memory, please visit the Sympathy Store.
MEMORIAL EVENTS
Apr
24
Calling hours
9:00a.m. - 10:00a.m.
McNally & Watson Funeral & Cremation Service
304 Church Street, Clinton, MA
Apr
24
Funeral Mass
10:30a.m.
St. John the Evangelist Church
80 Union St, Clinton, MA
Apr
24
Burial
St. John’s Cemetery
Lancaster, MA
Funeral services provided by:
McNally & Watson Funeral & Cremation Service
MAKE A DONATION
MEMORIES & CONDOLENCES
Sponsored by McNally & Watson Funeral & Cremation Service.
7 Entries
So sorry. I have fond memories of Eleanor, my mom's friend since first grade. I always enjoyed our random meetings.
Andrea McGown Mahan
Friend
December 30, 2020
So sad to hear of your moms passing My condolences to all of the Gadomski families . Mrs. Gadomski was a wonderful light in my neighborhood growing up and nice to see her on occasion later on around town may she rest in peace now . May God bless all of you during this difficult time . All the best John
John Denoncourt
Neighbor
December 28, 2020
I am so sorry for the loss of your very vibrant and amazing MOM, Cynthia and the entire Gadomski family.
Suzanne Werner
Classmate
December 24, 2020
Eleanor was a great woman. I had many laughs with her. I will miss her! And also mis her great Facebook comments! I could always count on her to chirp in on a picture of my granddaughter and Grandson! I just loved her!!❤❤
Maureen Dorazio
Friend
December 23, 2020
So sorry for your loss. Your mom was Special-one of a kind: adventurous, determined, independent `til the end! Banana Splits for supper on Sunday nights! You go Girl! Rest in Peace.
Christine Gaudreau
December 22, 2020
Very sorry for the loss of this beautiful lady. May god bless the family during this difficult time.
Holly Riopel
Friend
December 22, 2020
What a beautiful tribute to a wonderful woman who lived and enjoyed every day of her life. I did not know about all of her community service but it does not surprise me that she gave back to her community. She loved to finish her Facebook comments with “Love, Ma”...that always made me smile. I was lucky to know her. She will be missed.
JoDee and Jeremiah Doyie
Friend
December 22, 2020
Showing 1 - 7 of 7 results