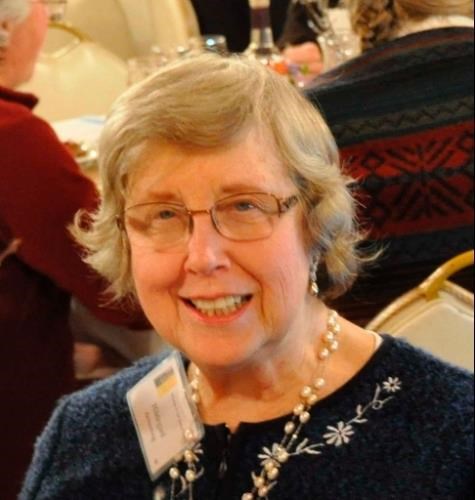 Worcester - Hildegard Armstrong, 81, died November 13, 2019, after battling many ailments, including cancer. She was born April 30, 1938, in Grosse Point, Michigan, to Heinz and Adelaide Nixdorf.

She was raised in Grosse Ile, MI and graduated from Vassar College in Poughkeepsie, NY with a Bachelor of Arts in English. In 1962 she married Bob Armstrong, together they moved to Washington, DC where she worked for the Smithsonian Institute. In 1964, the couple moved to Worcester, Mass., where they raised a family of three boys. They celebrated their 57th anniversary this past April. She spent several years working as a Director of Public Relations for the Higgins Armory Museum. However, the large majority of her time over the years was spent being involved in many Worcester based charity organizations. Specifically, Hildegard served as a BOD Member, President, or dedicated volunteer for the following organizations: ARTSWorcester; the Junior League; the All Saints Church Boys Choir; Music Worcester; Preservation Worcester (she was a Docent and gave architectural tours); and the Hall Club. She received the Worcester Women in Development Volunteer award in 1997 for her distinguished work on behalf of ARTSWorcester office and the Annual Arts Award from ARTSWorcester for 2000.

Perhaps her most defining interest was with music, which she personally enjoyed and introduced her family to. She was a member of the Worcester Chorus for 54 years, singing in countless concerts, and enjoying international trips with the chorus accompanied by Bob. She and Bob loved listening to classical music while assembling wooden jigsaw puzzles and were opera aficionados. While battling innumerable heath issues in her last few years she maintained her involvement in the Worcester Chorus and demonstrated a positive attitude and strength that was hidden behind her quiet and non-complaining demeanor.

She is survived by her husband of 57 years, Bob; son Scott and his wife Kathy Gang of Wisconsin and Connecticut; son Lincoln and his wife Andrea of West Springfield Mass.; son Conrad of Boston; and 7 grandchildren, whom she relished in hearing about as they grew up. She is also survived by her sister Laura Bernstein of Lincoln, Mass. She was predeceased by her sister Deedee Newcomb, formerly of Riverhead NY.

There will be a service to celebrate her life at All Saints Church, 10 Irving St., Worcester, MA, on Saturday, December 7, 2019, starting at 11 AM, followed by brief interment in the Church's columbarium and a reception in Huntington Hall at All Saints. In lieu of flowers, donations in honor of her life may be made to any of the three non-profit organizations - ARTSWorcester, Preservation Worcester, and Music Worcester.

Published by Worcester Telegram & Gazette from Nov. 15 to Nov. 17, 2019.
To plant trees in memory, please visit the Sympathy Store.
MEMORIAL EVENTS
Dec
7
Service
11:00a.m.
All Saints Church
10 Irving St., Worcester, MA
Dec
7
Interment
in the Church's columbarium
MA
MAKE A DONATION
MEMORIES & CONDOLENCES
8 Entries
Mr. Armstrong, Scott, Lincoln, Conrad, my deepest belated condolences for your loss. I just want to tell you that my memories of Mrs Armstrong are of a warm loving person who brought light into my life. Indeed your whole family was a warm light to me. I am honored and grateful to have known Mrs Armstrong. She has left an indelible mark on my life of which I am deeply greatfull. God bless you all.
Louis Berard
October 27, 2021
Remembering Hildegard today. She was an inspiration when I worked at Briarwood. Intelligent, lovely, and always with that lovely smile despite all her physical challenges. I know she is enjoying a special place in heaven.
Anita Thomas
Friend
November 9, 2020
Oh Dear Hildegard,
How greatly we admired and loved you
With all your gentleness and grace,
Sweetness and service, calmness and caring,
And passion for magnificent music
Which you shared so freely and radiantly
With so many people and organizations!
Even illnesses could not dampen nor deaden
Your strong, steady, and steadfast spirit.
Thus, with all the company of heaven
We rise up and call you blessed!
Your departure from this world
Leaves us sad and sorry.
Still we celebrate now the mystery of your
And God's loving labor, justice, peace and joy
That never Die!

To cherished Bob and family we send our embracing
fondness and friendship, comfort and sympathy.

Edith and Gordon Swan
Gordon Swan
December 6, 2019
Dear Bob and family,
I am so deeply sorry for your loss. Hildegard's positive attitude was inspiring and she only ever had kind words for me and my puzzling endeavors. I feel so fortunate to have crossed paths with her and your family via the Puzzle Parleys. May your memories continue to fill you with both her strength and love.
Kindly, Deb Dana
November 29, 2019
I had the good fortune of meeting Hildegard while conducting Worcester All America City tours. Hildegard hopped aboard the bus as a tour guide for Preservation Worcester,and I learned more about Worcester that day than I ever had hoped for in a lifetime! I worked at Briarwood for 15 years, so when Bob and Hildegard arrived, I was thrilled to know she would be a part of the community. Years passed, and indeed, as with everything she touched, she was a valued asset and voice of wisdom as well as loving friend to the Briarwood Community. She smiled and never complained until the end. She was a gentle warrior. No doubt,she will be missed by many.
Anita Thomas
November 22, 2019
Dear Bob and family,
My deepest condolences to you on the passing of Hildegarde. She was a wonderful woman that I had the pleasure of singing with in the Worcester Chorus. May your happy memories help to sustain you.
Sincerely,
Bernadette Nelson
Bernadette Nelson
November 17, 2019
Such a great loss to her family and the community in Worcester. I had the privilege of working with her at Artsworcester where I learned many valuable skills for managing databases that, now, years later when I find myself utilizing them, I always think of her. She was a true professional who generously gave of herself and inspired me to volunteer. To Bob and her family, my thoughts and prayers. I will cherish my memories of her always.
Kelly Marcimo Everitt
November 16, 2019
What a pleasure it was to get to know you and Bob these last few years. My sister and I will always remember you with love and a smile
You are now singing with angels
Love
Lisa
Lisa Lee
November 15, 2019
Showing 1 - 8 of 8 results