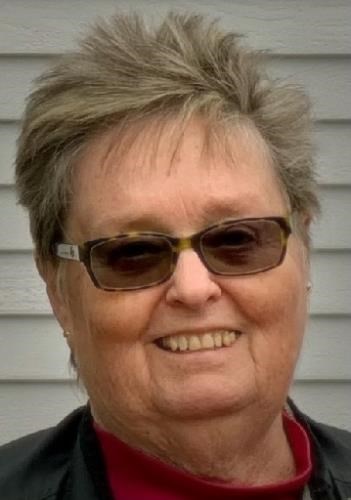 Wellfleet, MA - Joann D. Eldridge, 81, passed away in the early morning hours on January 26, 2021 of Merkel Cell Carcinoma. She leaves behind her life partner of 38 years, Ruth Ostenson, and her beloved Ragdoll kitty, Luna.

Joann was born on August 31, 1939 in Milford, to Joe and Ethel Eldridge. She spent her early years in Worcester, until her parents moved to the Sagamore/Buzzard's Bay area. Joann attended Bourne Grammar School and Bourne High School, graduating in 1957. She often traveled with her father up and down the West Coast waterways, as he was a sports fisherman. Because of his tutelage, Joann entered a state-wide fishing contest at age10 and won first prize, traveling to the Massachusetts State House to receive her award.

Joann graduated from Quinsigamond Community College in 1968 and from Worcester State College in 1970 with a B.A. in English. She had a love of literature and received her M.A. in English from Assumption College in 1972. She spent 30 years at Doherty High School in Worcester where she taught Advanced Placement English, coordinated drama shows, and was advisor to the Literary Magazine. Several of her former students have remained in touch and have commented on how influential she was in their lives. She also taught part-time at several of the colleges in the Worcester area specializing in Women in Literature and Writing Skills.

While at Doherty High School, Joann started the first computer lab in the English Department. Subsequently, she orchestrated the donation of over 400 computers to the school so that every department had its own computer lab. She was well ahead of her time as she became an expert in the integration of curriculum and technology in the early 1990s. When she retired, she was a technology consultant to the Worcester School Department where she created the position of Legacy Teacher. She was also a consultant to the Provincetown School System assisting many individual teachers and administrators in the integration of curriculum and technology. In addition, she had a small business, Damn Good Sites, creating websites for various organizations.

Joann had a great ability to reinvent herself as she was a very successful teacher of English, a technology consultant, a web "mistress", and a very creative and successful photographer and digital artist. She was a member and officer of Cape Cod Viewfinders where she honed her skills and achieved the level of Master Photographer. She was also a member of the Cape Cod Art Center's Digital Art Group. She entered many local, national, and international photography contests and won many awards.

She loved living on Cape Cod and Blackfish Creek, being close to the ocean and beautiful beaches, and enjoying spectacular sunsets. She also loved spending winters in Key West, Florida. Joann had a very quick sense of humor and always enjoyed many close relationships. She will be missed by the many, many friends she acquired over the years.

A Memorial Service to celebrate Joann's life will be held at a later date when Covid restrictions have lessened.

To share a memory or leave a message of condolence, please visit gatelyfuneralservice.com.

To plant trees in memory, please visit our Sympathy Store.
Published by Worcester Telegram & Gazette from Jan. 29 to Feb. 1, 2021.
MEMORIAL EVENTS
No memorial events are currently scheduled.
To offer your sympathy during this difficult time, you can now have memorial trees planted in a National Forest in memory of your loved one.
MEMORIES & CONDOLENCES
7 Entries
Joann (Ms Eldridge at Doherty High where I graduated in 1979) was one of my favorite teachers. She was fun, witty and intriguing. Most importantly, she helped me to find my own voice as a writer, and she gave me the confidence to keep writing. I´ve been teaching writing for 25 years and have published a few books, and I´ve always felt grateful to Joann for her support and belief in me when I was starting out-good teachers really do make a difference. I´m happy to hear that she found joy and success as a photographer and digital artist, that she had lots of friends and love in her life, including her life-time partner, Ruth. My condolences for this enormous loss. May Joann´s great spirit live on.
Marilyn
April 20, 2021
Ms. Eldridge was an excellent teacher at Doherty high school. The studies of classical literature in her class remain in my memories to this day. She always encouraged and nurtured us to be creative and expressive in our interpretations of the works. May her memory be eternal.
Leslie Dowd
March 14, 2021
Joann was an original. I use her phrase what part of no do you not understand ? Her legacy as a friend endures. Xxolbm
Linda B. Miller
February 14, 2021
Thoughts and prayers are with family and friends. Loved Miss Eldridge´s English class at Doherty!
Kristin Vasel (Forjette)
February 5, 2021
my favorite teacher
John PINTO
February 2, 2021
Joann was a feisty woman. Her intelligence and her humor made every boring faculty meeting much more interesting. I learned so much from her. She gave so much to the world.
Linda Sullivan
January 30, 2021
My thoughts and prayers are with Ms. Eldridge's family and friends. She was my high school English teacher at Doherty and one of my favorite teachers. Some of my fondest memories are from her classes. May she rest in peace.
Judy Royal
January 29, 2021