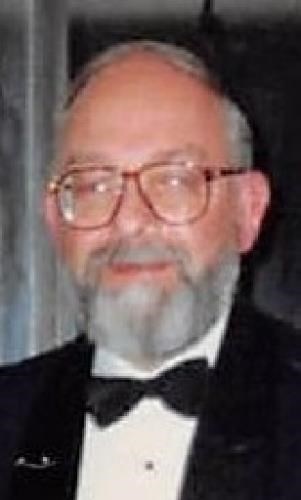 NORTHBOROUGH - Richard W. Pierson, affectionately known by all as "Dick" passed away without warning on Tuesday, January 19, 2021; he was 86 years old and the beloved husband of Mary Jane (Vrooman) Pierson. Dick was born in Cleveland, Ohio, one of three children to the late Willis T. and Mary (Kocka) Pierson. He studied at Marietta College where he was awarded a Bachelor's degree, and later received his Master's degree in History from Clark University. While enrolled at Marietta, Dick was a proud member of the Alpha Tau Omega fraternity. He honed his competitive abilities as part of Marietta's rowing team and upon his graduation, returned to coach the crew teams. Over the years Dick was instrumental in expanding the sport of competitive rowing within many of the North East colleges and universities. Dick would later coach Clark University's crew teams to numerous victories. In his honor a rowing shell bears his name.

1n 1961 Dick relocated to Northborough. For most of his career Dick worked in the admissions office of Clark University, many of which he served as Clark's Dean of Admissions until his retirement in 1995. Dick had a passion for travel and looked forward to the many global destinations for work and for pleasure. He was known for his exceptionally kind heart and giving ways. He was also known for being able to recommend places across the nation to find a great meal; just ask! Dick was an avid reader, most especially anything historical. He also found pleasure in hosting and attending social gatherings were he could spend time with friends; old and new alike. To Dick, the most important times in his life revolved around his family; he looked forward to following his children's and later, his grandchildren's many activities.

In addition to his devoted wife of 31 years, Mary Jane, Dick is survived by his son James Pierson and his wife Miranda of Mattapoisett, his two daughters Susan Wiegersma of Douglas and Barbara Pierson of Worland, Montana and his beloved grandchildren, Charles and Steven McIntyre, James Pierson and Randy Wiegersma. Dick was preceded in death by his first wife, Marylouise (Landis) Pierson in 1984 and by his siblings Allan Pierson and Eleanor Matthews.

Calling hours will be held from 2-4pm on Sunday, January 24, at Hays Funeral Home, 56 Main Street, Northborough. A funeral service will be held at 10:30am on Monday, January 25, in St. Bernadette Parish, 266 Main Street, Northborough. Burial will follow in Cushing Cemetery, Mattapoisett. All services will follow current Massachusetts covid19 guidelines and gathering restrictions, please plan accordingly.

In lieu of flowers Dick's family respectfully request donations be made to the Northborough Food Pantry, 37 Pierce Street, Northborough, MA 01532 ( nfpantry.org) To leave a condolence, or to share a story, please visit www.HaysFuneralHome.com.

To plant trees in memory, please visit our Sympathy Store.
Published by Worcester Telegram & Gazette from Jan. 21 to Jan. 22, 2021.
MEMORIAL EVENTS
Jan
24
Calling hours
2:00p.m. - 4:00p.m.
Hays Funeral Home
56 Main Street, Northboro, MA 01532
Jan
25
Funeral service
10:30a.m.
St. Bernadette Parish
266 Main Street, Northborough, Massachusetts
Funeral services provided by:
Hays Funeral Home
GUEST BOOK
Sponsored by Hays Funeral Home.
3 Entries
I had the pleasure of being coached by Dick during my years at Clark U. 1962-1966. Clark was never a powerhouse but Dick struck a wonderful balance of working hard, doing the best you could individually and as a team.... and having some fun along the way. Dick made a difference in my life ... He will be missed by many!
Penn Estabrook
January 25, 2021
Our deepest sympathy to Mary Jane, Barbara, Susan, and Jim and their families. Dick was our dear friend for well over 40 years and we'll miss him greatly. At Oktoberfests, dinner parties, and many other gatherings with Dick and Mary Jane and other Clark friends, it was always a treat to spend time with Dick. He was gracious, dry-witted, and a captivating story teller. We feel grateful for his friendship and will treasure our memories of him.
Jean and Roger Keith
January 24, 2021
My condolences to my cousin Mary Jane and dicks family. Always looked forward to their visits to Delmar and Amsterdam. In the am getting his tea for him. Will surely miss him. Great gentleman.
Judy Cox
January 23, 2021