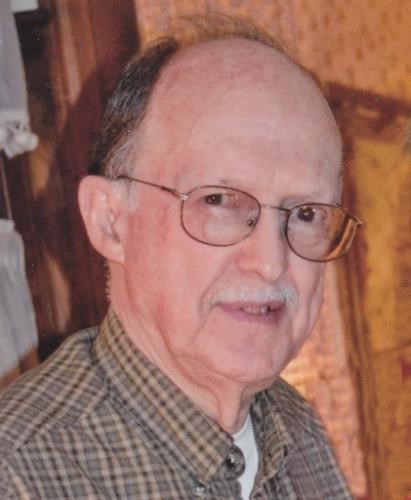 Brookfield - Robert L. Langlois, 85, passed away on Tuesday, April 13th, at the Harrington Memorial Hospital, Southbridge, after a brief illness.

His beloved wife and life partner of 45 years, Elena "Lena" (Sandole) Langlois, passed away this past January 21st. He leaves his two sisters, Marcia Kelly of Webster and Nancy Schiller of Port Orange, FL; and 14 beloved nieces and nephews. He was born in Southbridge, the son of Leo and Gertrude (Stockman) Langlois. He grew up in Charlton and graduated from Charlton High School as its Valedictorian.

Bob worked for Southbridge Savings Bank in the Charlton branch for 45 years, starting as a teller and eventually becoming the branch manager. Bob was a dedicated, active member of St. Anne-St. Patrick Parish in Sturbridge, serving as a Eucharistic Minister, Lector, Altar Server, a member of the church choir and assisted with the parish finances. He was a member of the Masons for over 50 years at the Quinebaug Lodge A.F. & A.M in Southbridge. Bob volunteered at Harrington Memorial Hospital in Patient Transport. Bob loved singing and was a member of the Worcester Men's Barber Shop Singers and the Quinebaug Valley Singers. He loved animals, especially cats and for years Bob was faithful to feeding many feral cats at their home in Southbridge which the family has continued doing for him when he no longer could. Bob was a true gentleman and was always there to help his family and others in need in any way he could. He did so with a genuine smile that warmed all of our hearts.

Bob's family would like to sincerely thank all those who so generously supported Bob with prayers, visits, cards, food, calls, etc. and so much love.

To plant trees in memory, please visit our Sympathy Store.
Published by Worcester Telegram & Gazette from Apr. 16 to Apr. 18, 2021.
MEMORIAL EVENTS
Apr
20
Calling hours
8:30a.m. - 9:30a.m.
Daniel T Morrill Funeral Home
130 Hamilton St, Southbridge, MA 01550
Apr
20
Funeral Mass
10:00a.m.
St. Anne's Church
16 Church Street, Sturbridge, Massachusetts
Funeral services provided by:
Daniel T Morrill Funeral Home
GUEST BOOK
Sponsored by Daniel T Morrill Funeral Home.
4 Entries
My condolences to his family and friends. I knew Bob years ago when I lived in Worcester, Holden and Natick. He was a very nice person.
Lloyd Ostiguy
April 19, 2021
I am saddened by your death, Bo, but I am so very happy that you are with your loving Lena. Bob, you were the best and I have so many funny memories working with you. You truly were one of a kind and will miss you. Rest, Lora
Lora Baldracchi
April 16, 2021
Our daughter, Laura Jette, said it perfectly, Bob was a special person: kind, gentle, thoughtful & compassionate. Also recall his time, after retirement, volunteering @ Harrington Hospital. Yes, God will be waiting w/ open arms. RIP...
Rosemary & Jim Howard
April 16, 2021
My heart goes out to all who knew Bob. The world has lost a treasure!! Voice of an angel. He was such a kind speaking gentle soul. A true old school gentleman. I feel blessed to have known him. God is definitely welcoming Bob into his kingdom of heaven.
Laura Jette
April 16, 2021