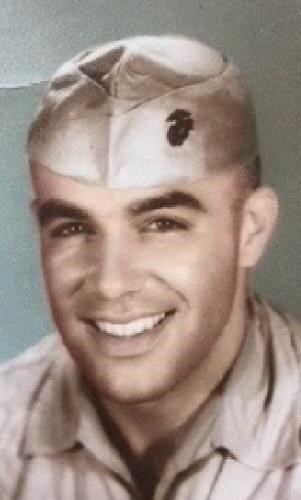 He served four tours of duty in Vietnam, receiving the Silver Star and Bronze Star medals for conspicuous gallantry in action, as well as numerous other medals and ribbons, including four Purple Hearts for injuries inflicted by enemy fire. While he survived these injuries, one was sufficiently grave that a Marine officer was dispatched to his parents' house to inform them that his condition and prognosis were both poor. Typically, such visits are made to inform a service member's next of kin that their loved one has been killed in action. Sergeant Blair's family was hugely relieved and grateful, therefore, when he called from his hospital bed three days later to announce his survival. He went on to spend a total of 30 years in the Corps, retiring in the Pacific Northwest, where he served another 18 years as a member of the Clark County Sheriff's Department in Washington state.

Larry loved good storytelling and embellished his own with humor, accents, sound effects, and accurate details. He remembered jokes, poems, and lyrics he heard throughout his life and enjoyed sharing them with others.

A memorial service honoring Larry's life will be held at a time to be determined in Vancouver, WA.

Condolences may be sent to his family at

To plant trees in memory, please visit our Sympathy Store.
Published by Worcester Telegram & Gazette from Apr. 15 to Apr. 18, 2021.
MEMORIAL EVENTS
No memorial events are currently scheduled.
To offer your sympathy during this difficult time, you can now have memorial trees planted in a National Forest in memory of your loved one.
GUEST BOOK
3 Entries
Blair you will be missed! I remember that you allways had a good story to tell. And how proud you where of been a Mariners Rip
Oscar
April 27, 2021
SEMPER-FIDELIS YOUR TOUR WAS OUTSTANDING REST IN PIECE
Eddie O'Connell
April 16, 2021
From one veteran to another. Welcome home Sgt. Major Blair job well done sir. You will forever sir REST IN PEACE
SCOTT D. OUELLETTE
April 16, 2021