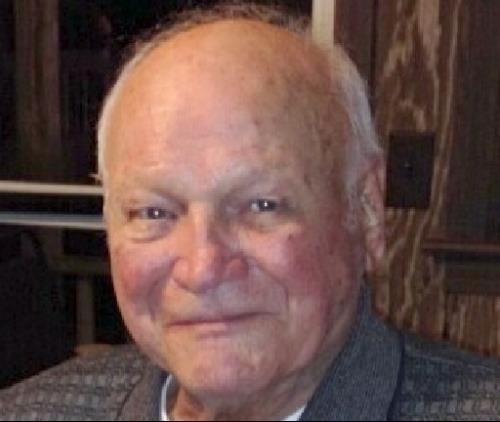 Vincent was born in Worcester, one of twelve children of Vito and Teresa (DeFalco) Ricciardi. He graduated from Commerce High, and joined the U.S. Navy during World War II, serving his country proudly in Europe taking part in the invasion of Utah beach during D-Day. Upon discharge from the Navy, Vincent married the "Love of his life" Mary Rinaldo and began their 60-year life of love raising their family. Vincent was appointed to the Worcester Fire Department and began his 30 plus year career on Hose 9 and retiring from South Division as Lieutenant of Ladder 2 in 1974. They continued to live in Worcester until moving to their summer home in Dennis Port on Cape Cod in 2000.

Vincent's wife 60 years Mary passed away in 2007. He is survived by his three children, Vincent F. Ricciardi, Jr and his wife Catherine of Bolton, Carol Rano and her husband Robert of Worcester and Elaine Boike and her husband Sam of Northborough; eight grandchildren, he adored, Jennifer, Carina, Vincent III, Jonathan, Michael, Peter, David and Marialena; eight great grandchildren; A brother, Vito Ricciardi, Jr two sisters, Rose Seed and Gilda Dagostino all of Worcester; Many nieces, nephews, extended family and his devoted Basset lane neighbors whom he shared many happy hours with each day at 4 pm, Jack, Coach, Joe and Jeannie Mack. Besides his parents and wife; a daughter, Linda passed away in 1952, five brothers, Emilio, Anthony, Alfred, Albert and John Ricciardi and three sisters, Mary Ricciardi, Phyllis Quinn and Lillian Baroni predeceased him.

Vincent a patriotic world war II Navy veteran of the "Greatest Generation" was a member of the Eastside Improvement Club, the Eastside Post 201 American legion, and Italian American Veterans of Foreign wars Post 3. Notably, Vincent was a part of a little-known Naval exercise named exercise tiger, prior to the invasion of D-Day, celebrating its anniversary each April at Fort Tabor in New Bedford the honoree placing the wreath each year. He was also honored to take part on an Honor Flight New England trip to Washington DC visiting the World War II and other memorials. Vincent also loved to golf when he could and found many enjoyable rounds everyday at Green Hill and the courses of the Cape, Dennis Pines and Highlands among others.

Friends and relatives are invited to attend calling hours Friday, February 1st, 2019, from 4 pm to 7 pm in the MERCADANTE FUNERAL HOME & CHAPEL, 370 Plantation St. his funeral will be celebrated Saturday, February 2nd from the funeral home with a procession to St Anne's Church, 130 Boston Turnpike Rd Shrewsbury where his mass of Christian burial will be held at 10:00 am. Burial with military honors will follow in St John's Cemetery. In lieu of flowers, memorial remembrances in his name can be made to EXERCISE TIGER FOUNDATION, c/o Abrams Company Burt's Knights USABOT, 162 Summer Street, Arlington, MA 02474 or the Honor Flight New England, P.O. Box 16287, Hooksett NH 03106.

The Ricciardi family would like to extend a heartfelt thank you to the Doctor's and staff of Cape Cod Hospital Muger unit 3 for the care, comfort and compassion they gave to our father during a difficult time.

To plant trees in memory, please visit our Sympathy Store.
Published by Worcester Telegram & Gazette from Jan. 30 to Feb. 1, 2019.
MEMORIAL EVENTS
Feb
1
Calling hours
4:00p.m. - 7:00p.m.
MERCADANTE FUNERAL HOME AND CHAPEL - Worcester
370 Plantation Street , Worcester, MA 01605
Feb
2
Mass of Christian Burial
10:00a.m.
St Anne's Church
130 Boston Turnpike Rd, Shrewsbury, Massachusetts
Feb
2
Burial
St John's Cemetery
Funeral services provided by:
MERCADANTE FUNERAL HOME AND CHAPEL - Worcester
GUEST BOOK
Sponsored by MERCADANTE FUNERAL HOME AND CHAPEL - Worcester.
3 Entries
Heartfelt sympathy goes out to the family and friends during this most difficult time. I hope at 1Thessalonians 4:14 will bring you comfort Knowing that there id a future for the ones we have lost in death can be reassuring.
S H
April 15, 2019
To all in the Ricciardi family from all in my family, we are sorry for the loss of "Vinny".
He was a great man, friend and patriot. May God's love bless your family in this difficult time with strength and comfort.
Paul Rinaldi
February 4, 2019
Dear Ricciardi Family,

So sorry for the loss of your Dad. Thoughts and prayers are with you.
Sue & Lou Rinaldi
February 4, 2019