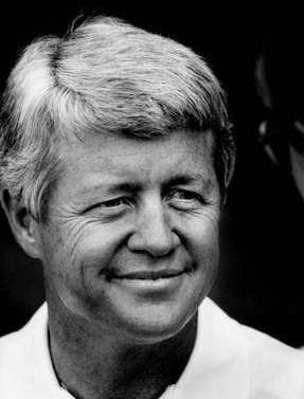 George was one of six children of Donald Stewart and Margaret Galloway MacIntyre. He was born on April 30, 1939 in St. Petersburg, Florida. He was raised in Jacksonville, Florida and graduated in 1957 as President of his Senior class at Andrew Jackson Sr. High School where many lifelong friendships began.

George excelled in sports and received many awards in athletics. He was First Team All­State in football, basketball and baseball. He graduated from the University of Miami in 1961 where he played quarterback and defensive back. On June 17, 1961 he married his high school sweetheart, Betty Harvey. The loving bond they shared in the 54 years of marriage was a true love story.

Throughout his life, Coach's genuine care and concern for others was evident, enriching the lives of anyone who crossed his path. He had a special way of always making others feel like they were most important. He also had an inherent way of blessing others when they came to visit. His faith in God was unwavering and his love for his family, players and friends was always present. As a husband, father and grandfather, he was a wonderful example of a Godly man. Always an optimist, he had a contagious, enthusiastic spirit that will always live on. Coach faced many obstacles in his life, though he never complained. He was a special man and leaves a remarkable legacy for us to follow. We will all miss his sweet smile but we are secure in the fact that we will see him again in glory.

Memorial gifts in his honor may be given to the Fellowship of Christian Athletes, 449 Metroplex Dr., Nashville TN 37211 or the Mid­South MS Society, 214 Overlook Circle, Suite 153, Brentwood TN 37027. An online guestbook is available at AustinFuneralService.com. (615)377-0775.

My deepest condolences to Betty and all of the family. You are in my prayers.
Gloria Bell Barton
January 16, 2016
God bless you Uncle George may you RIP. Thank you for all the great memories growing up. I am very proud to be your niece. This is not good bye, this is see you later. Say hi to Dad, Papa, Grandma and Donna. See you in heaven! Love you always Bonnie Sue
Bonnie MacIntyre
January 12, 2016
I went to school with George Macintyre in the 50's at Kirby Smith and Andrew Jackson... in our hometown Jacksonville, FL. I remember him as having the record 100 yard dash at Kirby and he was very athletic. I left school early and joined the USAF in 1956 and lost touch with most all of my school friends and acquaintances... but I later learned that he had become quite successful in his field as Head Coach of the Football Team at Vanderbilt. I was very pleased to see his success and later learning that he was a born again Christian which to me... is most important of all.I pray God himself will grant the Peace that passes all understanding to all of his family members and friends.
Vernon B. (Bert) Hanwell III
January 12, 2016
Dear Betty,
It has been many years; but childhood friends never forget each other. My blessings go out to you and your family.
Kenneth Sutton
Kenneth Sutton
January 11, 2016
Thoughts and prayers!!
Beth Christian
January 9, 2016
Our Uncle George... with our lord in heaven!! My love and prayers always to his beautiful family whom he will be watching over!! I love u all!!
Paul and Edie Beaulieu
January 9, 2016
RIP Uncle George. We always enjoyed having you come and see us and hearing your football stories. Will always cherish those memories at the beach. We all admired you so much.
Patricia Quilty
January 9, 2016
RIP Uncle George. So much has been written and said. He was Such a good man, and what's a better epitaph than that?
Susan Haddad
January 9, 2016
Matt and family, I was sorry to see that your father has passed away. Thanks for sharing memories of your time with him. You are in my thoughts and prayers. Nancy Crockett Donlon (daughter of another fine "George")
January 9, 2016
Coach Mac was a great man that I had the opportunity to get to know while I played at Clemson. He taught and showed me more about how to become a better person than I was at that time in my life. Coach always had those little special ways to help us all, that only he could do. Over the years, I had told him a couple of times what he meant to me and how he helped to prepare me for the game of life. Coach, just the other day I was thinking of you and wish I had called you one more time, just to say thanks one more time. Our thoughts and prayers are with Coach Macs family. Sincerely, I am, G.G. Galloway , Clemson 1972-1976
G.G. Galloway
January 8, 2016
So many good memories of Coach Mac and the Macintyre Family. Forever in my mind is his coming down the aisle at Woodmont with that warm smile on his face with the collection plate in hand and patting my daddy on the back. With much love, Carolyn Hodges Simpson
January 8, 2016
Rest in peace uncle George. You will be missed greatly. Have always looked up to you, the passion that you've had for football and family. From your playing days at the University of Miami, in the late 1950's and all the years of being a coach and coach of the year in 1982 for Vanderbilt. We love you God bless.
Sam MacIntyre
January 8, 2016
I got to know Coach Mac covering high school sports during his time at Donelson Christian. He was unfailingly kind and friendly. Coach Mac was one of those people who had a gift for making you feel good after you talked to him. May his memory be forever blessed.
Paul Ladd
January 8, 2016
Coach Mac was a friend and inspiration to me early in my career. He and Betty hosted my wedding reception, and I grew to regard Coach, Betty, M and M as my family. Great man. Great family. Great example!!!
Paul Keckley
January 8, 2016
Aunt Betty & family, I'm soo sad to hear of your loss of a great husband, father & grandfather. Uncle George was sure a fighter, rest in peace
Rosemary MacIntyre
January 7, 2016
One of the nicest men that I have ever
known. Rest in peace George from a fellow MS patient.
John Helton
January 7, 2016
May God bless this family as they will miss their loved one, share & laugh his memories! God Bless you all.
Joe & Janice Cimino
January 7, 2016
Dearest Betty and Family, Our thoughts and prayers to each of you. George was such a strong fighter with this disease. Your love and care helped him through these many difficult times. Jesus helped and strengthened him through these many years. Continued prayers. In Christian Love, Wesley (Andrew Jackson 1957) and Jackie Dicks John 14:1-14
Wesley & Jackie Dicks
January 7, 2016
I CONSIDER GEORGE ONE OF THE GREAT MEN I'VE HAD THE CHANCE TO MEET IN MY LIFE.
RIED MULLIN
January 7, 2016
Showing 1 - 20 of 20 results