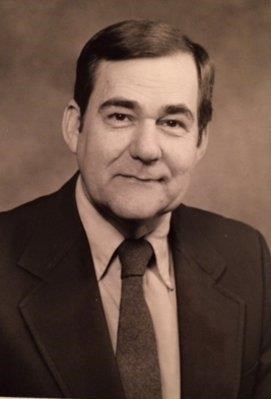 Joel Raymond Buchanan, 88, of Nashville died suddenly on May 7, 2017 in Nashville. Born in Darwin, VA, he was the son of Rufus Lafayette Buchanan, Sr. and Grace Honaker Buchanan. He was predeceased by his brother Rufus Lafayette Buchanan, Jr. He is survived by his loving wife of 64 years, Jane Gray Buchanan and their two sons, Dr. Joel Raymond (Dr. Julie Fagan) Buchanan, Jr. who is on the faculty of the University of WI Medical School, Madison, WI and Stephen (Steve) Gray Buchanan, President of Opry Entertainment and Executive Vice President of Ryman Hospitality. He is also survived by two grandchildren, Melissa Paige Buchanan of Chicago, IL, and Jeffrey Alexander Buchanan of Madison, WI, and by a brother-in-law Dr. Allan Shepp of Waltham, MA, a niece, two nephews and a great nephew.

Moving with his family to Murfreesboro, TN at the age of nine months, Joel made his home there through his high school years. A scholarship student at Vanderbilt University, he graduated with Tau Beta Pi honors in chemical engineering and accepted a job with Union Carbide in Oak Ridge, TN. He was tapped for enrollment in the prestigious Oak Ridge School of Reactor Technology, operated by the Massachusetts Institute of Technology, where during two years of graduate work he was "re-tooled" as a nuclear engineer. He was co-founder of Oak Ridge National Laboratory's Nuclear Safety Information Center and the Nuclear Operations Analysis Center of which he served as director. He edited the internationally acclaimed journal, Nuclear Safety.

Joel was highly respected internationally for his expertise in the field of nuclear safety and did consulting at home and abroad over a long period. He was a delegate to the 1964 United Nations conference, "Atoms for Peace" in Geneva, Switzerland. After the Three Mile Island (TMI) accident in 1979, he was on special assignment to the Electric Power Research Institute (EPRI), Palo Alto, CA. He chaired the United Nations Committee that reported on the TMI accident for the International Atomic Energy Agency (IAEA), Vienna, Austria. For several years he was a consultant for the National Academy of Science Committee on the Risks Associated with Nuclear Power. He received many awards during his career, including one from the US Dept. of Energy for helping to solve the conundrum of the TMI accident.

Kind, modest, and unassuming, Joel was a loving husband and father to his two sons, participating in many of their activities while they were growing up. One of the highlights of the year was the annual family vacation, which took the Buchanans to most of the fifty states and to Mexico. Joel was active in Oak Ridge community life, serving as president of the Oak Ridge Camera Club, the UN Committee of Oak Ridge, Oak Ridge Astronomy Club and on the boards of several other organizations, including the Oak Ridge Civic Music Association and the Upstairs Gallery. He served for several years as chairman of the Photography Division of the Knoxville Dogwood Arts Festival. He was active in the United Church of Oak Ridge for more than fifty years, serving in various capacities and as board chairman.

Joel retired in 1991 after forty years of service in his chosen and "especially satisfying" technical profession. He vowed to "turn the page". The one role he retained for years was that of chairman of the Publications Committee of the American Nuclear Society.

Joel was an avid reader with a broad range of interests. He was also a skilled photographer, exhibiting widely. Retirement made it possible for the Buchanans to pursue their mutual interest in photography and world-wide travel, with "photography safaris" bringing a great deal of pleasure and meaning to life. In May 2012 the Buchanans moved to Nashville, where they found a welcoming new home at Richland Place.

Joel was a member of Westminster Presbyterian Church, 3900 West End Ave., Nashville. A Memorial Service will be held there at 10:30 AM on Thursday, May 11, with visitation afterwards. A private burial service will be held at Mt. Hope Cemetery in Franklin.

In lieu of flowers, contributions can be made to the United Church of Oak Ridge, 85 Ky. Ave., Oak Ridge, TN 37830; the Westminster Presbyterian Church Memorial Fund; or the Salvation Army.