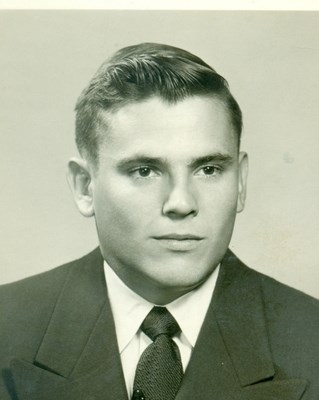 Lafayette - A Mass of Christian Burial will be celebrated on Wednesday, September 18, 2013 at 10:00 a.m. at Our Lady of Fatima Catholic Church for Arthur James LeBreton, Sr., who died peacefully in the comfort of his home on September 14, 2013, with his loving wife by his side. Visitation will be at Fountain Memorial Funeral Home beginning Tuesday, September 17, 2013 from 2:00 p.m. until 9:00 p.m. with a rosary prayer at 7:00 p.m. Visitation will continue on Wednesday morning from 8:00 a.m. until 9:30 a.m. Burial will follow the mass at Fountain Memorial Cemetery.

Arthur was born in New Orleans on November 28, 1931 to Guy J. LeBreton Sr. and Marietta Marie Schneidau LeBreton. He was raised in Metairie, LA and served a short time in the United States Coast Guard Reserves. He graduated from Louisiana State University in 1955 with a degree in Petroleum Engineering. After graduation, Arthur worked for Halliburton as a field engineer in Venice, LA. He was later assigned to field work in Lake Charles and Houma as he became a District Superintendent. Arthur was transferred to Lafayette in 1970 and was the District Manager who supervised the construction and opening of Halliburton's Lafayette office on Southpark Road. He was well respected by his employees and retired in 1993 after 38 years of service to Halliburton.

Arthur was a member of the Petroleum Club of Lafayette and the Society of Petroleum Engineers. Following his retirement, Arthur enjoyed fishing, duck hunting, LSU football games at Tiger Stadium, and cooking large meals for family and friends. But Arthur's most important focus was his family. He thoroughly enjoyed family gatherings during the holidays and cooked Sunday dinners at his home each week to keep everyone close. He was blessed to have all of his family close to him and visit weekly.

The LeBreton family wishes to thank the medical staff of Our Lady of Lourdes Hospital for their compassion and care during Arthur's hospital stays and the staff of Hospice of Acadiana for their kindness and assistance in getting him comfortable at home with family.

Online obituary and guest book may be viewed at www.fountainmemorialfuneralhome.com.