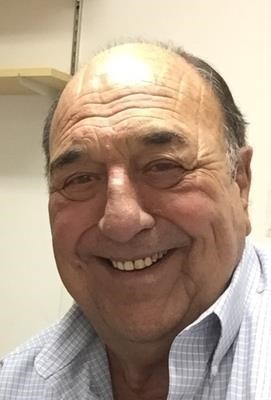 Lafayette - A 1:00 p.m. Mass of Christian Burial will be held on Wednesday, September 18, 2019, at Sts. Peter & Paul Catholic Church, for Gene Martin Bacque, 82, who passed away peacefully on Saturday, September 14, 2019, in Lafayette, Louisiana, surrounded by his children, grandchildren and family.

Entombment will be held at Sts. Peter & Paul Mausoleum in Scott.

Father Gary Schexnayder, retired, will celebrate the funeral Mass and conduct the funeral services. Lectors will be his daughters Rita Bacque and Michelle Wilson. His grandchildren Hannah Broussard, Katherine Bacque, Ava Wilson, Jillian LeBlanc and Grant LeBlanc will serve as Gift Bearers. Musical selections for the services will be, "Notre Pere", "Amazing Grace", "Coeur de Jesu", "I Can Only Imagine" and "Make Me A Channel of your Peace".

He was preceded in death by his loving wife, Doris Ann Hruzek Bacque; his parents, Azema and Nameze Bacque; one brother, Jerry Bacque; and one nephew, Ken Bacque.

A native of Scott, Louisiana and resident of Lafayette, Louisiana since 1969, Mr. Bacque was a loving and generous husband, father, grandfather, great-grandfather, brother and friend to all who knew him. He graduated from Scott High School in 1955, then went on to receive his bachelor's degree in teaching from SLI (Southern Louisiana Institute) now known as ULL. Mr. Bacque had a great love of baseball and began his professional baseball career in 1957 playing for the Detroit Tigers Minor League system. From the AAA Pacific Coast League, he was given the opportunity to play professional baseball in Japan with the Hanshin Tigers of Osaka. His career in Japan lasted from 1962-1969. Hanshin won the pennant in 1962 and again in 1964, the year in which Gene won 29 games and lost 9 with an ERA of 1.89. From the 1964 pennant, he was awarded the Sawamura Award which is equivalent to the Cy Young Award in the United States. Mr. Bacque was a member of the Louisiana Cattlemen's Association and was a member and past president of the Lafayette Parish Cattlemen's Association. Most recently he was named as the Honorary Chairman of the Japan Retired Foreign Players Association in Tokyo, Japan. He was hoping to visit Japan and the Hanshin Tigers' Koshien Stadium once more in his lifetime, as he held the people, country and culture of Japan very close to his heart. He was a parishioner and usher of Holy Cross Catholic Church. He enjoyed traveling the world with his wife Ann, raising cattle, occasionally visiting the casinos and spending time with his children, grandchildren, great-grandchildren, cousins and friends. Mr. Bacque will be dearly missed by all who knew and loved him.

A Rosary will be recited by Gene's cousins, Fr. Rene Pellessier and Fr. Stephen Pellessier on Tuesday, September 17, at 6:00 p.m. in Martin and Castille's SCOTT Location.

Special thanks to his doctors and caregivers at The Heart Hospital, especially Dr. LaGraize and Dr. Hebert; nurses Adrian Wyatt, Elana Prejean, Elizabeth Rhinehart and Destiny Hypolite, who not only cared for our father, but also our family. We will be forever grateful.

View the obituary and guestbook online at www.mourning.com


Published by The Advertiser from Sep. 15 to Sep. 16, 2019.
To plant trees in memory, please visit the Sympathy Store.
MEMORIAL EVENTS
Sep
17
Visitation
10:00a.m. - 8:00p.m.
Martin & Castille Funeral Home Inc
802 Alfred St, Scott, LA
Sep
17
Rosary
6:00p.m.
Martin & Castille Funeral Home Inc
802 Alfred St, Scott, LA
Sep
18
Visitation
8:00a.m. - 1:00p.m.
LA
Sep
18
Mass of Christian Burial
1:00p.m.
Sts. Peter & Paul Catholic Church
LA
Funeral services provided by:
Martin & Castille Funeral Home Inc
MAKE A DONATION
MEMORIES & CONDOLENCES
Sponsored by Martin & Castille Funeral Home Inc.
4 Entries
My deepest condolences to all the Bacque family. All of you are in my thoughts.
Eve Dawkins Poll
Friend
September 27, 2019
After living such a fulfilling life, may Gene rest in his Father's kingdom. We hope that your sadness is overshadowed by the wonderful memories of Gene knowing that he lived a loving, giving, and enjoyable life.
G & Genie Duhon
Friend
September 17, 2019
My heart felt condolences to Gene's daughters and son along with his extended family and friends. He was a good man, had personality plus, and an unforgettable laugh.....he will be missed by all that knew him. Praying for healing hearts.
Paulette Richard Benoit
September 16, 2019