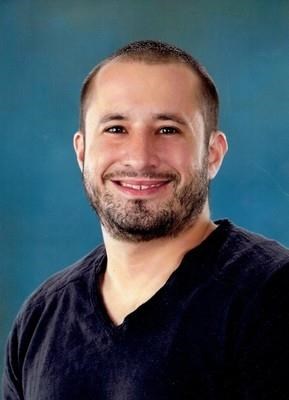 Lafayette, LA - On Tuesday, February 21st, the final curtain was drawn on the miraculous life of Ricky Stephen Briggs, Jr. when he left his earthly home to enter the gates of heaven. Grieving his passing yet celebrating his life are his devoted wife, Hannah Kerner Briggs, their precious twin boys, Sawyer St. Julien Briggs and Theodore "Teddy" Andrus Briggs, his parents, Ricky and Sonya Alleman Briggs, his mother-in-law, Suszanne Kerner, his sisters-in-law, Amy Kerner and Amanda Kerner, nephews, Dylan and Ethan, and niece, Sofia. He was adored beyond measure by his grandparents, George and Varnell Andrus Briggs and Dalfred and Joyce Monceaux Alleman. He is also survived by his Godparents George "Chip" Briggs and Rachael Alleman Kratzer, many uncles, aunts and cousins who supported him, laughed with him and followed him on his incredible journey. He was the proud godfather to Joshua Brodie Briggs and Jaxson Dominique Pierce.

He was preceded in death by his beloved sister, Amanda Claire Briggs with whom he shared a special bond growing up together with Cystic Fibrosis. He coached her through life and in her final moments until she was welcomed into the kingdom of heaven.

Ricky was born on May 15, 1981 in Lafayette, Louisiana. He attended St. Cecelia Catholic School in Broussard, Broadmoor Elementary, Edgar Martin Middle School, and St. Thomas More High School in Lafayette. He moved with his family to Tomball, Texas in 1997 and graduated from Tomball High School in 1999. He attended Tomball Junior College where he developed a passion for acting and comedy. He returned to Lafayette in 2001 where he attended the University of Louisiana at Lafayette and met his future wife while performing in "Correct Usage and Common Errors", a comedy produced by the College of the Performing Arts.

Ricky married his best friend and the love of his life, Hannah, in July of 2003, at their church, Community Christian Assembly in Sunset, LA. Both actors, the two enjoyed performing in SKIT HAPPENS, a sketch comedy troupe which they co-founded with dear friends and were long time members of Acting Up! (in Acadiana) where they co-starred in numerous productions. For nearly thirteen years, they worked with Summer Youth Shakespeare Ensemble. Ricky and Hannah looked forward to coaching young people who shared their love of Shakespeare and theatre. His life was spent with numerous hospitalizations and home medical care always with his wife at his side, particularly during the trying struggles prior to receiving a lifesaving double lung transplant. The couple were thrilled to welcome their two little miracles into the world in April of 2012. Ricky considered fatherhood his greatest accomplishment and was motivated daily by his boys to continue living his life to the fullest.

Ricky entertained audiences across the US on stage, in film and television. However, his true passion lied in stand-up comedy. Ricky's hilarious routines were focused largely on growing up with a chronic illness and making light of the challenges that he faced every day. His message of faith, determination and overcoming inspired nearly every one he came into contact with. Always an advocate for Cystic Fibrosis awareness, he became a motivational speaker promoting positivity especially to those suffering with CF. In 2016, he was humbled to not only receive an award for his amazing ability to persevere, but also to have the award named after him. The Ricky Briggs Fighting Spirit Award was presented to him by The Cystic Fibrosis Foundation and will be given every year to a different CF warrior who has shown strength in adversity.

Ricky's undeniable ability to make anyone laugh at anything was not only evident on stage but also to the many doctors and nurses who treated him throughout his life. He was so very grateful to receive such wonderful care from the following doctors and their staff: Brent Prather, Robert Beckerman, Marcia Katz, Tara Barto, Goutham Dronavalli, Amit Parulekar, and Benjamin Musher. The family would also like to acknowledge the ongoing commitment from the teams at Opelousas General, Tulane Medical Center, Lafayette General, Texas Children's Hospital, Houston Methodist Hospital, Kindred Hospital, Baylor St. Luke's Medical Center and Our Lady of Lourdes.

In lieu of flowers, the family kindly requests donations be sent in his memory to: The Cystic Fibrosis Foundation, Louisiana Chapter, Baton Rouge Regional Office, 10532 South Glenstone Place, Suite C, Baton Rouge, LA, 70810 or contributions be made in Ricky, Jr.'s memory for his children's pending trust fund to Iberia Bank.

Teddy and Sawyer, your Daddy's legacy lives on through you. He loved you "waaaay too much!"

Condolences may be made to www.mourning.com. Arrangements have been entrusted to Martin and Castille Funeral Home - SOUTHSIDE, Lafayette, LA, 70508, (337) 984-2811.


Published by The Advertiser on Feb. 26, 2017.
To plant trees in memory, please visit the Sympathy Store.
MEMORIAL EVENTS
Mar
1
Visitation
10:00a.m. - 2:00p.m.
Martin & Castille Funeral Home - Southside
600 E Farrel Rd, Lafayette, LA
Mar
1
Memorial service
2:30p.m.
The Bayou Church
2234 Kaliste Saloom Road, Lafayette, LA
Funeral services provided by:
Martin & Castille Funeral Home - Southside
MAKE A DONATION
MEMORIES & CONDOLENCES
Sponsored by Martin & Castille Funeral Home - Southside.
20 Entries
My dear and honorable friend!! I am just heartbroken to know that I will never get a funny text or hear your contagious laugh, again. I am so Grateful for the Amazing Friendship that you blessed me with. You will NEVER be Forgotten. Your legacy will live on through those two precious boys; I am certain Hannah will ensure it. To Hannah: There are just no words. I love you, sweet friend!
Mandy Shurley (West)
Friend
March 15, 2017
He was a very good father, husband, actor. He was also a very good friend. I am very glad I met him. Hannah, if you ever need help with Teddy and Sawyer, I would be gladly to help for free, and as a friend too.
Kate Lobdell
Friend
March 11, 2017
Condolences to family and friends. I spent many years photographing Ricky at camp. Was sad to hear the news.
Scott Riecke
March 2, 2017
My deepest condolences to you all. I wish I could have been there to hug in person. Ricky was (and will continue to be) an inspiration to us all as well as you, Hannah. The laughter and ways to deal with life shown through his actions and stand-up to our kids will live on. I don't think Annulyn will ever forget queuing up "The Lion King" on TV or recording Ricky and I chugging that disgusting colon cleanse together while you were in the hospital. All of my boys will recall his standup where he used comedy to affect change. They've all seen him and love him so. Prayers and blessings always.
March 1, 2017
Our deepest sympathies go out to you and your family. We pray that God comforts you and his angels always be there with the family during this time.
Chris & Mary Bush
March 1, 2017
I am so sorry for your loss. Your son sounds likes an amazing person whose memory will always be a bright light to those who knew him. Thoughts and prayers to you and your family.
Dara Meunier
Coworker
March 1, 2017
To the Briggs family,
I am very sorry to hear about Ricky, we hope that you all get through this sad time.
Sincerely,
Laura Gardner
March 1, 2017
We are sorry to hear about the passing of your dear son. We will keep him and your entire family in our thoughts and prayers.
George and Maggie Klein & Family
Friend
February 28, 2017
We are very sorry to hear about the passing of your dear son.
George & Maggie Klein & Family
February 28, 2017
To Hannah and family, My heart is saddened and my condolences to you all in this time of sorrow.
Deborah Simeral
February 28, 2017 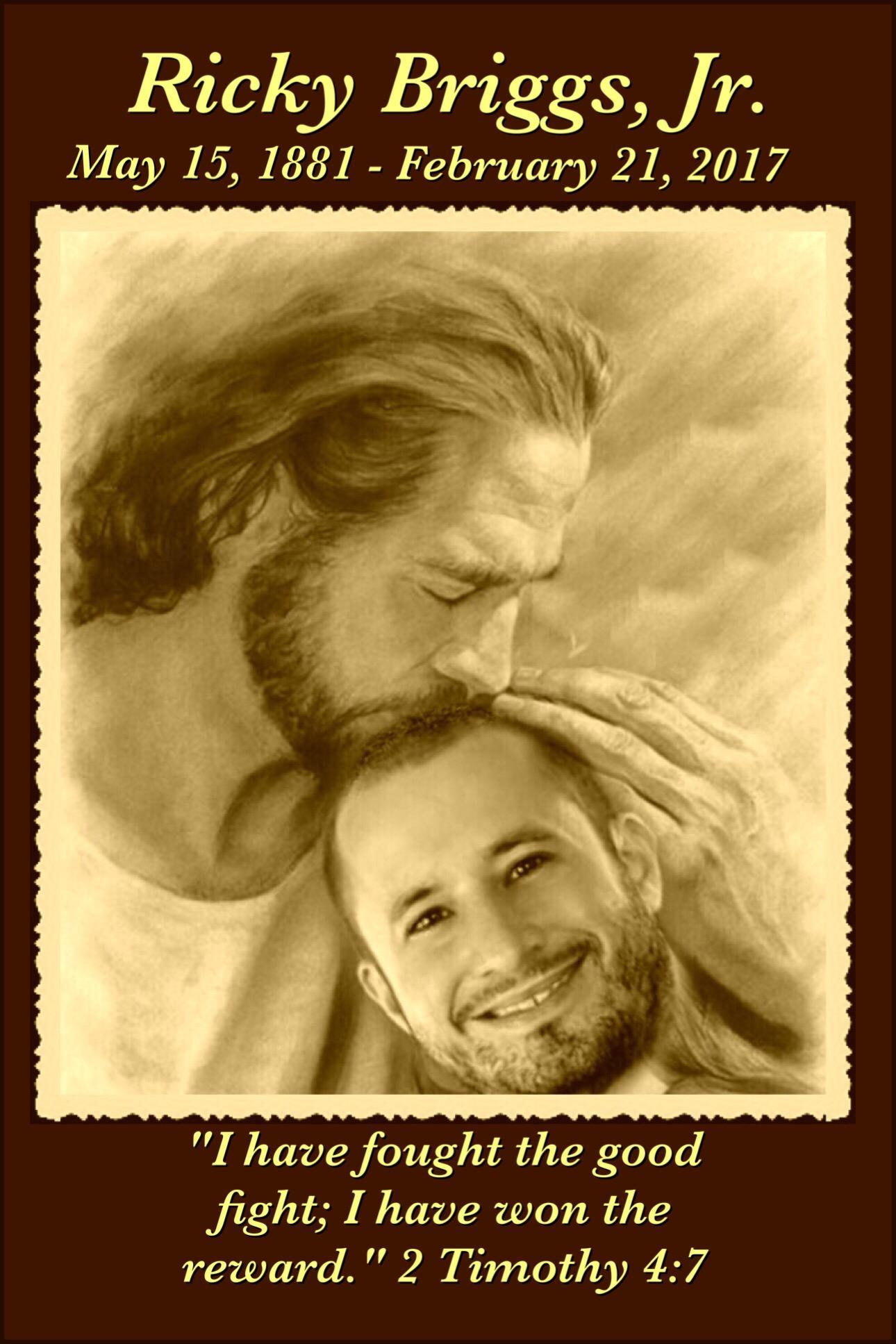 February 27, 2017
Mark Robin
February 27, 2017
My wife and I would take Ricky and Amanda for an afternoon, and infrequently for an evening, so Ricky and Sonya could have some time to themselves. I left Lafayette 27 years ago and still remember the the happy little Ricky and Amada and their wonderful spirits. We are saddened by the news. Our deepest sympathy to the friends and family.
Scott McNamara
Friend
February 27, 2017
I am deeply sorry for your family's loss. God bless your entire family.
Steven Thill
Coworker
February 27, 2017
May Ricky's sense of humor and courageous spirit keep a smile on your faces and in your hearts for a long time to come.
February 27, 2017
So sorry for your loss. My heart is just broken for the family, especially the kids. Thoughts and praises for you!
Renee' (Landry) Lathrop
Friend
February 24, 2017
Hannah, Lou and I were so sad to hear of Ricky's passing. We are praying for you and the boys. May the gift of their beautiful faces bring you comfort during this time. We are thinking of yall.
Katie Blair
February 24, 2017
Sonya, Ricky Sr, and the entire Alleman/Briggs family:

My sincere condolences go out to all of you at this sad time.
Little Rick is no longer suffering and he's is now with his little sister Amanda. What a great reunion that must be.

You will all be in my thoughts and prayers for a long time.

Sapha L. Richard and Jeremy Monceaux
Sapha Richard
Family Friend
February 23, 2017
Robyn Stuart
Friend
February 23, 2017
To Hannah, kids, and Immedimate family, Blessing to you all. What an awesome, all inspiring, and beautiful soul that has left our hearts and this open earth! This one will enter in paradise, free to the heavens. In this time I lost, I give you hope in eternity for I know he has a bigger mystery elsewhere for Sir Ricky Briggs! His love, passion, and humor will be miss but never forgotten! Peace and grace to you and eternal rest to him!
Brian Fournerat
Friend
February 23, 2017
Showing 1 - 20 of 20 results