BORN
1939
DIED
2021
ABOUT
Redemptorist High School
FUNERAL HOME
Rabenhorst Funeral Home & Crematory - Downtown
825 Government Street
Baton Rouge, LA
Frances Ann Pecora Cangelosi, 82, of Baton Rouge, died peacefully and comfortably Friday morning, March 19th, in her home while holding her daughter's hand. Frances died due to pancreatic cancer. She was born to Guy Pecora and Lena Pitslata Pecora on January 18, 1939, in Maringouin, Louisiana. She was reared and schooled in Baton Rouge, attending Dufrocq Elementary School, Redemptorist High School (1957 graduate), and LSU. She worked at Gulf States Utilities following high school. Frances met and married Robert Lawrence "Bob" Cangelosi, a man she declared was her love at first sight. They were married on September 9, 1961. They had four children, Robby, Colleen, Ricky, and Randy. Frances and Bob lived in Baton Rouge for 57 of their 60 years of marriage. Frances is preceded in death by her parents, Guy and Lena, her older sister Josephine who died before Frances was born, and her oldest child, Robert Lawrence "Robby" Cangelosi, Jr. She is survived by three children, Colleen Cangelosi Coffman (husband Tracy Coffman), Richard Guy "Ricky" Cangelosi (wife Nicole), and Randal Roe "Randy" Cangelosi (wife Korie). She is also survived by ten grandchildren and one great-grandchild, all of whom she would affectionately call by their number in birth order preceded by the salutation "Precious Number ...": Michael "Mac" Cangelosi (wife Kelsie), Chase Cangelosi, Blaine Coffman, Jonathan Cangelosi, Matthew Cangelosi, Clay Coffman, Catherine Cangelosi, Michael Cangelosi, Lyndie Coffman, and Patrick Cangelosi. Mac and Kelsie's daughter, Lily, started the next generation, currently the only great-grandchild with another on the way. Once Bob and Frances became empty-nesters in 1987, Frances became a Mary Kay Skin Care Consultant (and later, Director), a business she successfully and profitably owned and ran for 33 years. She was a devoted Catholic, a parishioner of Our Lady of Mercy Catholic Church. Frances had an affection for St. Joseph due to her Sicilian roots and her older sister's name Josephine, and notably Frances passed on St. Joseph's Day. Frances loved her family, her "Lunch Bunch" group, playing Dominoes with her friends, and LSU sports. Frances never showed any fear and her faith never wavered when given her grave pancreatic cancer diagnosis. The family wishes to thank Home Instead Senior Care and The Hospice of Baton Rouge for their excellent care, warmth, and professional services. Visitation will be at Rabenhorst Funeral Home East on Florida Blvd. on Wednesday, March 24th from 5:00 to 9:00 p.m. Funeral services will be at Our Lady of Mercy Catholic Church on Thursday, March 25th at 2:30 p.m., with burial thereafter at Roselawn Cemetery. Pallbearers will be her eight grandsons. In lieu of flowers, memorial donations may be made to The Hospice of Baton Rouge at www.hospicebr.com. We love you, Mom. Say "hello" to Robby and give him a hug for us.
Published by The Advocate from Mar. 20 to Mar. 21, 2021.
To plant trees in memory, please visit the Sympathy Store.
MEMORIAL EVENTS
Mar
24
Visitation
5:00p.m. - 9:00p.m.
Rabenhorst Funeral Home East
Florida Blvd., LA
Mar
25
Funeral service
2:30p.m.
Our Lady of Mercy Catholic Church
LA
Funeral services provided by:
Rabenhorst Funeral Home & Crematory - Downtown
MAKE A DONATION
MEMORIES & CONDOLENCES
11 Entries
May Almighty God hold Frances in the palm of His hand and may he bless all of Frances' family and friends always and in all ways. Our sincerest condolences and prayers go out to Bob and Ricky. She will be missed.
Frances M. & Dominic A. Cangelosi
Family
March 25, 2021
Bob, Colleen,Ricky and Randy,
Praying for all of you during this time of loss but God will send extra graces to endure .
We were neighbors on Abelia for three years when Lloyd was getting his PHD in Accounting at LSU and y’all werervstudents at St Aloysius.
We had some great times and still see Michael, John and Brian Giddens.

Judy Petrie sent me the picture of Frances .


Ricky and Randy,
Judy Petrie just informed me anout Frances passing.
Just remembering the 3 years we spent on Abelia Drive as neighbors and y’all went to St Aloysius together.
She was a great neighbor and friend.
Praying for the family during this time of loss.
We do see the Giddens boys, Michael and John.
Ricky I did see you at the DNew Orleans Dental Conference years ago when I was helping for the conference.

Marilyn, Lloyd, Karen Kim, Kathryn and Karol Brandt
Marilyn Brandt
Friend
March 23, 2021
Frances was one of the sweetest, loveliest, considerate ladies we have ever had the pleasure of knowing. She was also very brave. It was our privilege to raise our children as friends of Frances' and Bob's children. She will be missed, but always remembered. Our deep Love to the Family. Ann and John Schwab
Ann and John Schwab
Friend
March 23, 2021
What a beautiful, sweet and classy lady. I always enjoyed our lunch visits
when a few of us would get together from the office. You gave me many wonderful gifts when I worked for Bob. It will always be reminders of you and the cherished memories of our visits and conversations. Heaven gained another beautiful angel and you will be missed by so many. To Bob, Dr. Ricky and the family, you are all in my prayers.
Pattie Pipes
Friend
March 23, 2021
Bob, we are thinking of you during this very difficult and sorrowful time and will keep you in our prayers. We know you have a wonderful family who will surround you with their love. May your memories of Frances and your many years together give you solace, knowing she's now at peace.
Yvonne (Deasy) and David Gowdey
Family
March 22, 2021
Randy, my deepest sympathies to you & your family. The loss of a parent is deep..I understand. May God comfort you and yours in that you have an angel guiding you all now. Dee
Dee Pisani Murphy
Friend
March 22, 2021
Frances was in my graduating class of 1957 from Redemptorist High School. I am so sorry Frances died of such a terrible cancer. She told me of her son’s death. Frances married Bob Cangelosi who was a classmate of my husband at Catholic High. Frances was a sweet, caring person.
Peggy Duffel Simmons
Friend
March 22, 2021 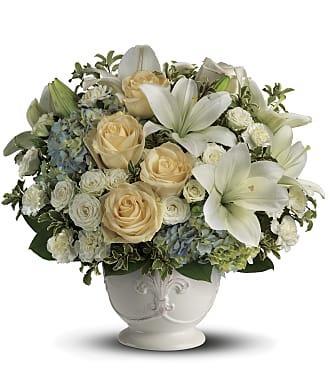 Scott and Dana LeBlanc
March 22, 2021
How I will miss you. A sister I never had . You always loved me and cared about me, consoled me and directed some decisions in my life. We talked all the time and until the Covid we saw each other a lot. It was fun to share life with you. You did a lot for me when I had cancer. I never will forget it. You mean a lot to me and I love you to the moon and back. Looking for you to visit me in my dreams. Kiss momma and daddy for me. Love you. One day we will be together again. Mary Frances.
Mary Frances Cambre
Family
March 21, 2021
We were saddened to learn of Frances’ passing. We have fond memories of being neighbors on Abelia many years ago. Our deepest sympathy to her family.
Jean and Bob Eisenbach
Neighbor
March 21, 2021
Showing 1 - 11 of 11 results