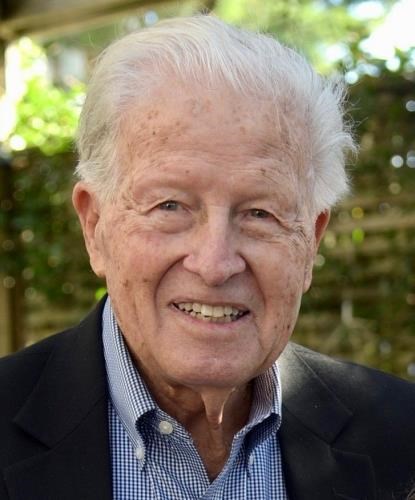 Jack was born on Oct. 18, 1928, in Mineola, New York, to Edward and Katherine Ryder. He spent his formative years on the family farm in New York and was a competitive bowler, ranked in New York. He then attended the University of Virginia and Officer Candidate School (OCS) for the Navy. He played baseball and basketball at UVA and was drafted by the farm club for the New York Giants. While at UVA, he was introduced to Jackie King, a student at Madison College, whom he married on April 17, 1954, and remained married to for 67 years. In short order, they had their "boys," Michael, Craig and Tom Ryder.

Jack was a Captain in the Navy and the coach of the Navy baseball team. Jack and Jackie lived in Portsmouth, Virginia, for many years, where he taught school and coached varsity men's basketball at Wilson High School, was the assistant principal for Harry Hunt Junior High School and eventually became the principal at Churchland High School, where he was a mentor for numerous young adults. After leaving Churchland, Jack went into administration as an assistant superintendent and superintendent.

After retiring in the 1990s, he and Jackie spent their time with family and friends and traveled the world. They eventually settled in St. Simons Island, Georgia, with their multitude of friends and were active members in the Wesley United Methodist Church community. Jack was an avid golfer and tennis player until his health prohibited him from doing so. Jack and Jackie frequently traveled to the Outer Banks, North Carolina, to be with family.

He was a kind soul who cared deeply for his friends and family. He is survived by his sons, Michael (Lori), Craig (Tracy) and Thomas (Deanne); his grandchildren Christian, Erin (Jamie), Michelle, Winston, Katie (Spencer), Kyle, Jacob, Naomi and Gavin; his great-grandchildren Connelly, Mason Lee, Killian and Palmer; his sister-in-law Joanne King Rodgers; and many nieces and nephews. He was preceded in death by his wife, Jacqueline King Ryder; his parents, Edward and Katherine Ryder; his brother, Edward Ryder; and his daughter-in-law, Karen Hope Ryder.

In lieu of flowers, the family asks that donations to the American Cancer Society be made in Jack's name.

Published by The Brunswick News on Sep. 21, 2021.
To plant trees in memory, please visit the Sympathy Store.
MEMORIAL EVENTS
Oct
9
Graveside service
11:00a.m.
Meadowbrook Memorial Gardens
4569 Shoulders Hill Road, Suffolk, VA
Funeral services provided by:
Meadowbrook Memorial Gardens
MAKE A DONATION
Please consider a donation as requested by the family.
MEMORIES & CONDOLENCES
Sponsored by Meadowbrook Memorial Gardens.
1 Entry
Jack was such a kind man. I loved both of them. At church when we had communion he would always pat me on the back as he passed behind us. He will be greatly missed at Wesley UMC along with his dear wife, Jackie.
Brenda Reynolds-Battles
Friend
September 21, 2021
Showing 1 - 1 of 1 results