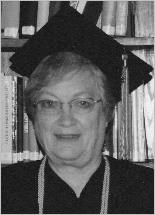 She is preceded in death by her husband of 61 years, Bob, and their son Rick.

She was born July 23, 1934 near Middleburg, VA. Spent much of her life in Wilmington, DE, and spent her later years in Central AR.

She donated her body to the Genesis Program of Memphis Methodist Hospital.

In lieu of flowers, the family request donations be made to Conway First United Methodist Church, 1610 Prince St, Conway, AR 72032.

Published by Log Cabin Democrat on Dec. 1, 2021.
To plant trees in memory, please visit the Sympathy Store.
MEMORIAL EVENTS
To offer your sympathy during this difficult time, you can now have memorial trees planted in a National Forest in memory of your loved one.
MAKE A DONATION
MEMORIES & CONDOLENCES
Sponsored by TheCabin.net.
0 Entries
Be the first to post a memory or condolences.