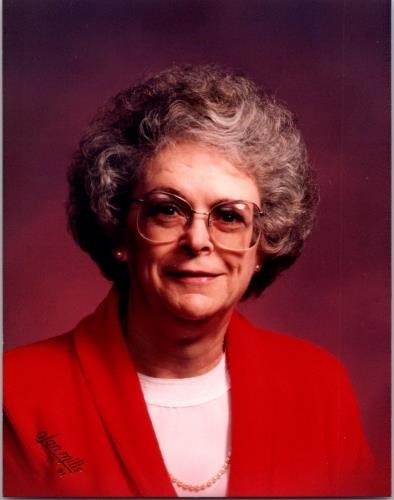 Marilyn Wilder Nash, 85, joined our Savior on Sunday, Oct. 31, from her home in Jacksonville, AR.

Born Marilyn Lynelle Wilder in Graysonia, AR, she was a graduate of Henderson State Teachers College in Arkadelphia, AR. She married fellow student Tom P. Nash Jr. in 1956, and the two lived in California, Kansas, Oklahoma, Texas, and Germany during his service with the US Army, before settling in Jacksonville. Marilyn and Tom were members of the Christian Church of Jacksonville, where Marilyn served as treasurer for many years.

While raising her four sons, Marilyn also worked at McKimmey Associates, Realtors. Her family and friends held dear her warmth and wisdom, her devotion to those in need, her beautiful quilts, and her soft chuckle.

She was preceded in death by her parents, Charles Hampton and Laura Cornelia Wilder; two brothers and two sisters; her husband of 55 years, Tom P. Nash Jr.; and son Brian Thomas Nash.

Visitation for family and friends will be held Monday November 8th, 6-8 pm at Griffin Leggett Rest Hills Funeral Home, 7724 Landers Rd., North Little Rock, where funeral services will be Tuesday 11 am. Burial will follow in Rest Hills Memorial Park, North Little Rock. Flowers are welcome, or memorial contributions may be sent to the Christian charity of your choice.

Published by Log Cabin Democrat on Nov. 5, 2021.
To plant trees in memory, please visit the Sympathy Store.
MEMORIAL EVENTS
Nov
8
Visitation
6:00p.m. - 8:00p.m.
Griffin Leggett – Rest Hills Funeral Home and Memorial Park
7724 Landers Road, North Little Rock, AR
Nov
9
Funeral service
11:00a.m.
Griffin Leggett – Rest Hills Funeral Home and Memorial Park
7724 Landers Road, North Little Rock, AR
Funeral services provided by:
Griffin Leggett – Rest Hills Funeral Home and Memorial Park
MAKE A DONATION
Please consider a donation as requested by the family.
MEMORIES & CONDOLENCES
Sponsored by TheCabin.net.
2 Entries
If there was ever an "angel on earth" it was "Mom Marilyn". She was not only a perfect Life partner for Tom, but also such a wonderful mother to her children. Thankfully for many of us, she shared her motherly love & caring with many more. I was so very blessed to be one of her "extra" children (Keith you probably remember how I´d call her "our mom" & you my brother!). She was, without a doubt, the very best example of how we should all strive to live our lives. Her patience, compassion, honesty, integrity, & sense of humor (just watching her laugh & shake always made me laugh; I couldn´t tell sometimes if she was crying cuz´ she would shake so hard!) were just a few of her many attributes. You always knew she loved you, no matter what. Life here on earth has been so, so blessed for those whose lives she touched, and she touched so many. How proud you kids, grandkids & great grandkids must be of how she lived her life & how much she loved you all. I know how very, very proud she was of her precious family. May God hold you all close & wrap his arms around you to comfort you. We all celebrate her well lived, victorious life and rejoice she is where there is no longer any pain or sickness. God bless you all. Prayers for you Susie & Joe Peceny & Shannon & Shelly
Joe & Susie Peceny
November 7, 2021
Offering our deepest condolences during this difficult time.
Staff of Griffin Leggett Rest Hills Funeral Home & Memorial Park
November 5, 2021
Showing 1 - 2 of 2 results