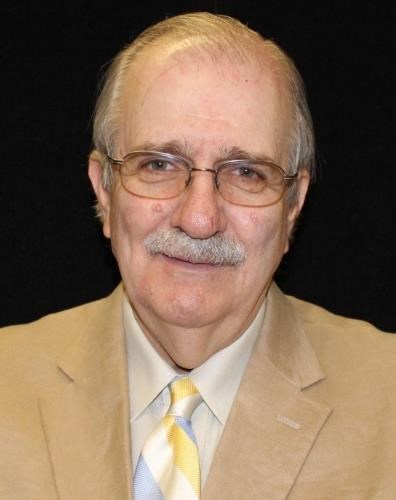 Robert graduated from Batesville High School in 1963 and Arkansas College (now Lyon College) in 1967, where he was student body president. He began working for the Arkansas Assessment Coordination Department and taught high school in Sheridan, Arkansas, and Bernie, Missouri. He then went on to work for the White River Housing Authority and Century 21. Robert, then began a reappraisal company, Mitchum, Thompson, and Belon. In the 1980s he began his career with ASU Beebe where he stayed for the next 30 years. He was the chair of the Business and Agriculture Department and helped start the Vet Tech Program.

When Robert retired from ASU, he became the Recorder/Treasurer for the City of Salem. He also wrote for the Areawide Media, covering sports. Sports were his passion, especially watching his daughter Sidney play basketball.

Robert had a Bachelor of Arts with a Major in Business at Arkansas College and an MBA at the University of Central Arkansas in Conway. He was a member of the White River Housing Development, the Batesville Jaycees, and the Little Rock Chamber of Commerce. Robert was passionate about music, sporting events, his girls and grandson, Trace.

He is survived by his wife, Fran (Welch) Mitchum of the home; his daughters, Casey Mitchum and Sidney Mitchum (Clayton Everett) all of Salem, Arkansas; sister-in-law, Jimmie Ann Mitchum and niece Lynne Mitchum Teague of Batesville; grandson, Trace and honorary grandchildren, Tripp Martin and Ella Martin. He is preceded in death by his parents (James and Geraldine Mitchum) and brother (Jim "Fireball" Mitchum).

Published by Log Cabin Democrat on Nov. 30, 2021.
To plant trees in memory, please visit the Sympathy Store.
MEMORIAL EVENTS
To offer your sympathy during this difficult time, you can now have memorial trees planted in a National Forest in memory of your loved one.
Funeral services provided by:
Barker Funeral Home - Salem
MAKE A DONATION
MEMORIES & CONDOLENCES
Sponsored by TheCabin.net.
4 Entries
Mr. Mitchum was always so kind to me. I am thankful for his support during my time as ASU Beebe, and for his help continuing my education into Graduate School. He wrote a wonderful letter of recommendation at my request, and I will never forget that. Casey, Sidney, Fran, my heart is with you. I wish I could have ran into him one more time at Kroger!
Brad Clay
Friend
December 6, 2021
Always the gentleman. Always one of the 'good guys'. He'll be missed by many.
Henny Beel
December 3, 2021
I just saw this and I am so sad! Bob and I go a way back and we share many good times and conversations. He and Fireball were great family friends and I hate I didn´t stay in closer touch later in life. Condolences to all his family!!
Charlie Morris
Friend
December 2, 2021
My thoughts and prayers are with you all. Bob was always had a positive attitude and so kind.
Penny Rose
December 1, 2021
Showing 1 - 4 of 4 results