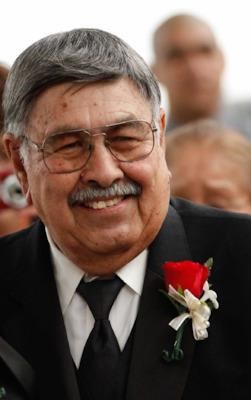 Salinas - Enrique 'Henry' Fernandez Sias, 84, of Salinas, CA passed away peacefully from natural causes on December 9th with his loving family by his side.

Henry was born December 31st, 1935 in Globe, AZ to the late Vincente Sias and Prisciliana Fernandez Sias. He attended Gonzales High School and graduated in 1954. He later joined the Army National Guard and served his country for six years. He worked as a supervisor for Mann Packing for 27 years and was the cactus pear supervisor at D'Arrigo Brothers for over 27 years until he retired.

Henry enjoyed going on road trips, fishing, camping, live music, and going to car shows. He was a lifelong fan of the San Francisco 49ers and San Francisco Giants. In his retirement, he enjoyed spending time with his two dogs (Sadie and Teddy) and watching tv shows about Alaska, Ghost Adventures, Naked and Afraid, and WWE. He also enjoyed spending the time he could with his granddaughter Anabella.

He is survived by his wife Ana Rosa Sias (Alvarez) and their two children Daniela (Kevin) Towne of Chula Vista, Roxanne Sias of Salinas; his first wife Carmen and their two children Sandra Sias of Salinas, and Nancy Patrick of Beaverton, Oregon; his grandchildren, Sabrina, Amber, Remy, Brittany, Celina, Mykel, Anabella; and his great grandchildren Elijah, Jodie, Liam, and Damien; his brother Gilbert (Margaret) Sias of San Jose; and many nieces and nephews.

He was preceded in death by his brother Vincent Sias, his sister Rose Molina, and his daughter Yvonne Villegas.


Published by The Salinas Californian from Dec. 17, 2020 to Jun. 12, 2021.
To plant trees in memory, please visit our Sympathy Store.
MEMORIAL EVENTS
To offer your sympathy during this difficult time, you can now have memorial trees planted in a National Forest in memory of your loved one.
MAKE A DONATION
MEMORIES & CONDOLENCES
0 Entries
Be the first to post a memory or condolences.