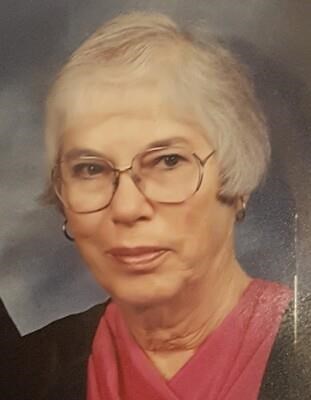 Joann McKay passed away on June 27, 2020 from complications following a stroke suffered a few days earlier. She was just two days short of her 93rd birthday. A resident of Salinas since 1963, Joann lived her final 15 months at Songbird Care Home.

Joann was born June 29, 1927 in Klipsan Beach, Washington to Lilian (Johnson) and Arthur McCarthy, also joining older sister Jane. She graduated from Ilwaco High School and moved to Portland, Oregon several years later. She worked at Pacific Northwest Bell Telephone Company. It was in Portland that Joann met George McKay in the young adult group at Trinity Episcopal Church. She and George were married on September 10, 1955 at Trinity, and were together for nearly 63 years, until George's passing on June 9, 2018.

After moving to Salinas with George and son Andy, Joann attended Hartnell College, graduating in 1966. She was a bookkeeper at Madonna Manor (now Madonna Gardens) from 1975 through the early 1990's. She was a longtime member of St. Paul's/ San Pablo Episcopal Church and sang in the choir for many years. Joann was involved with many cultural groups in Salinas, including Salinas Performing Arts, Salinas Community Concert Association, Friends of Music, was a docent at the National Steinbeck Center, and belonged to the Same Page Book Club.

Joann was always a loving and supportive wife and mom, attending numerous concerts, swim meets, water polo and baseball games over the years. She loved classical music and opera, going to Opera San Jose, and enjoying the Friday noon organ concerts at St. Paul's. She played in several bridge clubs, making many dear friends over the years. Joann was always looking forward to her next trip or cruise and visited every continent except Antarctica during her lifetime. Joann was a great cook who loved trying her new creations on George and Andy. Her favorite area restaurant was Passionfish in Pacific Grove. She always enjoyed celebrating special occasions with great food, drink, and company.

Joann is survived by her son Andy, several younger generations of cousins in Oregon, and from George's side, a sister-in-law, 5 nephews, 2 nieces, 4 great-nieces, and 2 great-nephews. She was pre-deceased by her husband George, sister Jane, her parents, and her 2 first cousins.

Special thanks to the Mazerik family and the staff at Songbird, Heartland Hospice, Halo Home Health Care, Sand Negret, Shirley Kiatta, and the comfort care unit at Salinas Valley Memorial Hospital. Andy is also grateful for all the love, support, and prayers for Joann.

A celebration of Joann's life will take place at St. Paul's/ San Pablo Church at 12:00 noon on July 16, 2021. A private interment ceremony has been held at the St. Paul's/San Pablo Columbarium.

In lieu of flowers, please donate in Joann's name to the charity of your choice.

Arrangements are by Struve and Laporte funeral home.


Published by The Salinas Californian from Jun. 25 to Jun. 30, 2021.
To plant trees in memory, please visit the Sympathy Store.
MEMORIAL EVENTS
Jul
16
Celebration of Life
12:00p.m.
St. Paul's/ San Pablo Church
CA
Funeral services provided by:
Struve and Laporte Funeral Chapel
MAKE A DONATION
Please consider a donation as requested by the family.
MEMORIES & CONDOLENCES
Sponsored by Struve and Laporte Funeral Chapel.
0 Entries
Be the first to post a memory or condolences.