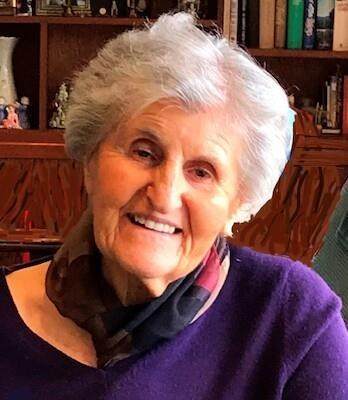 Salinas - Our beloved Mother, Grandmother and Great Grandmother Lina Pesce, passed away peacefully at her home in Salinas at the age of 100 on June 12, 2021. She was born Lina Pezzini March 8, 1921 in Rasura, Sondrio, Italy, a village in the Valtellina Valley in the Italian Alps to Giuseppe and Assunta Pezzini. She came to America with her family at the age of nine, settling in Carmel where her father was a partner in an artichoke farming operation. Lina and her two siblings Angelo and Eny attended the one room Bay School on Highway 1 in Carmel. It was in Carmel where she met Carlo Pesce who became her husband in 1941.

In 1945 she and Carlo moved to Castroville where they farmed artichokes with Lina's father and her brother Angelo Pezzini when he returned from World War II. Then after farming for 40 years they retired in 1981 and Mom and Dad made their home in Salinas. Lina loved her home and took such delight in her flower garden and cooking wonderful Italian favorites for family gatherings and friends. She lived a life of devotion, love and compassion.

She was preceded in death by her parents, husband Carlo Pesce, brother ,Angelo Pezzini and sister Eny Pezzini. The family would like to thank the wonderful caregiving team of Ileini, Pinga, Lio, Sue, and Emelyn for their loving care over the past several years in addition to Hospice of the Central Coast and to Jessie for her loving care of Mom's home and garden.

A private family service will be held. Memorial contributions can be made in her memory to a charity of the donor's choice.

Published by The Salinas Californian from Jun. 21 to Jun. 23, 2021.
To plant trees in memory, please visit the Sympathy Store.
MEMORIAL EVENTS
To offer your sympathy during this difficult time, you can now have memorial trees planted in a National Forest in memory of your loved one.
Funeral services provided by:
Struve and Laporte Funeral Chapel
MAKE A DONATION
Please consider a donation as requested by the family.
MEMORIES & CONDOLENCES
Sponsored by Struve and Laporte Funeral Chapel.
1 Entry
So sorry to read about your mother Ida With your support from Dennis, Susan and Greasy Bob your pain will be eased
Dean Gilbery
June 22, 2021
Showing 1 - 1 of 1 results