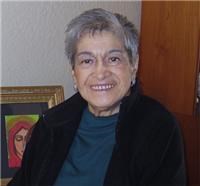 BORN
1935
DIED
2021
FUNERAL HOME
Baca's Funeral Chapels
300 East Boutz
Las Cruces, NM
Bernice Lopez Waddington passed away August 23, 2021, in Las Cruces, New Mexico.
Bernice was born January 18, 1935, to Ramona Padilla Lopez and Jose Elfido Lopez. She is a descendant of settlers of New Mexico who moved to the Purgatoire River Valley, Colorado Territory in the 1860s. Her great-great-grandparents were founders of Cordova Plaza west of Trinidad. She was raised on her parents' farm near Segundo and attended Sarcillo grade school, which was founded in 1876 by her great-grandfather, Norberto Cordova. She graduated from Primero High School. After graduation, her work at Moses Department Store in Trinidad honed her love of fashion and fabrics.
In 1962, Bernice enlisted in the U.S. Army, where she embarked on her future profession as a dental hygienist. She rose quickly to Sergeant First Class, made lifelong friends, and met her fiancé, Sergeant First Class Bill Breeden, who was killed in the Vietnam War. Upon leaving the Army in 1967, she moved to Denver and began a long career with Cody Dental Group, where her engaging smile, professionalism, and concern for patients earned enduring friendships and the respect of all whom she encountered.
She met Walt Waddington, a fun-loving, adventurous gentleman whom she married in 1969. Together they delighted in a life replete with gatherings of family and friends, fine dining, dancing, service to church, and world travel. At their retirement, they moved to Javea, Spain, where their open hearts and generous spirits endeared them to their Spanish neighbors.
In 1986, they returned to the U.S. and moved to the warmer climes of Las Cruces, New Mexico, where they cherished their neighbors and friends. Throughout her retirement, Bernice remained a student of genealogy, politics, art, and fashion design. She read extensively, took classes at New Mexico State University, and maintained close relations with far-flung family and friends.
Bernice was preceded in death by her parents; husband Walt; siblings Corrine Griego (Nick, dec.), Filbert Martin (Lupe, dec.), Albina Esparza (Otto, dec.), Elsie Hammontree (Chuck, dec.), Joseph Lopez (Belle, dec.), John Lopez, Felix Lopez, and Leroy Lopez. She is survived by Walt's son Michael Waddington and grandson Vincent Waddington of England; sisters Mary Siegele (George, dec.) of Illinois and Sylvia Jeppson (Neal, dec.) of California; sisters-in-law Janis Davis Lopez of Colorado and Pat Lopez of New Mexico; and a host of loving nieces, nephews, godchildren, and friends.
All who knew Bernice will miss her sense of humor, spontaneous singing, lively intelligence, and loving heart.
Bernice's family will plan a gathering at a future time. For online condolences please logon to www.bacasfuneralchapelslascruces.com.
Published by The Chronicle-News on Oct. 15, 2021.
To plant trees in memory, please visit the Sympathy Store.
MEMORIAL EVENTS
To offer your sympathy during this difficult time, you can now have memorial trees planted in a National Forest in memory of your loved one.
Funeral services provided by:
Baca's Funeral Chapels
MAKE A DONATION
MEMORIES & CONDOLENCES
Sponsored by Baca's Funeral Chapels.
0 Entries
Be the first to post a memory or condolences.