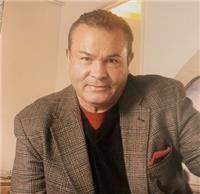 BORN
1963
DIED
2021
FUNERAL HOME
Comi Funeral Home - Trinidad
1804 E Main
Trinidad, CO
Jason A. Perri died September 22, 2021 due to COVID complications.
Jason had accepted the Lord and was a follower of His Word. No matter what's happened in Jason's life, we are entrusted in knowing he went with Jesus.
Jason was a drafting designer, who began his career in Denver, CO. This job allowed him to travel to Florida, Washington and Alaska. He's designed plans on the Alaska Pipeline and the Allen Mine, as well as other areas. He was very good at his profession and was sought after. He enjoyed this work immensely.
Jason was a very kind and gentle soul who was always happy and always had a joke to tell. He would be remembered for his goofy laugh and his amazing talent for art. He loved to cook and entertain friends and family. He always had a story to tell and share. He was a good son and brother.
Jason had many good friends, especially Dave Montoya, and made special memories with each of them. He left each of them with a fond and special place in their hearts for him. They will miss him terribly. He never met a stranger and instantly made friends with people he didn't know. He was a jokester who enjoyed making people laugh and smile.
Jason was an outstanding athlete and was known for his dedication to whatever sport he played and has claimed many awards. He and his friends would often reminisce about this game or that game, always smiling and saying they were the toughest around, always with that wink and smile.
Jason lived in Las Vegas, NV for the past 20 years, but always came home for a visit, where he'd look up old friends and have a good time.
His daughter, Alissa was the light of his eyes. She was a very special person who meant the world to Jason and he loved her very much. She was his "twin" and she carries a lot of his traits. He would write her letters with such beautiful art and decorative scenes. Mom saved all of them and we have a treasure trove.
Jason was born January 13, 1963 to James and Nora Perri. He was the baby of the family and the little brother to all.
He is preceded in death by his father, James Perri and his brother, Thomas Perri.
He is survived by his loving mother, Nora Perri; his sister, Noreen Perri; and brothers, Jim Romero (Michelle), and James Perri (Debra Cordova); daughters, Alissa Perri (Isaiah), Eulaila Marie Cecava (Andy); his nieces and nephews, Rochelle Perri Pitchall (Ryan), James Perri Jr., Derek Perri (Michelle Maucione), Leandra Perri (Andrew Gill); great nieces and nephews, Arianna, Julia, Brie, Delilah, Logan, Drew; special friends, Desi Davidson (John) and Caitlyn Howard (Alec) Kylee, Johnny, Collin, Daron and Bennett. He is also survived by his special aunt Mary, cousins Ruth and Linsey, and many other relatives and a numerous amount of friends.
Funeral will be held at Comi Funeral Home on November 5th, 2021 at 10:00am with Brother Harry officiating. Burial will be held at Masonic Cemetery immediately after the service. We ask that all who remember Jason, bow your heads and say a prayer and keep his great memory alive. He will be missed dearly but never forgotten.
Arrangements made under the direction of the Comi Funeral Home.
Published by The Chronicle-News on Nov. 1, 2021.
To plant trees in memory, please visit the Sympathy Store.
MEMORIAL EVENTS
Nov
5
Funeral
10:00a.m.
Comi Funeral Home - Trinidad
1804 E Main, Trinidad, CO
Nov
5
Burial
Trinidad Masonic Cemetery
end of Nevada Ave., Trinidad, CO
Funeral services provided by:
Comi Funeral Home - Trinidad
MAKE A DONATION
MEMORIES & CONDOLENCES
Sponsored by Comi Funeral Home - Trinidad.
6 Entries
So sorry for your loss Noreen!
Terri Griego
Friend
November 5, 2021
My thoughts and prayers go out to Jason and his family as I remember playing little league baseball with him in T´dad. We had so much fun during those enjoyable and less stressful Summers. Rest in Peace
Charley Lochard
Friend
November 5, 2021
So sorry to hear about Jason Such a sweet guy and had many fun times years ago hanging out and dancing. Always smiling and I will always have special memories of him Condolences to the family
Ursula Velarde
Friend
November 2, 2021
Sincerest condolences for the loss of Jason. He was a good guy and had a great laugh. God bless and prayers to the family.
Ed Cappellucci
Friend
November 1, 2021
My sincere condolences go out to Nora, Noreen and family, may Gods love and blessings be with you all.´
John Martinez RN
November 1, 2021
I wish to extend my condolences to you for your loss. May the peace of God be with you and may he comfort you during this most difficult time.
ZS
Other
October 29, 2021
Showing 1 - 6 of 6 results