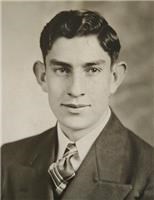 BORN
1923
DIED
2021
Leroy Luis Vallejos, 98, of Wheatridge, CO passed away on October 19, 2021, in Wheatridge, CO.
Lee was born in Vigil, CO to Miguel A. Vallejos and Eralia Vigil Vallejos on March 11, 1923. He attended elementary and high school in Trinidad, CO, and completed 2 years at Trinidad Junior College.
During World War II, he was stationed at Hill Field in Ogden, Utah, a maintenance and supply base, where he replaced engines on battle worn airplanes. Following this stint, he returned to the San Luis valley where he worked as a rancher, until an appendicitis attack forced a less strenuous occupation. He retired from Denver Equipment Company after 30 years' service.
He was a member of St. Dominic Catholic Church, Denver, and active in the Holy Name Society. He was a member of the Genealogical Society of Hispano America (Trinidad chapter).
Lee was preceded in death by his wife Susie and his second wife Bettylou, his daughter Teresa, and brothers Robert and Donald. He is survived by his 15 children, 14 grandchildren, 11 great grandchildren, nieces and nephews, and his beloved cousins Elouise and Frank Montijo.
Funeral services and internment were held at Mt. Olivet Cemetery.
Published by The Chronicle-News on Oct. 25, 2021.
To plant trees in memory, please visit the Sympathy Store.
MEMORIAL EVENTS
To offer your sympathy during this difficult time, you can now have memorial trees planted in a National Forest in memory of your loved one.
MAKE A DONATION
MEMORIES & CONDOLENCES
0 Entries
Be the first to post a memory or condolences.