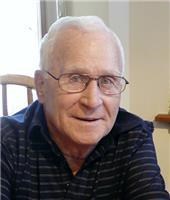 BORN
1926
DIED
2021
FUNERAL HOME
Comi Funeral Home - Trinidad
1804 E Main
Trinidad, CO
Weston O. Thomas, age 95, died Wednesday, October 20, 2021 at his home. He was born on May 11, 1926 in Trinidad, CO to John W. Thomas and Alice McIntosh.
He served in the US Navy from May 11, 1943 - May 10, 1947. He returned to Trinidad where he met his wife, Antoinette Martorano. They were married on February 18, 1950. He worked at the C&W Railroad as a Brakeman for 31 years, and retired on March 1, 1984.
He was an avid hunter and fisherman. He also enjoyed woodworking and watching football and baseball, along with other sports.
In 2006, he moved to Colorado Springs to be closer to family. He was especially close to his daughter, grandchildren and great grandchildren. His wife Antoinette, of 57 years, preceded him in death in 2007.
He is survived by his daughter Diana, (Wayne) Miller; his grandchildren, Brian (Brittany) Miller and their 3 kids, Kayla, Weston and Brenen; Sheri (Dusty) Mehsling and their 3 children, Caden, Austin and Savannah; his brother Donald (Jane) Thomas; brother-in-law Charles (Mary Rose) Martorano; and numerous nieces and nephews.
He was preceded in death by his brother, Walter (Martha) Thomas; sister, Velma (Del) Daugherty; sister, Veora (Robert) Hunter; and brother, Norman (Shirley) Thomas.
A memorial will be held on Thursday, November 4, 2021, at Comi Funeral Home at 1:00 PM.
In lieu of flowers, contributions can be made to your favorite charity. A special "Thank You" to Debra Gumlich for all her help and support.
Arrangements made under the direction of the Comi Funeral Home.
Published by The Chronicle-News on Nov. 1, 2021.
To plant trees in memory, please visit the Sympathy Store.
MEMORIAL EVENTS
Nov
4
Memorial service
1:00p.m.
Comi Funeral Home - Trinidad
1804 E Main, Trinidad, CO
Funeral services provided by:
Comi Funeral Home - Trinidad
MAKE A DONATION
Please consider a donation as requested by the family.
MEMORIES & CONDOLENCES
Sponsored by Comi Funeral Home - Trinidad.
1 Entry
Condolences to Diana and family. I'll miss my uncle's broad smile, hearty laugh, and wry sense of humor.
Tom Hunter
Family
November 1, 2021
Showing 1 - 1 of 1 results