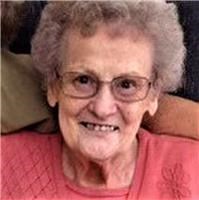 She was born on January 15, 1928, to the late John and Adah (McMasters) Love in Jefferson County, PA.

Alice loved her family, and her home was widely considered "home base" for countless family gatherings. Alice's Christian faith was very important to her and she was a member of the Evangelical United Methodist Church in Brookville, PA, for her entire adult life. She also enjoyed traveling and reading.

In addition to her husbands and parents, she was preceded in passing by one brother, Elmer Love; and three sisters: Jeane Showalter, Margaret Bailey and Elsie Smith.

Services will be held privately by the family and will be broadcast on Tuesday, January 26, 2021, beginning at 2 p.m. and officiated by her son, Pastor Larry Reitz.

Memorial contributions may be made in her name to the Evangelical United Methodist Church, 30 S. White St., Brookville, PA 15825.

Online condolences and other information may be found at www.mckinneydargy.com.

A live broadcast of the service may be viewed by selecting the button below her obituary on www.mckinneydargy.com or by entering http://webcast.funeralvue.com/events/viewer/46040 into the browser.
Published by The Courier Express on Jan. 22, 2021.
To plant trees in memory, please visit our Sympathy Store.
MEMORIAL EVENTS
To offer your sympathy during this difficult time, you can now have memorial trees planted in a National Forest in memory of your loved one.
Funeral services provided by:
McKinney - d'Argy Funeral Home
MAKE A DONATION
MEMORIES & CONDOLENCES
Sponsored by McKinney - d'Argy Funeral Home.
1 Entry
What a wonderful memorial service for your Mom. I would loved to have been there to see all of you but it was such a blessing to see it on line. You all had a great tribute to her. She and your Dad and Rev. Berkebile played a very important role in my childhood and teen years. There were probably many ways you guys weren't even aware of. What a blessing they all were.
Thanks for sharing your family with me.
God bless you all.
Linda Yeaney
Friend
January 26, 2021
Showing 1 - 1 of 1 results