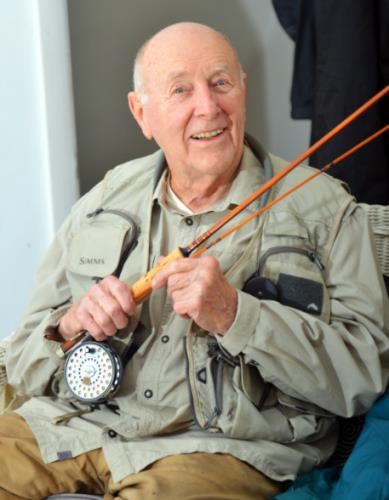 BORN
1935
DIED
2021
FUNERAL HOME
Thomas L. Neilan & Sons Funeral Home - New London
12 Ocean Avenue
New London, CT
UPCOMING SERVICE
Celebration of Life
Apr, 16 2022
2:30p.m. - 5:30p.m.
Westbrook Fishing Club
Send Flowers
Gales Ferry - Curtis Reeves Nelson, 86, passed away Dec. 14, 2021. He left on his final journey as he did for all his adventures, in his own time, from his home in Gales Ferry, after a battle with esophageal cancer and heart failure. Following dinner the previous night, his last words were I love you. Thank you. God bless you.

Curtis was the first son of the late Clarence and Ethel (Beard) Nelson, born Dec. 8, 1935. He was predeceased by both his loving wife of 54 years, Pamela Jackson Nelson, Nov. 1, 2011; and a daughter, Paige Nelson, Feb. 5, 1974. He is survived by his daughter, Beth Jae Nelson Gaucher and her husband Michael; his son, Craig Curtis Nelson and his wife, Michelle (Baudro). He took his role as patriarch of the family seriously staying in contact with his five siblings, Charles Nelson of Utah, Janet Geoghegan of Connecticut, Roger Nelson of Connecticut, Karen Sutera of Connecticut and Thomas Nelson of Virginia. He was immensely proud of his five grandchildren and their families, Nicole Gaucher of New York, Shane Gaucher and his wife Jessica (Beckerman) of Massachusetts, Kyle Nelson and his wife Carolyn (Geils) of Connecticut, Corinne Gaucher and her husband Justin Canfield of Oregon and Hope Nelson Hespeler and her husband Tyler of Connecticut. As a bonus he had four great-grandchildren, Ava Jae Stevcic-Gaucher and Luca Stevcic-Gaucher of New York and Ailyn Gaucher and Emmie Gaucher of Massachusetts. He is survived by numerous nieces and nephews whom he treasured. He bestowed "honorary Nelson" status on two devoted and beloved friends, John J. Crowley of Connecticut and Jennifer Baudro of Michigan.

Curtis graduated from University of Connecticut with a Masters in Mechanical Engineering. He worked at Electric Boat for 35 years and retired at 55. He managed the Advanced Engineering Department and remained close with a group of friends who met for lunch every month since.

Curtis shall be referred to as "Poppy" for the remainder of this writing and for all eternity.

Poppy LOVED fly fishing and fly tying. Following his wedding in Mount Carmel to Pamela Jackson, Aug. 31, 1957, they went fishing on their honeymoon. When three of his five grandchildren were planning their weddings, he reminded them that if they were marrying in September he might not be there. All three took place in September and he was present. September was his annual trip to New Brunswick, Canada to fish the Miramichi River for Atlantic Salmon.

Poppy traveled with his good friend, the late Wes Blair, and wintered for 17 years in Gore, New Zealand fishing for trout and staying with friends on their sheep ranch. It was here he developed a love of Sauvignon Blanc and he kept a journal of his finds.

He was hired by Woods Hole and the University of Alaska to fish for Grayling in Prudhoe Bay, for a two week biologic study. He caught, measured, recorded data and then released the fish.

Poppy enjoyed multiple trips to Bonefish in Spanish Wells Bahamas with his friend, the late, Steve Cicoria and was joined by Kyle on one 3 week stay. Other tropical fishing trips included Belize.

Locally, he was a founding member of the Thames Valley Chapter of Trout Unlimited serving as President for seven years and TU State Council Member and the Fisheries Advisory Committee. He was a founding member of the ConnRi Coastal Fishers and member of the Atlantic Salmon Federation. Poppy belonged to the Westbrook Fishing Club in North Stonington for 35 years. It was here he demonstrated his skills to all his grandchildren and shared some techniques. He was thrilled that Ava Jae and Luca spent some time there with him. He was the Fish and Game Chairman of WBFC for 27 years. He enjoyed stocking the pond as recently as October and sponsored a kid's fishing derby there on Nov. 7, that, to his delight, was attended by Ailyn and Emmie. His other pastime at the Club was playing cribbage with The Cribbage Oldies every Wednesday until 2020. He taught Hope to play and she or Michelle was his opponent almost every evening for the past 10 years.

Poppy had a few other hobbies. He was a hockey player from his childhood in Hamden until he was 60. He was an original founder of Southeastern Connecticut Youth Hockey. Eventually Craig joined as a coach and Kyle as a player. He competed in the Ledyard 5 Person Relays for 20 years, 8 of those with Craig in the racing canoe. Poppy was the "Captain" in Captain Chrome Dome and the Jabbering Trout. If you have driven down his rural road you saw him tending his organic garden, turning compost or mowing his field. Very often he was only dressed in Wellies and swim trunks when working outside in the summer so it was quite a sight! He enjoyed cutting firewood in the 70s with Ledyard kids Beth brought home and was in contact with a number of them until the end.

Poppy was gregarious, jovial, wise, blunt but fair, thoughtful and thought provoking. He remembered the names of all his teachers and professors. He asked a lot of questions. He had an infectious smile. If he didn't know the answer to a question he directed someone to get on their machine (smartphone) and find the answer. He wanted conversation, to keep learning, and for us all to have dreams and goals. One of Poppy's favorite quotes was: "Close your eyes, concentrate and dream for all you're worth." We hope all his dreams have come true.

The family would like to thank the Ledyard Police Department for the support they provided following the loss of Poppy. We would be remiss to not mention the long time care of Dr. Peter Gates and more recently Dr. Sapna Khubchandani and her team at HHC Medical Group Oncology and Hematology.

A Celebration of Life is planned from 2:30 to 5:30 p.m. Saturday, April 16, 2022, at Westbrook Fishing Club. All present and past WBFC members are encouraged to attend as are those who considered him a friend.

Arrangements were handled by Thomas L. Neilan & Sons Funeral Home, 12 Ocean Avenue, New London. Online condolences may be shared at www.neilanfuneralhome.com
Published by The Day on Jan. 4, 2022.
To plant trees in memory, please visit the Sympathy Store.
MEMORIAL EVENTS
Apr
16
Celebration of Life
2:30p.m. - 5:30p.m.
Westbrook Fishing Club
CT
Funeral services provided by:
Thomas L. Neilan & Sons Funeral Home - New London
MAKE A DONATION
MEMORIES & CONDOLENCES
Sponsored by Thomas L. Neilan & Sons Funeral Home - New London.
8 Entries
It was my great pleasure to know Curt and serve with him in the Thames Valley chapter of Trout Unlimited. He was a fine gentleman, a great fisherman and a friend to all. May he rest in the peace of our Lord.
Eric Olsen
Friend
January 6, 2022
Poppy will forever be in my heart. I´ll think of him with every cast and every round of golf. I find comfort knowing he´s with our Dammy up in heaven.
Shane Gaucher
Family
January 6, 2022
In loving memory of Curt. He lived a busy, full life. It's so sad that he's gone. He was a good brother and we shared many experiences and philosophies via the phone in later years. For a long time,he was supported physically by Craig and even received scrumptious daily dinners prepared by Michelle. Craig and Michelle deserve all the accolades possible for their efforts before and after Curt's passing. He will be missed by many.
charles e nelson(Bob)
Family
January 5, 2022
Every outing with Poppy, cane fly rod in hand, pipe in his mouth, was an adventure. No matter where we fished. One such adventure was the Deerfield River in Massachusetts for the ISO hatch. Walking down the road to the next pool I looked behind me. No Curt in sight. Uh oh. I back tracked around a bend and there he was! Fast asleep in the hay field by the side of the road snoring. Rather than wake him, I sat down and organized my fly boxes. It was just a nap he said. LOL! It was a hot day and very humid. An hour later he disappeared again! After a little scouting around, I found him sitting in a spring fed creek near the main stem of the river cooling off. Classic Curt Nelson. I sure do miss him.
Phil Sheffield
Friend
January 4, 2022
Your Dad was certainly an interesting man who lived life to the fullest and always saw the glass as filled to the top I am sure he will be sadly missed by his family and friends. We send our condolences
Jim and lindsay heaslip
January 4, 2022
Curt was a very special person in so many ways. His fly tying and fishing abilities were second to none and his subtle humor could always catch you off guard. Westbrook and the family have had a great loss. My sincere condolences to all.
Dave Meiklem
Friend
January 4, 2022
I'm sorry to be saying goodbye to my friend Curt Nelson but I'm glad that I knew him for many years. He was a great man that lived life to the fullest - and I didn't know to what extent until I read his obituary.
George Mattern
January 4, 2022
On behalf of the Westbrook Fishing Club's members and friends, we extend our deepest condolences on the passing of Curt. He was an incredible person who will be deeply missed by all. Tight lines forever. Jay Crowley, President-Westbrook Fishing Club
Jay Crowley
January 4, 2022
Showing 1 - 8 of 8 results