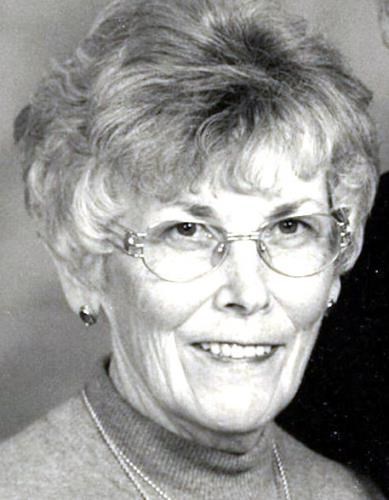 Pat was hospitalized at Lawrence + Memorial Hospital, Aug. 30, 2019, and was subsequently transported to Yale-New Haven Hospital by Life Star helicopter. Physicians at Yale determined that Pat was suffering from severe encephalitis as a result of contracting Eastern Equine Encephalitis. Pat was a strong person who fought courageously 25 years ago to become a breast cancer survivor, but she was unable to overcome the EEE infection. Pat was born March 17, 1942, in Lancaster, Pa., the only child of Lawrence Harrison Ross and Mary Flora (Reinhart) Ross, both of whom predeceased her at the ages of 93 and 92, respectively.

Pat was extremely proud of her Pennsylvania Dutch heritage. She married her high school sweetheart, Dr. Gerald Shaw, a deacon at St. Matthias parish in Est Lyme, Nov. 21, 1964, in Parkesburg, Pa., and together they raised their three sons, Jeffrey (wife Robin) of Exeter R.I., Timothy of Pacifica, Calif., and Charles, of Braintree and Provincetown, Mass. She and her husband were looking forward to the celebration of their fifty-fifth wedding anniversary Nov. 21, 2019.

Pat was a lover of education. She completed her nurses training at the Lancaster General Hospital in 1963, and earned a bachelor of science degree in nursing from Millersville University in Pa. in 1965. She taught psychiatric nursing at St. Francis Hospital in Jersey City, N.J., while her husband completed his medical school education. After having their first son in June of 1966, Pat planned to take six weeks of maternity leave and return to her teaching job immediately, but she enjoyed being a mother so much, that it was several years, two more children, and several relocations later, before she returned to a job outside the house.

Pat was always blessed with a "yearning for learning," as she so often said. She was a voracious reader and was seldom seen without a book in her hand or one within easy reach. It was her goal to read a book a week, which she did. She kept a log of every book she read over the past 25 years. For many years, she served as a volunteer with Literacy Volunteers of America in the Southeastern Connecticut area, teaching those unable to read. She especially enjoyed working with those for whom English was not their native language.

Pat was always a person of deep faith. She was raised in a deeply religious Methodist family in Lancaster County Pennsylvania, where Catholics were few and far between. To the chagrin of many in her family, she managed to fall in love and marry one. After working with the Franciscan Sisters of the Poor at St. Francis Hospital, she was drawn to join the Catholic church, and became a Catholic in April 1966. Since then, she has studied the Catholic faith in addition to living it, teaching it and passing it on to others. In 1998, she earned a master of arts degree in Moral Theology at Holy Apostles College and Seminary in Cromwell.

She has been a life-long lover of animals, not only as pets, but in the wild. She and her husband have owned and cherished many dogs during their life together and her affection for her beloved Samoyeds is well known.

Creative and artistic, she enthusiastically produced many hand-crafted, cross-stitched and needle point gifts for special friends. She also crocheted baby blankets, baby caps and booties that she provided to various charitable organizations. She was generous and kind to all, always bringing laughter and joy to any gathering.

There is so much more that could be said to describe this incredibly unique individual, but her advice always was, "Keep it simple, sweetheart;" so her family will honor her wishes. She will be missed by her loving husband, sons, granddaughters, and all who knew her.

A Mass of Christian Burial will be celebrated at 10 a.m. Wednesday, Sept. 25, at St. Matthias Church, 317 Chesterfield Road, in East Lyme. Pat will be interred at the East Lyme Cemetery immediately following the Mass.

In lieu of flowers, please considering donating to the Humane Society of the United States in her memory. Online condolences may be shared with the family by visiting www.neilanfuneralhome.com.
Published by The Day on Sep. 22, 2019.
To plant trees in memory, please visit the Sympathy Store.
MEMORIAL EVENTS
Sep
24
Visitation
5:00p.m. - 7:00p.m.
Thomas L. Neilan & Sons East Lyme Funeral Home
48 Grand St, Niantic, CT
Sep
25
Mass of Christian Burial
10:00a.m.
St. Matthias Church
317 Chesterfield Road, East Lyme, CT
Sep
25
Interment
East Lyme Cemetery
CT
Funeral services provided by:
Thomas L. Neilan & Sons East Lyme Funeral Home
MAKE A DONATION
MEMORIES & CONDOLENCES
Sponsored by Thomas L. Neilan & Sons East Lyme Funeral Home.
9 Entries
Dear Jerry and family, We are deeply saddened by the loss of your
sweet wife. I asked our Lord, Jesus Christ to put his arms around you
all and comfort you in these difficult days. We will surely miss her.
Bob & Lee Tobin
October 20, 2019
I am so sorry for the loss of your loved one and family member I do not no this courageous woman God Bless
September 25, 2019
Hello Jerry, I remember Pat coming to our permanent diaconate classes at holy apostles College and seminary. That's when I first got to know her. What a wonderful woman. You are a very lucky man, but at the same time she was a very lucky woman to have you. I will miss her, but certainly not as much as you well. I will keep Pat in my prayers along with you and your entire family. Much love to you all, Deacon Michael
Michael Puscas
September 24, 2019
Jerry, We are sorry to hear of Pat's passing. I remember her from Flander's School library. Prayers to you and your family.
Mark and Ann Lepkowski
Ann Lepkowski
September 24, 2019
MY HEART IS SADDEND FOR YOUR LOSS
Sr Veronica. DeVoe
September 24, 2019
Dear Jerry,
We are so saddened to hear of your beloved Pat's passing. We are sorry that we could not be with you but know that you and your loved ones are in our thoughts and prayers.
Tom and Rachel Casey
Tom Casey
September 24, 2019
Dear Deacon Shaw, Please accept my condolences and prayers on the passing of your beloved Pat.
I am terribly sorry.
Jacqueline Keller
September 23, 2019
My sincere love and sympathy to you all - I am so grateful and blessed to have had her in my life. The world was a much better place thanks to her presence and although her earthly light has been dimmed she is no doubt one of the brightest lights in heaven now.
Rita (Mongue) Tassinari
September 23, 2019
So very sad to hear the news. Condolences to all.
Kathleen (Sammataro) McMahon
September 22, 2019
Showing 1 - 9 of 9 results