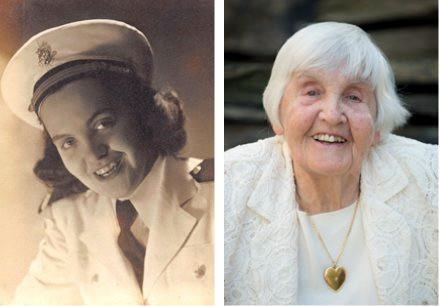 ABOUT
John Jay High School
FUNERAL HOME
Fulton-Theroux Funeral Service
13 Lake Ave
Niantic, CT
Waterford and Salem - After a 99-year lifetime of caring for others, Rita Virginia (Rogers) Bulford is at peace. A World War II Navy Nurse, public health nurse, school nurse and teacher of disabled children, she always put others first. Her fierce, independent spirit is living on in her three children, eleven grandchildren and eight great-grandchildren. She lived on her own well into her 90s, driving, constantly reading, swimming laps at her beloved Waterford Beach, and volunteering.

A resident of Waterford for over 60 years, Rita passed away Oct. 17, 2020, at Bride Brook Health and Rehabilitation in East Lyme where she had lived after suffering from a stroke in September 2019. For the five years prior, Rita had lived with her daughter and son-in-law, Virginia (Bulford) and Victor Vesnaver in Salem.

Rita was born Sept. 2, 1921, in St. John's, Newfoundland, Canada to John Joseph and Effie May (Coish) Rogers. Immigrating to the U.S. as an infant with her parents, Rita spent her formative years in the Park Slope section of Brooklyn, N.Y. graduating from John Jay High School in 1939. She completed nurse's training at Norwegian Lutheran Deaconess Home and Hospital and joined the Navy in October 1943. Rita was stationed throughout the U.S., Guam, and briefly in China. She left active duty in October 1946, having attained the rank of Lieutenant (junior grade) and remained in the Naval Reserve until 1953.

After the war, Rita completed her Bachelor of Arts at Columbia University Teachers College in New York, graduating in June of 1949. While attending Columbia she would often visit her parents who had moved to Norwich where she met her future husband, Robert Edgar Bulford. They were married in May of 1949, settled in Norwich, and moved to Waterford in 1951, where they raised their three children. Rita and Bob had a loving 40-year marriage ending with his death in 1989. Together they enjoyed boating and camping and were active in the U.S. Power Squadron, the Waterford Historical Society and the Waterford Lions Club.

While raising their children, Rita continued with her education and career, earning a Master of Arts by commuting to Southern Connecticut State University in New Haven. She worked first as a public health nurse and then, throughout the Waterford School System as school nurse, social worker and teacher of disabled children. After retiring in 1988, Rita turned her caregiving nature to help friends and family whenever needed. She enjoyed volunteering with the Friends of Harkness, The Garde Arts Center, the Second Congregational Church in New London and the Waterford Republican Women's Club. She was also a member of the American Association of University Women.

Rita is survived by her children, Jane (James) DePasque of Old Saybrook, Robert E. Bulford Jr. (Patricia Ritzert) of Akron, Ohio, and Virginia (Victor) Vesnaver of Salem; her eleven grandchildren; and eight great-grandchildren. She was predeceased by her husband; her parents; her stepfather William Pottle; and her siblings, John H. Rogers and Phyllis Hart.

Rita's loved ones would like to thank the staff at Bride Brook for their unwavering and compassionate care throughout her stay.

The family will celebrate Rita's life at a future date filled with sun and salt water. A tribute webpage at www.fultontherouxniantic.com has been established to view photos, share fond memories, and express condolences.
Published by The Day on Nov. 17, 2020.
To plant trees in memory, please visit the Sympathy Store.
MEMORIAL EVENTS
To offer your sympathy during this difficult time, you can now have memorial trees planted in a National Forest in memory of your loved one.
Funeral services provided by:
Fulton-Theroux Funeral Service
MAKE A DONATION
MEMORIES & CONDOLENCES
Sponsored by Fulton-Theroux Funeral Service.
0 Entries
Be the first to post a memory or condolences.