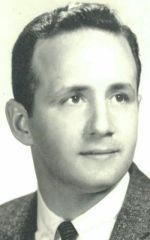 He was born in Hartford, on Oct. 6, 1932, the son of Antonio Marino and Grace M. Marino. He grew up in Rocky Hill, raised his family in Glastonbury, and spent his last 33 years living in Crescent Beach, Niantic. He served honorably in the U.S. Army from 1952-1954 in Washington, D.C., as a presidential honor guard during the Eisenhower administration.

He is survived by his two daughters, Doreen Marino of Martha's Vineyard, Mass., and Deborah Maker and her husband, David P. Maker, of Niantic; his three grandchildren, Geoffrey Maker of Waterford, Lauren Maker Siviski of Windham, Maine, and Abigail Maker of Portland, Maine.

He was also predeceased by his brothers, Milton A. Marino and Anthony J. Marino.

The family extends their heartfelt appreciation to Lisa Thompson, Brian Koneski, and our devoted Hospice Care team for their compassion and kindness through his journey.

A Mass of Christian Burial will be celebrated at 10 a.m. Saturday, Dec. 12, 2015, at St. Agnes Church in Niantic. There will be no calling hours. Interment will be in Rose Hill Cemetery at a later date.

In lieu of flowers, memorial contributions may be directed to the Center for Hospice Care Southeast Connecticut, 227 Dunham St., Norwich, CT 06360.

Please accept my deepest and heartfelt sympathy in the passing of Uncle Bob. I have so many fiond memories of all of us hagning out in the back yard in Gladtonbury. The get togethers with us coming over on the Ferry to see you all (and of course Duchess). Uncle Bob will be sorely missed. But is now with Aunt Joan and keeping an eye on us all. Love always,
Cousin Dave, Sue and Maxkenzie.
David Deane
December 11, 2015
Doreen and Debbie - You're both in my thoughts and prayers and I know that your life-long memories with your dad will bring you some comfort. Take good care.
Georgette LaFleur
December 10, 2015
Doreen and Debbie, was very sad to hear of your Dad's passing, but now he can be in heaven with his true love. Our best to your families at this sad time. Peg and Dick
Chapman
December 10, 2015
Showing 1 - 3 of 3 results