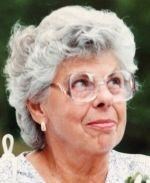 Born Jan. 6, 1922, she was the daughter of the late Delmer A. and Ada Annie (Hayes) Ingalls of Woonsocket, R.I. She was the beloved wife of the late Gordon B. Hall. She was predeceased by a sister, Dorothy (Ingalls) Johnson, and a brother, Dean H. Ingalls.

Ruth was a graduate of Hill College in Woonsocket. She was a member of St. Mark's Episcopal Church in Mystic, Fidelity Chapter, Order of Eastern Star in Niantic, the Groton Emblem Club and NCT, National Camping Travelers.

She devoted many hours of her time volunteering to several organizations including the American Red Cross, St. Mark's Quilters, Special Olympics, CROP Walk, Scouting and the Groton Soup Kitchen.

She enjoyed knitting, reading, traveling and spending time with her children and grandchildren. She will always be remembered for her generous nature and cheerful outlook. She was a wonderful cook and loved to entertain.

A Funeral Eucharist will be celebrated at 10 a.m. on Thursday, Oct. 22, at St. Mark's Episcopal Church, 15 Pearl St., Mystic. Interment will be private in St. Paul's Cemetery, Portsmouth, R.I.

The family would like to thank the entire staff of Academy Point in Mystic for their compassionate and loving care of Ruth during these last several months.

The Dinoto Funeral Home, 17 Pearl St., Mystic, is in charge of arrangements.
Published by The Day on Oct. 18, 2015.
To plant trees in memory, please visit the Sympathy Store.
MEMORIAL EVENTS
To offer your sympathy during this difficult time, you can now have memorial trees planted in a National Forest in memory of your loved one.
Funeral services provided by:
Dinoto Funeral Home
MAKE A DONATION
MEMORIES & CONDOLENCES
2 Entries
Gary and Family,

When I saw the picture, along with the announcement of your Mom's passing, it brought back a lot of memories of going over to your house when we were in High School. She was a sweetheart to all of us and made a lasting impression because of her kindness and warmth. She tolerated us in such a nice way and with a good sense of humor as well.

I think about those days every time I would run, or walk mostly nowadays, past the house on Reynolds Hill.

Your Mom may be gone, but she will not be forgotten. May she rest in peace.
Steve Sutton
October 20, 2015
Ruth and her husband were long time members of NCT (a masonic family camping club). On behalf of National Camping Travelers, Connecticut 1 Chapter 6, I extend our deepest sympathy to Ruth's family for their loss.
Ray Geer
October 19, 2015
Showing 1 - 2 of 2 results