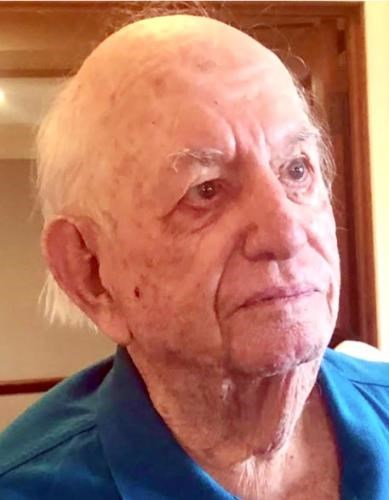 BORN
1927
DIED
2021
FUNERAL HOME
BYLES Memorial Home
99 HUNTINGTON ST
New London, CT
New London - Theodore "Teddy" Irwin was born in New London Sept. 13, 1927, to Morris and Esther Irwin (Itzkowitz). Ted was known for his sense of humor, always having a joke or a clever response to almost any circumstance. He loved to tell stories of his childhood, growing up in New London during the Hurricane of '38 and living at "Old Ocean Beach".

He graduated Bulkeley School, in 1945. Ted was a proud Bulkeley Boy, never missing a reunion or a chance to meet up with his high school friends. He graduated from the University of Vermont in 1950, being a proud member of the Tau Epsilon Phi Fraternity. He served a year in the Army, fittingly being assigned to the canine training unit at Fort Bragg. Upon his graduation, he worked in the family business, the Hudson Shop in downtown New London. In 1965, the store was sold to New London's Redevelopment, Committee, allowing him to go back to school to become a stockbroker at Goodbody and Company, Goodbody and then Merrill Lynch, where he worked until his retirement in 1991.

Teddy married the love of his life, Sylvia Ruth Ragovin, on July 31, 1955. Together they raised two children. He retired early to travel and spend time with his grandchildren. He and Sylvia embarked on trips around Europe and Israel. He also enjoyed traveling with his sister and brother-in-law, Florence and Bill, throughout the United States. He was a devoted husband who did everything he could to make Sylvia's life with Parkinson's Disease the best it could have been.

Sports has always played a big part in Ted's life, from the time he played basketball for the Bulkeley Tigers, to cheering for the New London Whalers and UConn Basketball. Right up until his death he continued to watch the Yankees, the Giants and to his family's disapproval, the Patriots. He was a member of Beth El Synagogue and a longtime member of the New London Lions Club, where he served as President.

Ted was predeceased by his parents, Esther and Morris; his wife, Sylvia in 2004; brother Dr. Charles Irwin; sister and brother-in-law, Florence and Bill Berman; and his grand dogs, Einstein and Maggie. He is survived by his son Craig Irwin, his wife Faith and their children, Marissa (Zack Lerner) and Billy; his daughter Jamie Irwin Stavropoulos, her husband John and their children, Elisha and Lauren.

The family would like to thank the staff at Bride Brook Health and Rehab and his devoted caregivers, Lois, Judy and Doreen who became part of the family.

A graveside service will be held 1 p.m. Wednesday, at the Beth El Community Cemetery of Eastern Connecticut, Groton. Facemasks will be required. Byles Memorial Home, 99 Huntington St., New London is assisting with the arrangements. In lieu of flowers, donations in his memory may be made to The Leonard H. Bulkeley Scholarship Fund www.bulkeleyscholar.org Please visit www.Byles.com to sign the guestbook or to share a memory.
Published by The Day on Sep. 14, 2021.
To plant trees in memory, please visit the Sympathy Store.
MEMORIAL EVENTS
Sep
15
Graveside service
1:00p.m.
Beth El Community Cemetery of Eastern Connecticut
Groton, CT
Funeral services provided by:
BYLES Memorial Home
MAKE A DONATION
MEMORIES & CONDOLENCES
Sponsored by BYLES Memorial Home.
8 Entries
Ted was a long-time dear friend
Mendy and Shirley GOTTESDIENER
Friend
October 12, 2021
Sending our deepest condolences to you and your family.
Esther and Les Morrell
September 14, 2021
Craig and Jamie and Families, I am sorry for your loss. A true Bulkeley Boy.
George Synodi
September 14, 2021
I was Ted’s Caretaker for more than three years. He had me laughing so many times that I cried. He had such a positive outlook on life. I will miss him very much
Judy Varley
Friend
September 14, 2021
My deepest sympathy goes out to the family of Ted Irwin. May you find comfort in all of the memories.
Helene Lamchick
Friend
September 14, 2021
I hope your new trip will be a great time reuniting with the love of your life.
Doreen Linder
Friend
September 14, 2021
Ted was one of the greatest men I have known....he taught me so much of how to be a nice human being. I have many awesome memories to remember.
Thank you Ted for sharing your life with me.
Sincerely Doreen Linder
Doreen Linder
Friend
September 14, 2021
Jammie so sorry about your dad
Gina debona carter
September 14, 2021
Showing 1 - 8 of 8 results