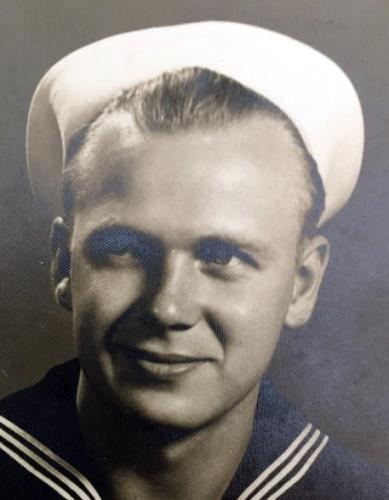 Walter was a lifelong resident of Norwich. He graduated from Norwich Free Academy in 1941. He enlisted in the United States Navy in 1942 and served for the duration of World War II. He served in Kodiak, Alaska and aboard the USS Cape Gloucester, and at the Battle of Okinawa. He was honorably discharged in November 1945.

During the war he married Catherine A. Morell in Tacoma, Wash. in January 1945.

Upon his return to civilian life, he resided in Norwich with his wife. He worked construction and as a mason on several area buildings. He also worked for Robert Geer and Continental Can until he and his wife purchased Laurel Gift & Card Shoppe in downtown Norwich in the mid-seventies. They also ran the Whistle Stop Craft & Hobby Store in Groton.

He was a past President of the Norwich Downtown Association during the 1980s. He and his wife witnessed the decline of the downtown shopping area but held out hope it would return.

He was predeceased by his wife Catherine in February 1998.

In lieu of flowers, please consider a gift to St. Patrick School or Cathedral.
Published by The Day on Oct. 22, 2021.
To plant trees in memory, please visit the Sympathy Store.
MEMORIAL EVENTS
Oct
24
Calling hours
5:00p.m. - 7:00p.m.
Labenski Funeral Home
107 Boswell Avenue, Norwich, CT
Oct
25
Funeral
9:00a.m.
Labenski Funeral Home
107 Boswell Avenue, Norwich, CT
Oct
25
Mass of Christian Burial
10:00a.m.
St. Patrick Cathedral
213 Broadway, Norwich, CT
Oct
25
Interment
St. Joseph Cemetery
Boswell Avenue, Norwich, CT
Funeral services provided by:
Labenski Funeral Home
MAKE A DONATION
MEMORIES & CONDOLENCES
Sponsored by Labenski Funeral Home.
3 Entries
I will always treasure the conversation that Walter and I had when volunteering at Santa's Headquarters,Norwich winter Festival. Such a precious memory, I'm blessed to have had that time with him.
Angela
October 26, 2021
RIP Shipmate, your watch is over.
Tim Grace
October 22, 2021
Paul and Kathleen, I am so sorry to learn of the passing of your Dad. May he live on in your memories. Again, my sincerest condolences. God Bless you and your Family.
Dan Civco
Friend
October 22, 2021
Showing 1 - 3 of 3 results