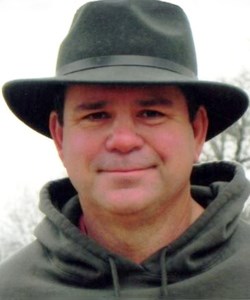 Charles Edward "Beau" Cavanaugh II was called by the Lord and entered the Kingdom of Heaven on July 10, 2021.

Beau was born January 9, 1961, proud son of his parents, Charles and Jane Bartosh Cavanaugh and he was baptized and member of Christ Our Light Catholic Church. He grew up on his family's ranch helping his father in his agriculture chemical business and enjoying his mother's good cooking. He and his friends enjoyed many good times during his school years including riding bikes into town, camping, going on hay rides, hunting, family fishing trips to the Texas Gulf Coast, drive-in movies, attending social events and dances and spending time with his family watching Dallas Cowboys football on TV, with his father, "Mr. C.", making nachos .

Beau was a member of the Navasota Rattler football team graduating from Navasota High School in 1979 being named Most Versatile in the yearbook. He attended Sam Houston State University, was employed briefly by Schultz and subsequently began a rewarding career with Gulf States/Entergy power utility company's Navasota network for 35 years serving as a lineman and service technician.

On February 11, 1995, he married Janet Sue Bauer whom he had met and known since their preschool days at Joan Duncan's Play School in Navasota, and enjoyed spending many holidays and gatherings with his extended family who loved him very much. They shared many common interests. They were blessed with two proud sons, Charles Edward "Chas" Cavanaugh III and Christopher Keefe Cavanaugh who brought them both great joy. They enjoyed attending their sons' activities including Little League and many football games including the football playoffs and winning the 2012 and 2014 State Football Championships. He was a loving father and mastered the art of teasing his sons, as well as all his friends, in their misadventures (as his own father had done with him) and missed few opportunities to do so which they hold dear to their heart and will remember forever. In the fall, he could be found planting food plots for deer and hunting dove and waterfowl. In the spring he enjoyed planting and gardening. Throughout the year, one of his best times was barbequing for his family. Beau was faithful to his work and his family. He was a wonderful human being who was easy to be around, kind hearted, forgiving, and an understanding friend with an easy sense of humor.

He was blessed to have lifelong friends Butch, Chuck, Richard, James, Glenn, Bill, David, Gary, Cody, John, and many others whom he cherished and who faithfully visited him in the hospital during his illness driving to see him, spending time with him, bringing him his favorite food and helping with anything they determined he might need. We are so thankful, blessed, and lucky to have had him in our lives, and will miss his steadfast and faithful companionship. Lives were enriched and the world is a better place with Beau being a part of it.

You are invited to sign the guestbook and leave condolences for the family at www.lindleyrobertsonholt.com.

Published by The Bryan-College Station Eagle on Jul. 14, 2021.
To plant trees in memory, please visit the Sympathy Store.
MEMORIAL EVENTS
Jul
14
Memorial Gathering
5:30p.m. - 7:00p.m.
Christ Our Light Catholic Church
9577 Hwy 6, Navasota, TX
Jul
14
Vigil
7:00p.m.
Christ Our Light Catholic Church
9577 Hwy 6, Navasota, TX
Jul
15
Funeral Mass
10:00a.m.
Christ Our Light Catholic Church
9577 Hwy 6, Navasota, TX
Jul
15
Committal
Cavanaugh Family Cemetery
TX
Funeral services provided by:
Lindley-Robertson-Holt Funeral Home - Navasota
MAKE A DONATION
MEMORIES & CONDOLENCES
Sponsored by Lindley-Robertson-Holt Funeral Home - Navasota.
10 Entries
So sorry to hear the sad news. Our deepest sympathy to all the family. Sending our love and prayers
Jim and Dorothy (Arrington) Hassell
Dorothy A. Hassell
Friend
July 15, 2021
I am so sorry for your loss. May God comfort all who mourn Beau's death and fill your hearts with memories of times you shared with him.
Debbie Alexander
July 15, 2021
I was shocked to hear the news about Beau. I grew up with his dad " Charlie " and I am sure they are resting in peace with the lord. My heart goes out to the family and friends ---May God Be With YOU, BEAU !!
Randy Marsh
July 15, 2021
So sorry to hear of Beau's passing! My sister Sandra attended kindergarten and then school with Beau and Janet! Our deepest condolences to his family! He was such a sweet guy! RIP Beau!
Cindy Torres Hughey
Acquaintance
July 14, 2021
Ronnie & Lou Podraza
July 13, 2021
Nadine McVey
July 13, 2021
My Prayers and Condolences to the Family!
Scheharyl Sauls Fry
Classmate
July 13, 2021
My deepest sympathies, he was such a good person. I knew him from school.
Phyllis Pruitt
Friend
July 12, 2021
I'm so saddened to hear about Beau,he was such an awesome person.My childhood friend.God speed him to heaven.. prayers for the family.. Love God bless Sandra Torres Giles
Sandra Torres Giles
Classmate
July 12, 2021
Our sympathy and prayers to Beau’s family. He was certainly an exceptional man. He is now resting in peace without illness. Janet, Chas and Chris may God give his love and comfort to you now and always and to Jane, Pat, and the entire family. Love and hugs.
Dennis and Janis Frenzel
Janis Frenzel
Friend
July 12, 2021
Showing 1 - 10 of 10 results